Why cities should stop building museums -- and instead focus on festivals 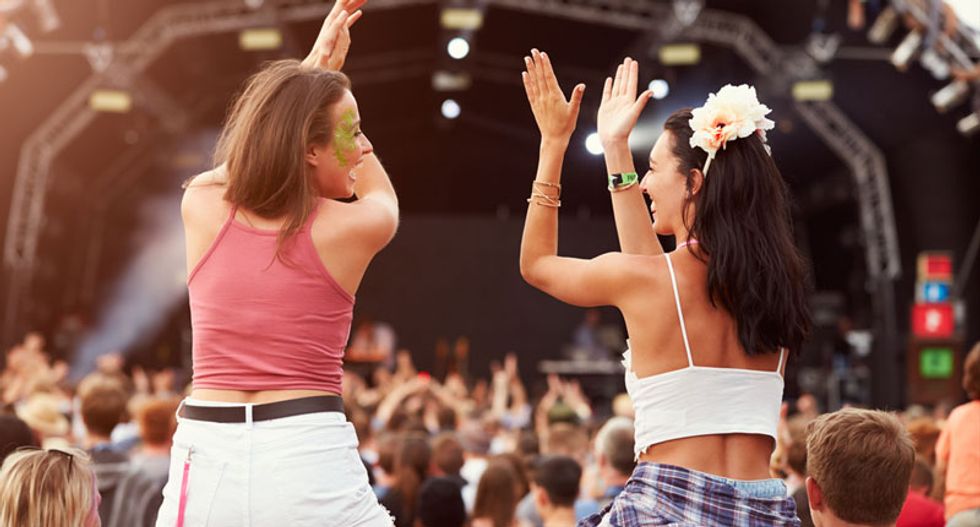 Women at a music festival (Shutterstock)

Last year the Institute of Museum and Library Services offered a catchy statistic: the United States has more museums than all the Starbucks and McDonald’s combined.

It’s easy to understand why cities will leap at the opportunity to invest in new structures: “Starchitect”-designed buildings, from the Santiago Calatrava-designed Milwaukee Art Museum to Brooklyn’s undulating Barclays Center, could add an iconic image to the cityscape and garner positive media buzz.

However, such massive public investments in permanent structures (what I’ve dubbed “concrete culture”) are bad deals and bad policy for urban economic development. Once the hoopla fades, cities can be saddled with millions in debt and mixed results. Take, for example, Charlotte’s NASCAR museum. Built in 2010 at a cost of US$160 million, the facility has not met attendance projections and, according to the Charlotte Observer, is losing $1 million a year.

Given the economic costs and risks, why do museums, stadiums and other “concrete culture” receive such a privileged place in urban development? After spending the past 10 years conducting research on the topic, I’ve found that this privilege should end; as an alternative, cities should champion music festivals as a cheaper, adaptable way to bolster urban communities.

The cracks of concrete culture

America – as Pacific Standard says – “has a stadium problem.”

From 1990 to 2010, over 100 sports stadiums opened across the country. Economists have long argued that these are dreadful public investments for myriad reasons: they’ve been shown to stall economic growth, become underused eyesores and fleece local taxpayers. Billionaire sports team owners profit immensely from sports stadiums and – in many cases – don’t spend a dime on their construction.

While museums and performing arts centers are often nonprofits, they require cobbled-together funding from a variety of sources, ranging from corporate philanthropy to federal, state and local governments. These, too, have come at a cost. The University of Chicago’s Cultural Policy Center found that a whopping 725 arts and cultural facilities were built in the U.S. from 1994 to 2008. Construction didn’t just greatly outpace demand; it also overextended public resources. Though they cost over $15.5 billion to build, only 12 percent of the cultural institutions that were surveyed for the report saw increases in attendance.

Museums, stadiums and other permanent structures purport to revive deteriorating parts of the city. In some cases they do. In other cases, rosy expectations aren’t met. Museums struggle in recessions, while stadiums like Washington, D.C.’s Washington Coliseum and Houston’s Astrodome are left derelict. The New York Times notes that, with the NFL’s St. Louis Rams' relocation to Los Angeles, St. Louis dodges a fiscal bullet by not having to sign a bad stadium deal. The city wins by losing.

Meanwhile, invasive “mega events” like the Super Bowl, the Olympics and the World Cup can be economic and cultural calamities for their communities as well. Economist Andrew Zimbalist’s book “Circus Maximus” notes that, beyond prestige and perhaps some tourist revenue, these events create concrete cultural infrastructure that monopolize scarce real estate, leaving spaces underutilized for decades.

There is a cheaper, more equitable path toward creating culturally vibrant cities, one that requires less public funding and much less steel and glass.

Billboard has noted that over 32 million people attended U.S. music festivals in 2014, and popular festivals can sell out within hours, even before announcing the lineup of acts.

Music festivals have become popular for three reasons. First, musicians and music labels are eager to perform live to offset declining record sales. Next, today’s music fans are seeking out more and more live performances. And third, municipalities – in an era of intense urban branding and competition for tourists – are becoming amenable to developing music- and event-friendly policies.

Unlike permanent stadiums and museums, festivals are nimble; they’re able to switch venues and change up programming if necessary. They’re also much more inclusive. Many are free to the public, utilize existing public spaces and cultural assets, spark interactions among community members and nurture positive images of urban areas, especially neighborhoods that might need a boost.

A model for the 21st-century city

Recognizing the value in cultivating events, cities like Nashville and Austin have learned to promote a festival-friendly environment over the last decade. Both cities established entertainment zones that balance relaxed noise ordinances with affordable, mixed-use housing. At the same time, these cities champion their distinctive character and communities by embracing their festivals as “signature events.”

These cities have made it easier to hold cultural events by streamlining the permitting process and allowing public parks to be used. Even their city halls have designated offices devoted to culture and music that wield bureaucratic influence and act as liaisons with local arts organizations. Some cities have even established a new position: night mayor.

In Austin, SXSW coordinates with some local nonprofits and artistic groups to better serve the local communities by offering legal, health and housing services for working musicians.

In Nashville, the Country Music Association Festival funnels millions of dollars into grade school education through its “Music Makes Us” program.

Now other cities are following their lead.

In New England, a burgeoning scene of club owners and musicians congregate each year at Newport’s Jazz and Folk festivals, where they leverage local resources to attain international notoriety. Up-and-coming musicians have a voice in the festival’s planning as members of the Newport Festival Advisory Board. They can also influence resource distribution by directing fundraising to targeted local groups.

Replicating these successes can be challenging. Research has indicated that festivals sometimes exclude local residents, and many events become vulnerable to overcommercialization. Brands, for example, often flood the visual landscape of these festivals. When I began conducting research at the Newport Folk Festival, it was the Dunkin' Donuts Newport Folk Festival, and nearly every surface of the facility seemed to be sheathed in corporate pink, orange, and brown. (The festival has since become a 501c3 nonprofit corporation, and now brands have a more muted profile at the event.)

Some might wonder if it’s worth investing in something that leaves after only a few days. But the impermanence of festivals is a feature, not a flaw. Festivals are adaptable, using spaces that might otherwise go unoccupied, and they can act as platforms for existing local artistic groups.

As Toronto Mayor John Tory noted in his introduction to the 2016 Canadian Music Week’s Music City Summit, building buildings can be risky.

“We should build the events,” he said, “and maybe a building will follow.”

Lawyers for the nation's largest manufacturer of electronic voting equipment are trying to squash legitimate criticism of their products—including one machine that was responsible for a 26,000-vote miscount and threw a one local election in Pennsylvania into doubt.

A Wall Street law firm representing Election Systems & Software LLC of Omaha, Neb., has sent a cease and desist letter to election reform advocacy group SMART Elections demanding that it "retract and correct" its criticism of the ES&S ExpressVote XL touch-screen voting machines—especially the group's effort to persuade the New York State Board of Election from certifying the machines for using in elections there. The state board is scheduled to take up the matter today (Jan. 28).

One of President Donald Trump's supporters met with VICE News reporter Michael Moynihan to reveal that the Jan. 6 attack isn't over.

The interview comes the same day as the Department of Homeland Security issued a bulletin that anti-government extremists are intent on domestic terrorism.

Despite the widespread coverage of and attention to the Jan. 6 attack on the U.S. Capitol by pro-Trump insurrectionists, law enforcement agencies been largely reticent to provide direct briefings to the press and updates for the public about what happened.

But on Wednesday, a statement from the Capitol Police Union, the officers on the front lines of the siege, shared new details and assessments of the attack that weren't previously known. It added new information in response to the closed-door testimony of Yogananda Pittman on Tuesday, the acting head of the U.S. Capitol Police, whose remarks were reported by multiple outlets.