Wildfires in West have gotten bigger, more frequent and longer since the 1980s 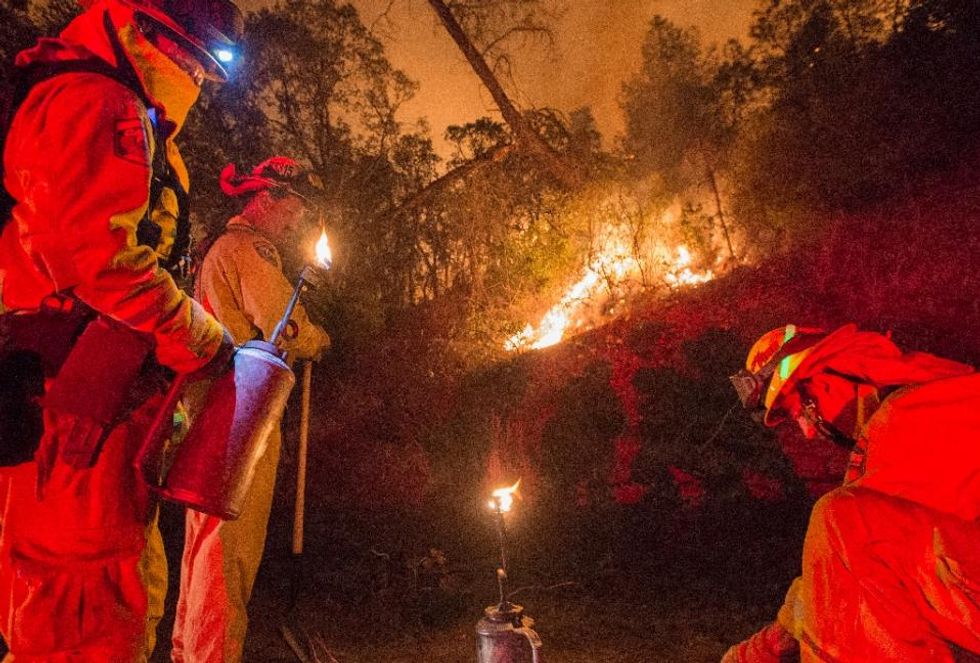 Firefighters light back fires in an attempt to control the Rocky fire near Clear Lake, California on August 2, 2015 (AFP Photo/Josh Edelson)

Dramatic images of out-of-control wildfires in western North American forests have appeared on our television and computer screens with increasing regularity in recent decades, while costs of fire suppression have soared. In 2015, federal spending on suppression exceeded US$2 billion, just 15 years after first exceeding $1 billion. Something has been changing our fire seasons.

There are competing explanations for why wildfires have been increasing, particularly in our forests. I’ve been studying the science of climate and wildfires for more than 15 years and the take-home message from our research is that, while our management of the landscape can influence wildfire in many different ways, it is a warming climate that is drying out western U.S. forests and leading to more, larger wildfires and a longer wildfire season.

A look at the latest data

Ten years ago, several colleagues and I set out to see if we could quantify the changes in wildfire, particularly in mountain forests of the western U.S. We wanted to see if climate might be causing some of the increase in wildfire.

In our paper, we concluded that wildfire had indeed increased substantially in western U.S. forests beginning in the 1980s. We also found that most of this increase was from fires burning primarily in mid-elevation northern U.S. Rocky Mountain forests in years with an early snowmelt.

Our latest research shows that wildfire activity in western U.S. forests has continued to increase, decade by decade, since the 1980s.

We looked at federally managed forests in the Sierra Nevada, Southwest, Pacific Northwest, and northern and southern Rockies. Over the decade through 2012, large fires (fires greater than 1,000 acres or 400 hectares) were 556 percent more frequent than in the 1970s and early 1980s. And the area affected increased even more dramatically: the forest area burned in large fires between 2003 and 2012 was more than 1,200 percent greater than in the period between 1973 and 1982.

The area burned in the northern U.S. Rockies has increased by 3,000 percent, accounting for half of the increase in the western U.S. But fire activity has recently accelerated in Southwest and Pacific Northwest forests as well. The area of burned forest in the Southwest increased over 1,200 percent, and in the Northwest by nearly 5,000 percent.

The only forest area where we could not robustly detect an increase in large fires and burned area was in coastal southern California. There, the largest fires are human-ignited, take place in the fall (driven by Santa Ana winds) and burn primarily in chaparral or shrubland. The small number of forest fires in southern California, combined with high variability from year to year, meant we could not detect trends there, nor attribute them to specific causes.

At the same time, the number of large fires in the West and the area they affect have been increasing in drier, lower elevation grass and shrublands, although to a much lesser extent. For example, the area burned in nonforest vegetation in lands managed by several federal agencies (the Forest Service, Park Service and Bureau of Indian Affairs) has been increasing about 65 percent per decade as compared to the 1970s average, for the past three decades.

The sharp increase in the amount of land being burned in recent decades across all vegetation types is not just due to more wildfires.

In fact, the total number of reported wildfire ignitions does not appear to have gone up. However, the number of large (greater than 1,000 acres or 400 hectares) wildfires has been growing since the 1980s, and the area burned in these fires has grown even more. Wildfires, in other words, are growing in size.

The length of the fire season has also grown throughout the last four decades, with large fires igniting earlier in the spring and later in the autumn than previously, and burning for longer. In the period between 2003 and 2012, the average burn time for individual fires was 52 days. In the 1973-1982 period, it was just six days. 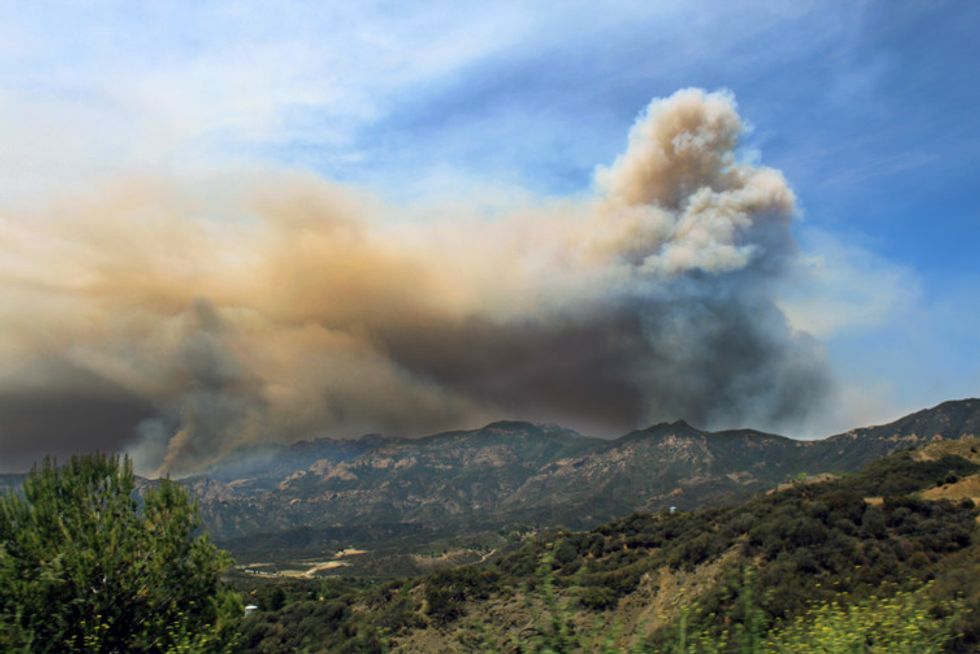 A review of fire data since the 1980s shows that fires in forests and other forms of vegetation have increased dramatically.

The fire season – defined as the time elapsed between the first large fire ignition and last large fire control – went from 138 days in the 1970s to 222 days in the last decade, for an increase of 84 days.

The burn duration has increased steadily decade by decade as well, and in each of the five forest areas we studied. In 1973-82 there were years in each forest studied without large fires. By the most recent decade, every year saw some large fires in every forest area.

These changes in wildfires are strongly linked to drying from warming temperatures and earlier spring snowmelt.

For example, the number of large forest fires is strongly correlated with spring and summer temperatures in each region. The years with the earliest spring snowmelt, which was one-third of the total number of years we studied, account for more than 70 percent of the area burned in large forest wildfires, and 43 percent of the area burned in nonforest fires.

Indeed, most large forest wildfires in the West occurred in warmer years with earlier spring snowmelt. There was, however, a lot of variation across different forest areas.

Forests that historically had large areas with no snow on the ground for two to four months and high moisture loss from soils and vegetation in spring and summer have seen the biggest increases in wildfire in early spring snowmelt years (for example, the northern Rockies and parts of the Sierra Nevada). 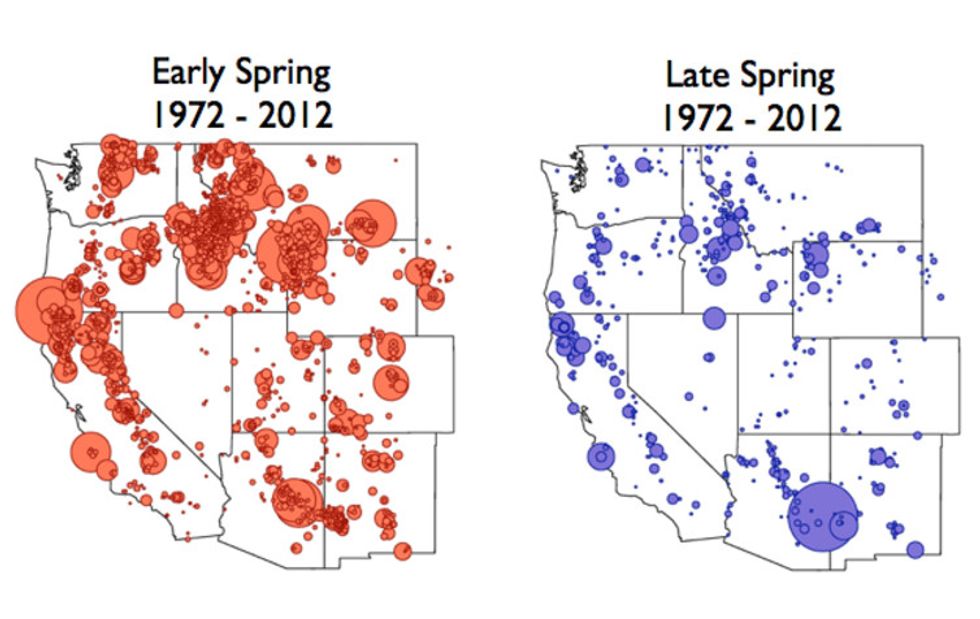 Since the beginning of comprehensive records in the 1970s, most large fires have occurred in years with early spring snowmelt. Fires depicted here range from 1,000 acres (400 hectares) to half a million acres (200,000 hectares). Fires are scaled by size, but not proportionate to the map.

In contrast, substantial increase in wildfires in the Southwest were not strongly correlated with changes in the timing of spring snowmelt. This might in part be due to the spring timing index we used, which is more representative of conditions in the Rockies than of conditions in the Southwest. It is also true that land use and fire suppression have had particularly potent effects on forests there, with increases in fuels contributing to changes in wildfire.

Overall, warmer temperatures and earlier snowmelt have contributed to drier conditions. But cooler, more moist forests, such as those in the northern Rockies, have seen the greatest drying due to changes in the timing of spring, and the greatest changes in forest wildfire.

Our review of historical data demonstrates how closely linked drier years and earlier springs are to the frequency of wildfires. Given projections for further drying in the West due to human-induced warming, this study points to a future with more wildfire activity.