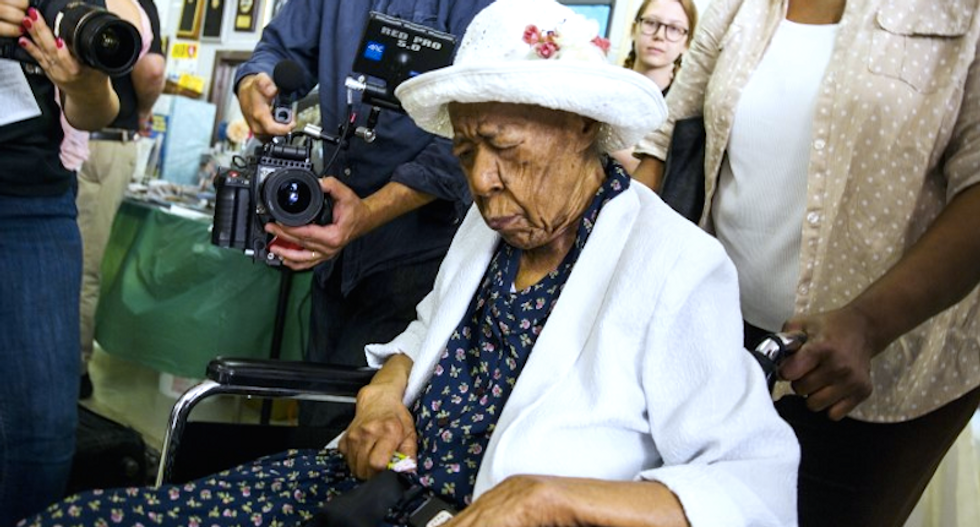 Susannah Mushatt Jones (C), known as "Miss Susie" is wheeled into a celebration for her 116th birthday with family members, local dignitaries, and friends in the Brooklyn borough of New York, July 7, 2015. (REUTERS/Lucas Jackson)

Jones' death makes Emma Morano-Martinuzzi, a 116-year-old woman in Italy, the oldest living person, according to the Gerontology Research Group.

Jones, who was born in the southern U.S. state of Alabama in 1899, was the daughter of sharecroppers and granddaughter of slaves.

After graduating from high school she moved north in 1922 to New Jersey and then New York, where she worked as a housekeeper and childcare provider, according to Guinness World Records and the Vandalia Senior Center in the New York City borough of Brooklyn, where she lived.

Jones, who retired in 1965, had said that lots of sleep is the secret to her longevity and that she had never smoked or drank alcohol.

The oldest verified person was Jeanne Calment of France, who died in 1997 at 122 years and 164 days, the research group said.

(Reporting by Brendan O'Brien in Milwaukee; Editing by Toby Chopra)