You'll be surprised by what the Bible really says about incest 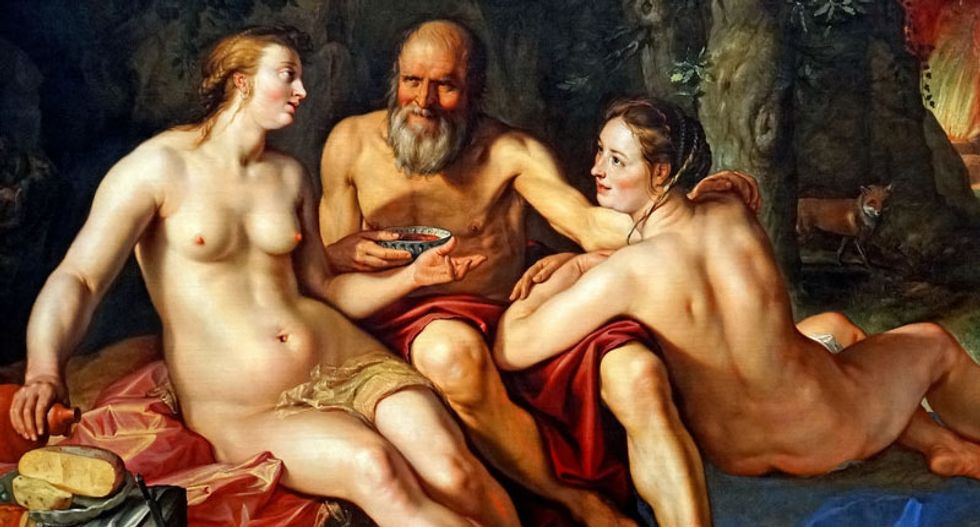 Lot and his daughters, by Hendrick Goltzius, 1616. (Dennis Jarvis/Flickr)

Incest sparks strong emotions – and today, in many cultures at least, they are largely negative. But has it always been thus? Or is the taboo peculiar to certain times and places?

Incest taboos are often said to be universal – and sex with a close relative (one’s parent, child, or sibling) is widely considered particularly depraved, as well as detrimental and stigmatising for any offspring who might result from such a union.

Such figures as Josef Fritzl and Frederick West have scaled the heights of notoriety in part because of violent, exploitative incest committed against their own children.

And yet incest also seems to be everywhere: in high and low-brow literature – from Virginia Andrews’ Flowers in the Attic to Arundhati Roy’s The God of Small Things – as well as in film and especially popular television – think Game of Thrones, Brookside, Hollyoaks and Emmerdale. It is also a trope in gothic horror.

Curiously, too, in popular culture, incest is not infrequently depicted as consensual and – especially when it is between a good-looking brother and sister – even as romantic.

Nevertheless, judging from the press over the last few weeks, anyone would think that familial sexual relationships were a completely new phenomenon and that until recently, incest was kept at bay by strong social taboos. However, whether familial sexual relationships are indeed considered to be incestuous (that is, illegal, even criminal) or not depends on the social and cultural context. Moreover, attitudes to incest tend to be gendered and heteronormative.

With relatives who were once separated increasingly able to trace each other (through DNA testing, social media, and reunion services), stories of siblings, or of a parent and childreunited are more common. And not infrequently, such reunions transpire in mutual attraction and love – which has been hitting the headlines recently.

A taboo too far?

Some of the public conversations now turn to whether incestuous unions – where they are consensual and between adults – should be tolerated and decriminalised. Indeed, in Sweden half-sibling marriage is already legal and the jurisdictions of some other countries, too, do not penalise such acts.

Media stories only portray heterosexual familial partnerships, however, so there’s precious little coverage on brothers or male close family relations who’ve experienced GSA after a period of separation. That’s not to say it hasn’t happened, of course, but the coverage says a great deal about such being a cultural “taboo too far” for us. By contrast, popular cultural representations of heterosexual sibling incest is often eroticised, with the woman frequently portrayed as a feminine ideal: beautiful and sexy. In such story lines, incestuous relationships function to add an extra thrill of the illicit. The most recent public examples of GSA, however, reveal the mundanity of many of the cases, despite the scandalous tenor of the journalists.

Despite the seemingly clear rules around incestuous relationships – just as popular culture toys with the titillation and taboo of the topic – biblical depiction is ambiguous. Yes, there are the Levitical laws that prohibit sex with a string of family members (one’s sibling, parent, certain in-laws … but not one’s son or daughter!), but then there is also the story of Lot’s daughters in Genesis 19, seducing their father and bearing sons, which offers no (certainly no explicit) reproof. The daughters even draw attention to incest by calling their sons “Moab” (Hebrew for “from the father”) and “Ben-Ammi” (“son of my people”)!

The revered patriarch Abraham mentions rather casually that his wife, Sarah, is also his half-sister. David’s son Amnon becomes obsessed with and rapes his sister Tamar. This event is certainly depicted as villainous and cruel on Amnon’s part but Tamar’s words, as she tries to prevent the rape, suggest sibling marriage is an option.

Close-kin marriages – between fathers and daughters and between siblings – were certainly known in Egypt, right up to and including Cleopatra, who married two of her brothers consecutively.

The Bible, as usual, however, offers no clear advice going forward.