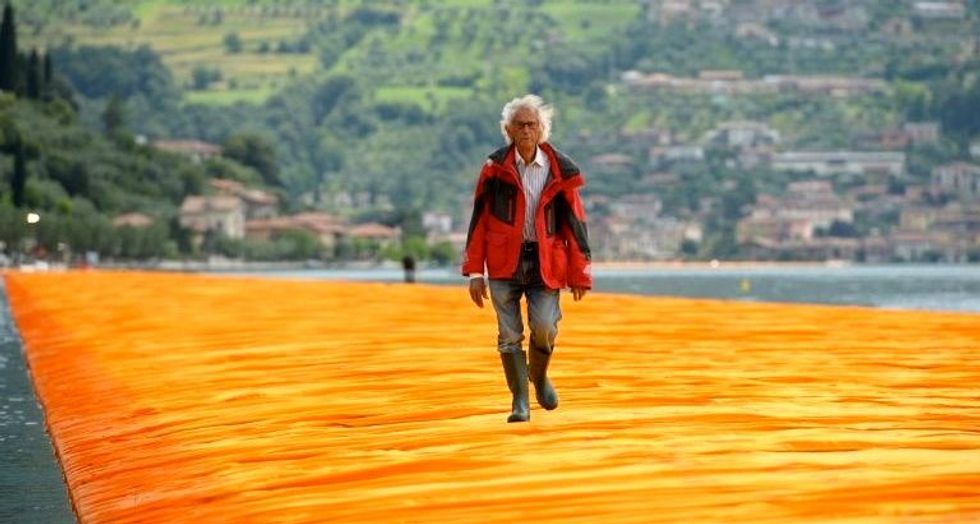 Renowned artist Christo Vladimirov Javacheff can walk on water. And thanks to him so can you.

Wearing dark wellington boots, a red and black all-weather coat, jeans and a smart striped shirt, Christo -- as he is universally known -- crossed his hands while standing in the middle of Lake Iseo in northern Italy.

All that separated him and the vast body of water was 200,000 floating cubes covered in orange fabric, creating a three kilometre-long (1.9 miles) runway that connects the village of Sulzano to the small island of Monte Isola on the lake.

"It's a very physical project, you need to go there (to understand it)," he said Thursday of the project called "The Floating Piers" which will open to the public from June 18 to July 3.

"It's not a painting, it's not a sculpture. You need to walk on it... feel it with the sun, with the rain, with the wind. It's physical, not virtual."

First conceived in 1970 for the River Plate delta in Argentina, the Christ-like project that Christo, 81, devised with his late wife Jeanne-Claude has finally been resurrected.

Despite the long delay in realising his vision Christo said the project, his first since 2005, "stayed in our hearts".

Forced to abandon the aquatic walkways in Argentina, then again in Japan due to permit troubles, the piers exhibition got the go-ahead in just two years in Italy, thanks to the enthusiasm of local officials and nearby residents.

Project director Germano Celant described the speed with which it has been accomplished as "a miracle".

Made of 200,000 recyclable polyethylene cubes linked by 200,000 giant screws, the piers are covered with dahlia-yellow fabric made of tightly woven nylon designed to change tone as the sun sets and become an intense red when wet.

This is not Christo's first artistic outing in Italy.

Christo and Jeanne-Claude, both born in June 13, 1935, brought three projects to the country in the 1960s and 1970s, including an installation on Milan's Cathedral square in which they wrapped a monument to King Vittorio Emanuele.

The couple first rose to fame for their eye-catching packaging of famous landmarks like the Pont Neuf across the Seine in Paris in 1985 and Berlin's Reichstag in 1995 -- a project which took almost a quarter of a century of bureaucratic wrangling to get off the ground.

Describing his passion for reimagining objects with audacious wrapping and packaging, Christo said: "I don't like to talk on the telephone, I don't know how to drive cars... I'm interested (in the) real thing."

"The Floating Piers" cost 15 million euros ($16.7 million) to create but will be free to the public and is expected to attract 500,000 visitors by the time it closes.

It was funded as is typical for Christo's works by the sale of his blueprints and design models.

Local businesses are already hoping to cash-in on the cultural phenomenon described by The New York Times as one of the "musts" of the year.

Michele Pescali, a bakery owner based close to the lake, has created a line of "Christo biscuits" for the occasion made of pastry covered with jam and orange peel reminiscent of the artificial pontoons.

Some visitors like Almut and Walter Horstmann from Germany arrived days early so as not to miss the final stage of installation.

"We wanted to see the construction work. We already saw the Reichstag, the wrapped trees in Basel, the wall of oil barrels, the Oberhausen gas holder in Germany," said Walter, 75.

He described Christo's latest feat as "fantastic, with this mix of water, countryside, colour and fabric".

And fans of the octogenarian genius need not fear that Christo is winding down.

He is now thought to be awaiting approval for two projects, one in the US and the other in Abu Dhabi.

Asked if he plans to hang up his welly boots and settle down, he said simply: "Artists do not retire, they die."