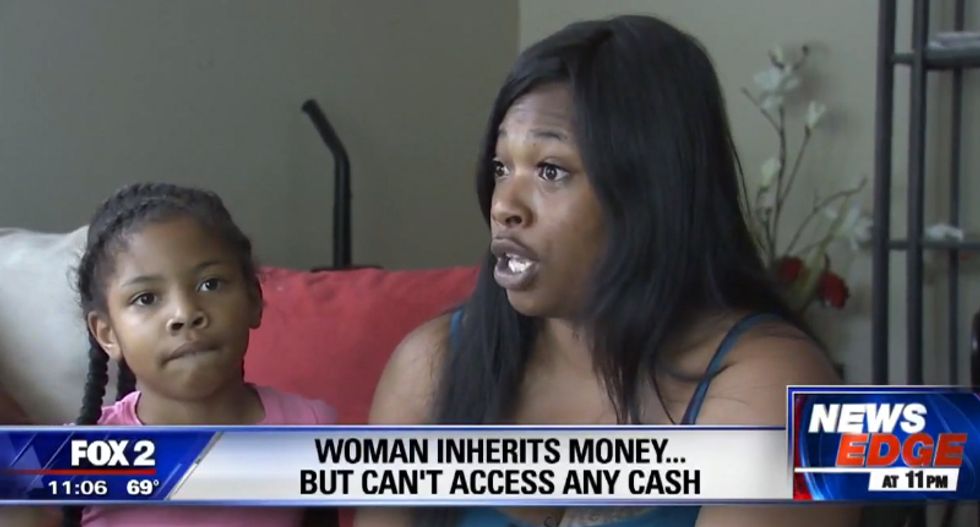 A Detroit woman is accusing Bank of America of discrimination after they placed a hold on money she received as part of an insurance settlement over the death of her brother -- and then accused her of fraud.

Christina Anderson, a single mother of four, told Fox News 2 Detroit that her younger brother recently died and she received $50,000 as part of insurance settlement that was wired directly to her account with Bank of America on May 20.

According to Anderson, the bank told her there was an initial two-hour hold on the money and afterwards she was free to draw against it, which she did over the course of several days by making two substantial withdrawals.

But after she totaled her car on May 24 and went to get another $5,000 to buy a new one so she could get to work, she was denied by a bank teller who questioned where she got the money.

"The guy behind the counter started asking me where did I get the money from, and a bunch of questions" she recalled. "And I told him, I feel that's none of his business, so I'm going to go to another branch where I feel more comfortable."

According to Anderson, she went to a different Bank of America branch to withdraw the money, only to be told that her account had been frozen for fraud, causing her to angrily accuse an employee of the bank of discrimination.

"'I feel like you guys are discriminating against me; is it because I'm black?' And then ... she told me to leave out the back because I was upset," Anderson claims she told the bank staffer. "Yes, I was [upset]. I was mad because these are my funds.  Why can't I receive my funds?"

Anderson said the bank has kept her in the dark and her funds unavailable since the confrontation, with the bank issuing a statement saying they are still investigating her situation.

"We've frozen the customer's account under the terms of our Deposit Agreement and Disclosures," the bank statement explained. "In the agreement, if at any time we believe a customers' account may be subject to irregular, unauthorized, fraudulent or illegal activity, we may, in our discretion, freeze the funds in the account and in other accounts they maintain with us, without any liability to the customer, until we are able to complete our investigation of the account and transactions."

According to a banking expert, the Patriot Act of 2001 gives bank employees leeway to place a hold on funds when they believe there is suspicious activity.

More than a week later, Anderson said that she has rent to pay and is still without a car to get to work, and took a shot at the bank for not only not releasing the funds, but claiming they told her it could be up to a year before the situation is resolved.

"I feel like my money is being held hostage. Every single dime is tied up in that bank,"Anderson said. "I thought I was being safe putting money in the bank, but it seems I'm safer putting it under my mattress."

Watch the video below via Fox 2 Detroit: