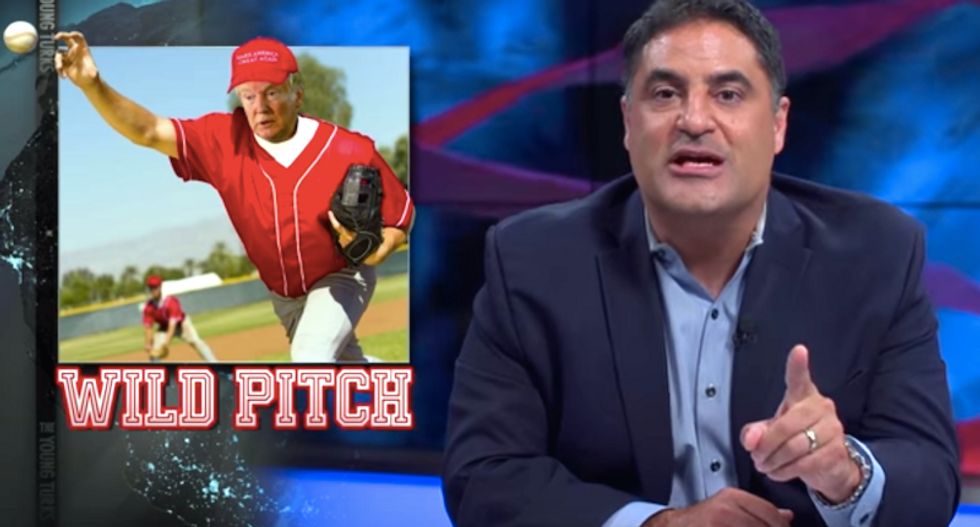 Donald Trump is trying to peel off disaffected Bernie Sanders supporters -- and the Young Turks' Cenk Uygur thinks he might fall ass-backwards into doing that.

Trump read a scripted -- and lie-strewn -- speech Wednesday morning attacking Hillary Clinton, who has out-raised and outmaneuvered him so far as the presidential race has narrowed to two presumptive nominees.

The GOP candidate claimed to be an independent reformer like Sanders, which Uygur said was crazy -- but possibly crazy enough to work.

“As crazy as it is, and he doesn’t agree with Bernie Sanders on anything, and he’s full of crap and he's not going to fix anything -- it is not that bad a political strategy,” Uygur said.

But he said Trump could still pick up voters who are fed up with money in politics because he had alienated the business community with his "insane" rhetoric.

"Corporate media has been pulverizing Donald Trump -- deservedly so," Uygur said. "But why? Because he's said, 'Maybe I'll bankrupt the country like I did in my personal life, and we won't pay our bill, and, hey -- maybe that'll be a good deal for us.'"

Outrageous statements like that might terrify Wall Street and corporate leaders, but Uygur said that might actually make some voters back him in spite of their disagreement with Trump on most every other issue.

Uygur said it might not even matter to some voters that Trump tried -- but failed -- to attract the same Wall Street donors as Clinton.

Trump slammed Clinton for taking campaign cash in return to political favors -- which Uygur said was a winning issue, even if the GOP candidate would do the same thing himself.

"You think Donald Trump wouldn't make a deal, take a lot of money and then give an ambassadorship?" Uygur said. "He'd do that deal in a second. He'd brag about that deal."

Trump, who had no real political experience before launching his White House bid, has made himself into even more of an outsider by antagonizing the GOP establishment and unsettling the business community.

That makes him appealing to voters -- including some Sanders supporters -- who want to smash the political system.

"Because of his failures in raising money, he might luck into the correct strategy," Uygur said.

Trump still needs to build a campaign apparatus, especially on the ground, to actually win the presidential race, Uygur said -- but he said Trump's lack of money could actually help more than it hurts.

"If he goes with this strategy, it's actually a better strategy than to go and raise money and be a typical political like he was planning to do," Uygur said.

Uygur admitted Trump, who he described as "fascist" and "un-American," would be a hard sell to Sanders supporters, who he said were "the most liberal people in the country," but he credited the GOP candidate for trying.

"Watch out, this buffoon might luck into a pretty good strategy," Uygur said. "Hillary Clinton, remember there are millions of Bernie Sanders supporters."

He warned Clinton not to take Sanders supporters for granted and hope that giving her onetime Democratic challenger a cabinet position would be enough to win over those voters.

Watch the entire video posted online by The Young Turks:

WATCH: Ron DeSantis squirms after being asked whether Trump is a good role model for kids

Political frenemies Ron DeSantis and Donald Trump are each vying to be the top Republican in Florida.

"For months, former President Donald J. Trump has been grumbling quietly to friends and visitors to his Palm Beach mansion about a rival Republican power center in another Florida mansion, some 400 miles to the north. Gov. Ron DeSantis, a man Mr. Trump believes he put on the map, has been acting far less like an acolyte and more like a future competitor, Mr. Trump complains," The New York Times reported Sunday.