Colbert: Clinton win like something seen in a ’sci-fi novel or any other country in the world’ 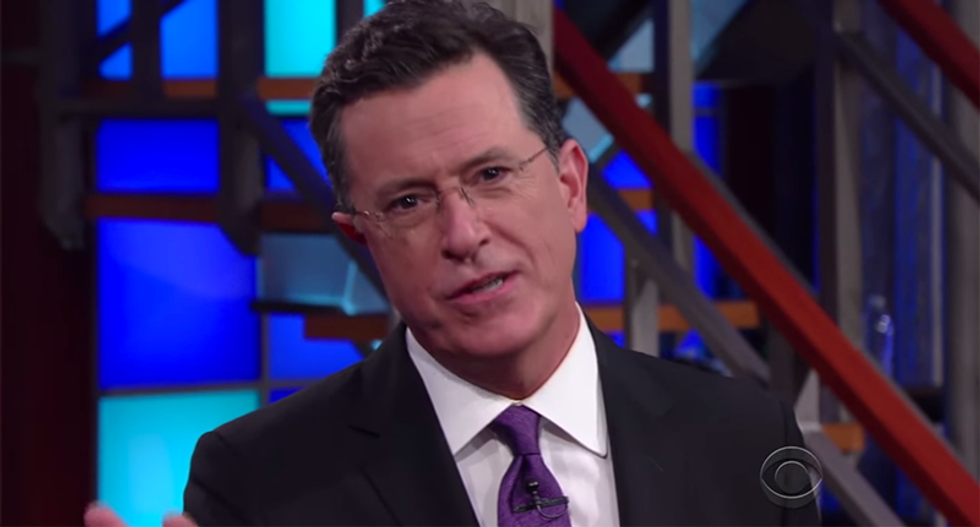 The Associated Press reported Hillary Clinton clinched the nomination Monday night, a day before primary elections were held in California, New Jersey, Montana and the Dakotas. It left many fans of Bernie Sanders complaining about disenfranchisement and the Clinton campaign furious that the media jumped the gun. That made it perfect for Stephen Colbert's truth bomb on the "Late Show" election night.

Colbert began highlighting the fact that Clinton is the first female nominee of a major political party. "It sends a powerful message to women that if you just work hard, someday you too can be vilified as an unlikable, machiavellian crone," Colbert said.

He also said that it's fitting Clinton is the first female nominee in the race against Donald Trump, because "he'll be his party's last nominee."

The way that the AP decided to call the election for Clinton was by calling superdelegates and getting hard commitments for who they say they're supporting. Once they got to the magic number, the AP announced Clinton would be the winner. "So, all you Bernie supporters who may be feeling disenfranchised, just calm down and remember the media and the superdelegates have been talking secretly and they decided it's over. They know best. Okay? But good job, you guys! Great job! That should calm them down."

The Clinton campaign anticipated announcing her victory after the election, "so when she does announce it, please, everyone, act like you didn't see this coming, okay?"

On the eve of the election, an audio recording was released by Wellesley of Clinton's commencement address she was voted to give by her fellow students in 1969. Despite being overwhelmingly supported in the vote to give the speech, "Bernie Sanders insists, 'This isn't over! I still have a path to giving that speech! I am building a time machine and I promise there will be a contested commencement!'" Colbert said in his best Sanders impression.

Colbert quoted Clinton's 1969 speech where she talked about the need for her fellow graduates to fight in politics to make the impossible possible. "And she has done it. She has made the impossible possible. She is a woman who has clinched the presidential nomination," Colbert began. "That is something you could only see in a sci-fi novel or any other country in the world."

Check out Colbert's full commentary below, complete with the 1970's photo of Burt Renolds naked in Cosmo: