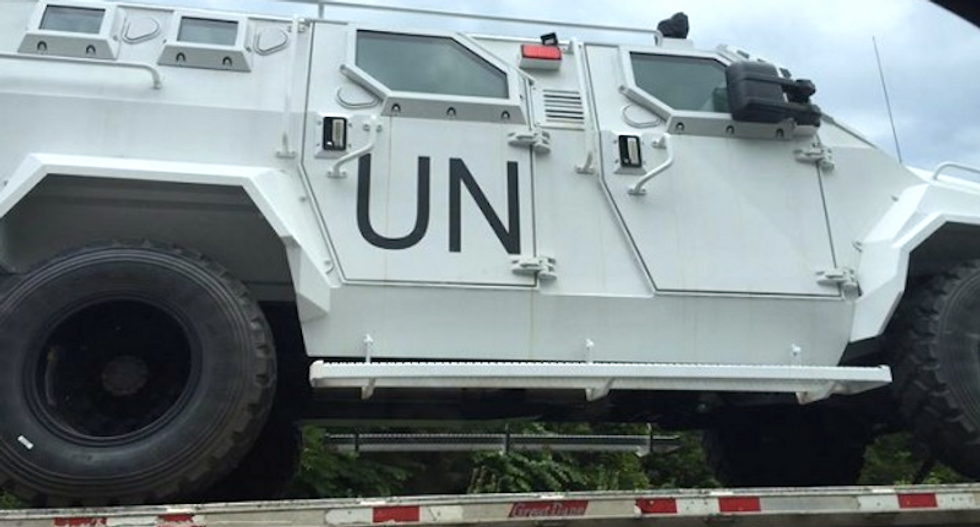 Conservatives -- including Sarah Palin -- are freaking out over reports of United Nations vehicles spotted on highways in Virginia and Kentucky.

A Facebook user posted photos Friday that showed the white armored trucks, which are equipped with off-road tires, and wondered why they were in the United States, reported the Daily Mail.

"Can't begin to tell you how many of these I passed today on 81 near Lexington VA," said the social media user, Jeff Stern. "Interesting times ahead!"

The photos and reports have been widely shared, sparking conspiracy theories about an imminent UN takeover -- similar to fears prompted last year by Jade Helm 15, a military training exercise that some worried would lead to martial law or even foreign invasion.

“Are these U.N. troops here preparing for economic collapse in America?" fretted a blogger at the Liberty Is Viral website. "Is this related to Iran ships approaching the U.S. border?”

Palin, the former half-term governor of Alaska and failed Republican vice presidential candidate, suggested the trucks might be part of a plot by President Barack Obama to disarm Americans.

World Net Daily passed along some of the same alarmist fears found on social media, but the website also acknowledged online speculation that the trucks were simply U.S.-made manufacturing products on their way to overseas markets.

Which is exactly what they are.

The rumor-debunking website Snopes contacted Alpine Armoring, the manufacturer named in the Daily Mail report, and found the vehicles were made by American workers for the UN to use abroad.

The UN trucks are then driven by flatbed trucks on the interstate to their final ports of call.

Similar sightings in October 2014 sparked fears of martial law or a UN takeover, which Snopes pointed out had not taken place.

The website was unable to verify that the trucks were spotted in Lexington, Kentucky, which is hundreds of miles from any seaports, and speculated that some commenters had confused the city with a Virginia city by the same name.