Eric Holder on Congressman Joe ‘You Lie’ Wilson: 'Somebody should have smacked his a**' 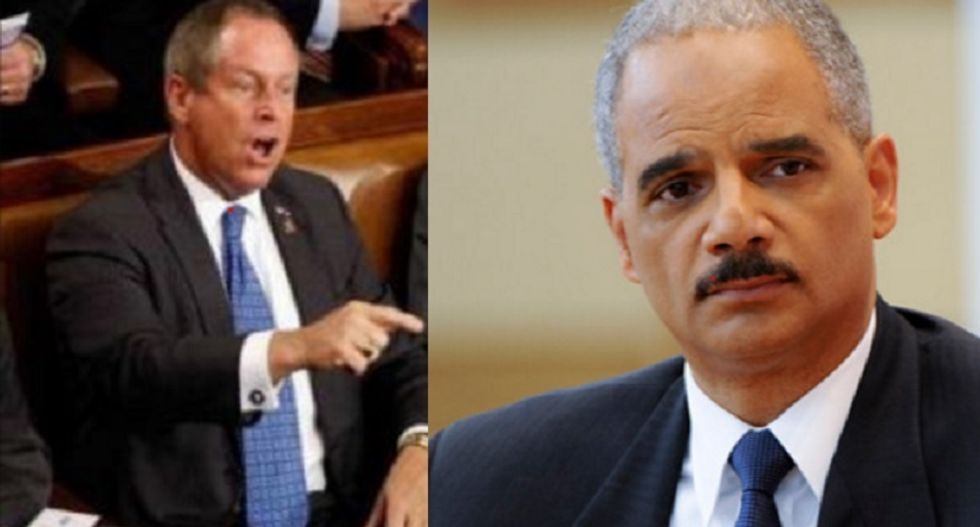 “Somebody should have smacked his a–,” Holder said of Wilson in an interview with The Undefeated. “They should have . . . told him to sit the f— down.”

In the interview, entitled, "A Question of Racism," Holder criticized Republicans for having a negative reaction to Obama based on his race.

“There is a unique feeling of fear — hatred is too strong a word — but a feeling of anger, dissatisfaction with this president,” Holder told the publication.

According to Politico, Wilson's outburst was a response to Obama's comments on his health care plan and promises it would not cover undocumented immigrants.

The Undefeated article covered the racist attacks on Obama during his two terms.

But the barbs come regularly, from national figures and local nobodies alike. Some have an unmistakably racial cast. For instance, Sarah Palin, the former Alaska governor and 2008 Republican nominee for vice president, used a Facebook post to demand that the president stop his “shuck and jive shtick” in explaining the terrorist siege of the U.S. diplomatic compound in Benghazi, Libya. The decidedly rotund Rep. James Sensenbrenner (R-Wisconsin), who has served in Congress for nearly four decades, sent a written apology to the White House after being outed for criticizing first lady Michelle Obama’s “Let’s Move” initiative by cracking, “Look at her big butt.”

...Beyond racial insults, there also have been instances of startling rudeness, such as when then-Arizona Gov. Jan Brewer wagged her finger at the president in view of the press corps as the two were embroiled in a heated discussion on an airport tarmac.

“I understand how government works and I know the deference traditionally given to the president that you do not see now,” G.K. Butterfield, a Democrat who chairs the Congressional Black Caucus told Undefeated. “You put all of these incidents together — questioning his citizenship, the Muslim stuff, the idea that he has been infected with anti-colonialist views by a father he barely knew — and you have a strong circumstantial case. It certainly smells like racism.”