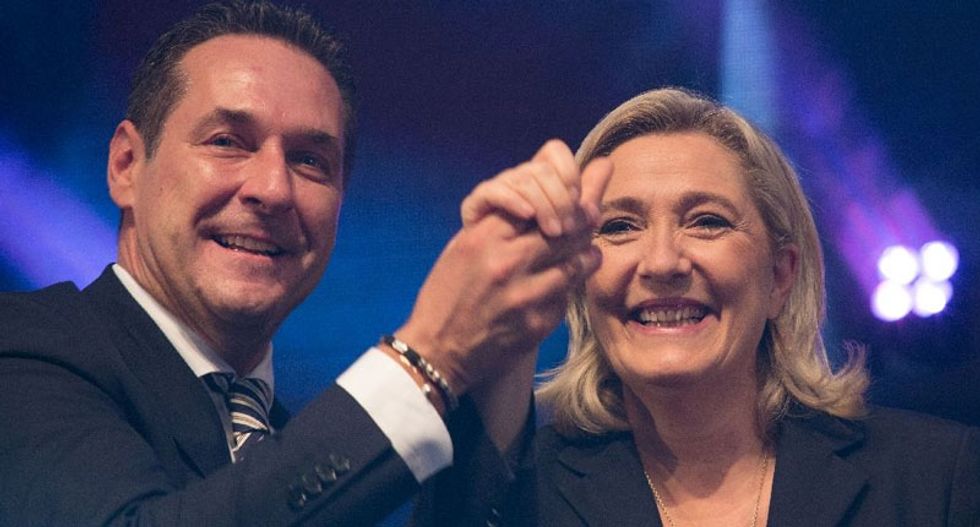 Eurosceptics were triumphant Friday after Britain voted to leave the EU and swiftly demanded referendums in their own countries, amid growing concerns Europe's hard-won unity may start to crumble away.

"Victory for Freedom! As I have been asking for years, we must now have the same referendum in France and EU countries," French far-right leader Marine Le Pen wrote on Twitter shortly after the results were announced.

Britons voted 52 percent to 48 percent to quit the bloc, a margin of more than one million votes, according to final results from Thursday's referendum.

In the Netherlands -- like France, one of the six founding members of the European community -- anti-Islam and anti-immigrant MP Geert Wilders also congratulated Britons on their "Independence Day."

"The Dutch people deserve a referendum as well. The Party for Freedom consequently demands a referendum on NExit, a Dutch EU exit," Wilders said in a statement.

Elections are not due to be held in the Netherlands until March 2017, but since last year polls have consistently shown support for his Freedom Party (PVV) climbing on the back of the migrant crisis.

Wilders vowed that if he becomes prime minister next year in any coalition government, "there will be a referendum in the Netherlands on leaving the European Union as well. Let the Dutch people decide."

In a separate Tweet using the hashtag #ByeByeEU, Wilders added: "Hooray for the Brits! Now it's our turn."

There are growing fears the British vote could trigger a domino effect, threatening the core of the European project.

"The EU is failing, the EU is dying, I hope that we've got the first brick out of the wall," said Britain's jubilant top anti-EU campaigner Nigel Farage, leader of the UK Independence Party.

As EU leaders gathered for crisis talks in Brussels, EU President Donald Tusk rushed to offer assurances that the bloc was "determined to keep our unity."

But Matteo Salvini, Italy's most prominent far-right politician, also hailed the Brexit vote as an example his country should follow.

"Cheers to the bravery of free citizens," the leader of the anti-immigration, anti-EU Northern League wrote on Twitter. "Heart, head and pride beat lies, threats and blackmail. THANKS UK, now it is our turn #Brexit".

The Netherlands, which currently holds the rotating presidency of the EU, held a referendum earlier this year on whether to back closer cooperation between the EU and Ukraine.

Turnout was low, but over 60 percent voted against the deal, in what was widely seen as a blow to the EU and a boost for eurosceptics.

There were similar reactions from other European eurosceptic parties:

-- In Denmark the populist Danish People's Party (DPP), which has been calling for a renegotiation of its accords with the EU, hailed what it called a "courageous" decision by the British. But it urged everyone to "keep their heads" and said it wanted to see what happened next.

-- Sweden's small Left Party called for the country's government to renegotiate the terms of its adhesion to the EU.

-- Heinz-Christian Strache, leader of the Freedom Party of Austria, demanded that European Commission chief Jean-Claude Juncker should resign "out of decency and out of respect for a better future for Europe".

-- The extreme left wing French presidential candidate Jean Luc Melenchon said the lesson to the EU was "either we change it or we leave".

-- And the leader of Germany's right-wing populist AfD Frauke Petry said in a Facebook post the Brexit was a warning that "if the EU does not abandon its quasi-socialist experiment of every greater integration then the European people will follow the Brits and take back their sovereignty."