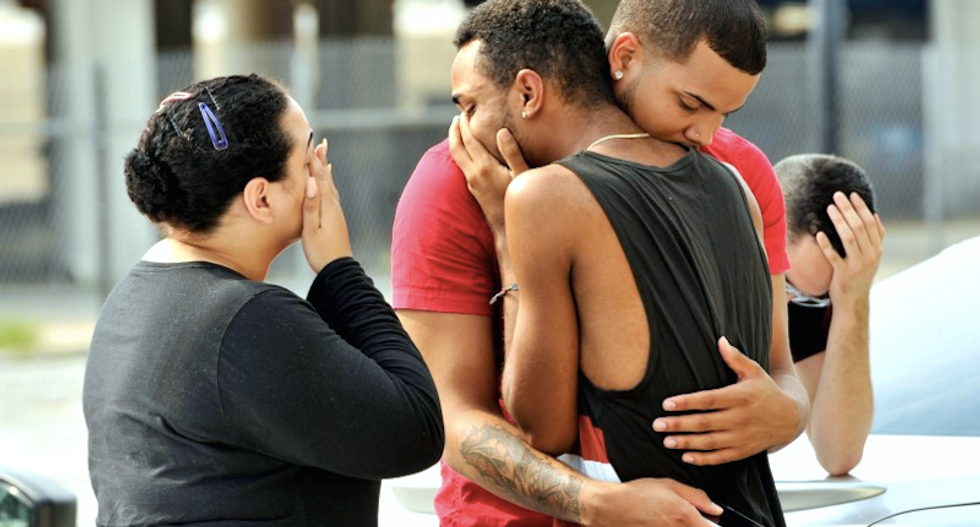 Friends and family members embrace outside the Orlando Police Headquarters during the investigation of a shooting at the Pulse night club, where as many as 20 people have been injured after a gunman opened fire, in Orlando, Florida, U.S June 12, 2016. (REUTERS/Steve Nesius)

Family and friends of victims trapped in a gay nightclub by a gunman pledging loyalty to Islamic State waited anxiously on Monday to find out whether their loved ones were among the 50 people killed and 53 wounded in the deadliest mass shooting in U.S. history.

The FBI and other law enforcement authorities were poring over evidence that could explain the motives for the rampage in Orlando, Florida, a massacre that President Barack Obama denounced as an act of terror and hate.

The gunman, Omar Mateen, a New York-born Florida resident and U.S. citizen who was the son of Afghan immigrants, was shot and killed by police who stormed the club with armored cars after a three-hour siege.

Mateen, 29, called emergency services during the shooting and pledged allegiance to the leader of the militant Islamic State group, officials said. His father said on Sunday his son was not radicalized, but indicated Mateen had strong anti-gay feelings. His ex-wife described him as mentally unstable and violent toward her.

Islamic State reiterated on Monday a claim of responsibility for the attack. "One of the Caliphate's soldiers in America carried out a security invasion where he was able to enter a crusader gathering at a nightclub for homosexuals in Orlando, Florida ... where he killed and injured more than a hundred of them before he was killed," the group said in a broadcast on its Albayan Radio

Although the group claimed responsibility, this did not necessarily mean it directed the attack: there was nothing in the claim indicating coordination between the gunman and Islamic State before the rampage.

The attack reignited the debate over how best to confront violent Islamist militancy, a top issue in the Nov. 8 presidential election campaign. Democratic candidate Hillary Clinton and her Republican rival Donald Trump were both expected to address the issue on Monday.

The shooting began just after 2 a.m. on Sunday at the crowded Pulse nightclub in the heart of Orlando, about 15 miles (25 km) northeast of the Walt Disney World Resort.

Some 350 patrons were attending a Latin music event at the club, a well-known gay nightspot in the city, and survivors described scenes of carnage and pandemonium as the shooter took hostages inside a bathroom.

Nearly 24 hours after the rampage ended, authorities had publicly named only 21 of the victims, half of whom were in their 20s.

Family and friends waited for news outside a center in Orlando where authorities were gathering details about people still missing.

Jaymie Glaspie, 35, was looking for her brother, Paul Henry.

"I've been calling all day, and I just went to his house," Glaspie said. "It's just ringing and ringing."

Maribel Mejia, 42, got good news about one friend, who sought cover during the shooting and escaped. Others were not as lucky.

Mateen was an armed guard at a gated retirement community, and had worked for the global security firm G4S for nine years. He had cleared two company background screenings, the latest in 2013, according to G4S..

Despite Mateen's 911 call expressing support for Islamic State, U.S. officials said on Sunday they had no conclusive evidence of any direct connection with foreign extremists.

"So far as we know at this time, his first direct contact was a pledge of bayat (loyalty) he made during the massacre," said a U.S. counterterrorism official. "This guy appears to have been pretty screwed up without any help from anybody."

Authorities said Mateen had been twice questioned by FBI agents in 2013 and 2014 after making comments to co-workers about supporting militant groups, but neither interview led to evidence of criminal activity

Ronald Hopper, the FBI's assistant special agent in charge on the case, said Mateen was questioned in 2014 about his contacts with Moner Mohammad Abu-Salha, a U.S. citizen who also had lived in Florida and became a suicide bomber in Syria that year.

Mateen's former wife, Sitora Yusufiy, said he was emotionally and mentally disturbed, yet aspired to be a police officer.

Yusufiy told reporters near Boulder, Colorado, that she had been beaten by Mateen during outbursts of temper in which he would "express hatred towards everything".

But his father Mir Siddique, who saw Mateen on Saturday afternoon, said he saw nothing out of the ordinary.

"Everything was normal," Siddique told ABC News, saying his son was not radicalized. "He was just a regular person who went to work, coming back and take care of his wife and his kids," he said. "If he was alive, I would ask him one question: why?"

In an interview with NBC news, the father described an incident in downtown Miami in which his son, saw two men kissing in front of his wife and child and became very angry.

Mateen and his family regularly attended a Florida mosque. "Not everyone had a friendship with him. He wasn't a people person. He was not extremely friendly but he wasn't rude either," said Mohammed Jameel, 54, a worshipper at the mosque.

Another worshipper said she recently saw Mateen dancing at his sister's wedding, a mixed affair that was open to both men and women.

The attack in Orlando came six months after a married couple in California - a U.S.-born son of Pakistani immigrants and a Pakistani-born woman he married in Saudi Arabia - killed 14 people in San Bernardino in an shooting rampage inspired by Islamic State. The couple died in a shootout with police hours after that attack.

Obama was due to be briefed at the White House by his top national security officials including FBI Director James Comey at 10:30 a.m. ET (1430 GMT)

He said on Sunday the Orlando gunman's motivation was still unclear. "We know enough to say this was an act of terror, an act of hate," he told reporters.

Condolences and messages of support poured in from around the world.

“Our hearts are heavy,” said German Chancellor Angela Merkel during a visit to China. “We are determined to continue living in an open and tolerant way even if such murderous attacks plunge us into deep mourning," Merkel said.

The shooting is expected to be a point of contention in the vitriolic U.S. presidential campaign. After the shooting, Obama postponed his first campaign appearance for Clinton, a Wisconsin rally that had been scheduled for Wednesday.

Trump, who has called for a temporary ban on Muslims entering the United States, said he was "right on radical Islamic terrorism" and called on Obama to resign because he did not say the words "radical Islam" in his statement responding to the shooting. He planned a speech on Monday about national security.

Clinton echoed Obama's comments calling the attack both an act of terror and a hate crime, adding that the massacre "reminds us once more that weapons of war have no place on our streets".

The most deadly attack on U.S. soil inspired by violent Islamist militancy was on Sept. 11, 2001, when al Qaeda-trained hijackers crashed jetliners into New York's World Trade Center, the Pentagon and a field in Pennsylvania, killing some 3,000 people.

At last weekend's Conservative Political Action Conference (CPAC), the Republican Party tried to rewrite history, in this case very recent history. Seven panels at the event were dedicated to the thoroughly-debunked assertion that Joe Biden is not a legitimate president, including "Other Culprits: Why Judges & Media Refused to Look at the Evidence" and "The Left Pulled the Strings, Covered It Up, and Even Admits It." Trump mined The Big Lie in his keynote speech, claiming that "this election was rigged," that the Democrats had "just lost the White House," that "I may even decide to beat them a third time" in the 2024 presidential race.

One thing Trump didn't address at CPAC was the insurrection he incited on January 6.