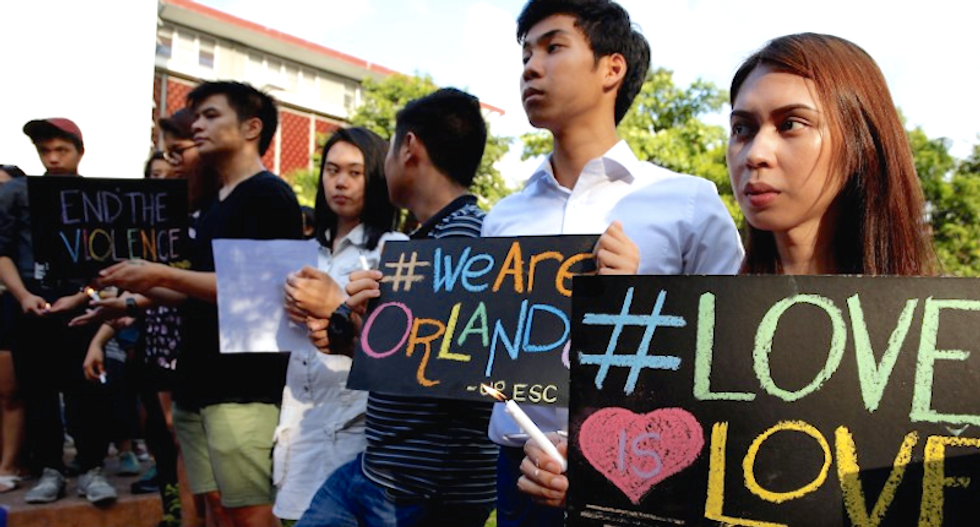 University of the Philippines students hold lit candles and placards as a tribute to those killed in the Pulse nightclub mass shooting in Orlando, during a protest at the school campus in Quezon city, Metro Manila, Philippines June 14, 2016. (REUTERS/Erik De Castro)

A federal grand jury has been convened to look into possible wrongdoing by the wife of the gunman who killed 49 people at an Orlando gay nightclub, and criminal charges could be brought against her early as Wednesday, a law enforcement source said.

Omar Mateen's wife, Noor Salman, knew of his plans for what became the deadliest mass shooting in modern U.S. history, said the law enforcement source who has been briefed on the matter.

"It appears she had some knowledge of what was going on," said U.S. Senator Angus King (I-ME), a member of the Senate Intelligence Committee, which received a briefing on the attack.

"She definitely is, I guess you would say, a person of interest right now and appears to be cooperating and can provide us with some important information," King told CNN.

Salman was with Mateen when he cased out possible targets for an attack in the past two months, including the Disney World resort in April, then a shopping complex called Disney Springs and the Pulse nightclub in early June, CNN and NBC reported.

Mateen, who was shot dead by police after a three-hour standoff at the Pulse club early on Sunday, called 911 during his shooting spree to profess allegiance to various militant Islamist groups.

Federal investigators have said he was likely self-radicalized and there was no evidence that he received any instructions or aid from outside groups such as Islamic State. Mateen, 29, was a U.S. citizen, born in New York of Afghan immigrant parents and worked as a security guard.

"He appears to have been an angry, disturbed, unstable young man who became radicalized," President Barack Obama told reporters.

Mateen was systematic during his rampage, working his way through the packed club shooting people who were already down. He apparently wanted to ensure they were dead, said Angel Colon, a wounded survivor.

"I look over and he shoots the girl next to me and I was just there laying down and thinking: 'I'm next, I'm dead,'" he said.

Mateen shot him twice more, one bullet apparently aimed for Colon's head striking his hand, and another hitting his hip, Colon said at Orlando Regional Medical Center, where he is one of 27 survivors being treated.

Vigils for the dead continued on Tuesday in Orlando. Hundreds of students gathered to pray and sing in the evening at the University of Central Florida. They shone cellphone flashlights during a reading of the names of the dead including two alumni.

Salman's mother, Ekbal Zahi Salman, lives in a middle-class neighborhood of the suburban town of Rodeo, California. A neighbor said Noor Salman only visited her mother once after she married Mateen.

Obama and Republican presidential candidate Donald Trump traded barbs in the aftermath of the shooting, which raised questions about how the U.S. should respond to violent extremists at home and abroad. The Federal Bureau of Investigation questioned Mateen in 2013 and 2014 for suspected ties to Islamist militants but was unable to verify that he posed a threat.

Obama slammed Trump for his proposed ban on Muslims entering the United States, joining fellow Democrat Hillary Clinton in portraying the Republican as unfit for the White House.

Trump criticized Obama for not using the term "radical Islamic terrorism" to describe Islamist militants. Obama replied that using that label would not accomplish anything.

Mateen made 911 calls from the club in which he pledged loyalty to the leader of Islamic State, Abu Bakr al-Baghdadi, whose organization controls parts of Iraq and Syria.

"We could hear him talking to 911 saying that the reason why he's doing this is because he wants America to stop bombing his country. From that conversation from 911 he pledges allegiance to ISIS," said Patience Carter, 20, who was trapped in a bathroom stall at the nightclub as Mateen prowled outside.

U.S. officials were investigating media reports that Mateen may have been gay but not openly so, and questioning whether that could have driven his attack, according to two people who have been briefed on the investigation and requested anonymity to discuss it.

The owner of the Pulse nightclub, speaking through a representative, denied reports that Mateen had been a regular patron.

"Untrue and totally ridiculous," Sara Brady, a spokeswoman for club owner Barbara Poma, said in an email when asked about the claim.

A former wife of Mateen, Sitora Yusufiy, said her ex-husband had facets of his life that he did not share with his family, such as drinking and going to night clubs.

"He did have a different side to him that he could not open up to his father about," Yusufiy told CNN. "It doesn't surprise me that he might be gay."

She has previously said he was mentally unstable and beat her and that she fled their home after four months of marriage.