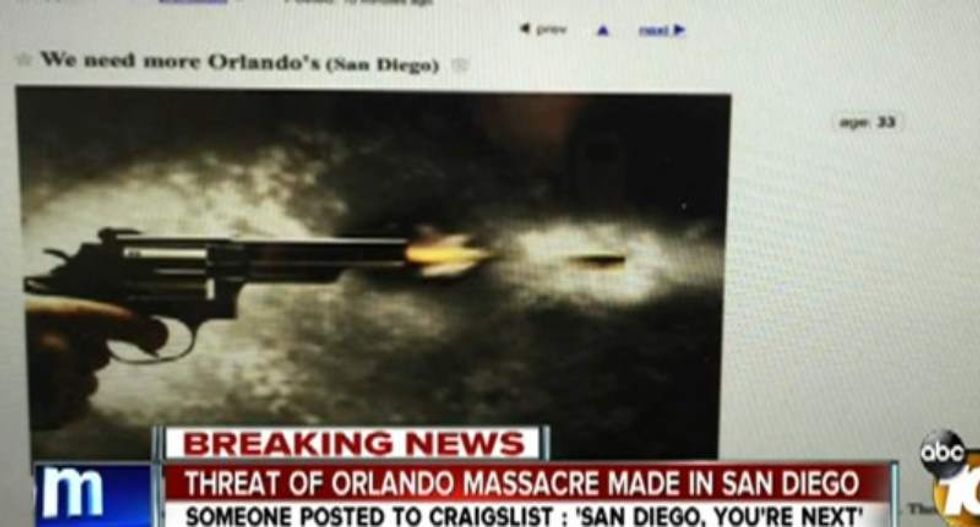 The FBI is investigating a threatening message posted on Craigslist in San Diego that referred to the shooting rampage at a gay nightclub in Orlando, Florida, officials said on Wednesday.

Darrell Foxworth, a spokesman for the Federal Bureau of Investigation's San Diego division, confirmed that the agency was looking into the post, but declined to provide further information when reached by phone.

Local broadcaster KGTV said San Diego police were also examining the message, which was posted in the men-seeking-men section of Craigslist in San Diego.

"Orlando was long overdue. Cleanse your community of the filth that gives decent gay men and women a bad name. Those people were walking diseases, bug chasers, and thank god for AIDS and 9-11 and now Orlando. San Diego you are next," the message read, according to KGTV.

A viewer took a screenshot of the message, which included a picture of a revolver being fired, and sent it to the news outlet before it was flagged and removed from the website, KGTV reported.

A San Diego police spokeswoman said the department was preparing a statement to provide to media.

A gunman opened fire at the Pulse club in Orlando on Sunday, killing 49 people and wounding dozens more in the worst mass shooting in modern U.S. history.

Investigators have questioned the wife of the gunman, the FBI said on Wednesday, and a law enforcement source said she could face criminal charges if there was evidence of any wrongdoing.

Watch a report on the ad, as aired on KGTV-TV, below.