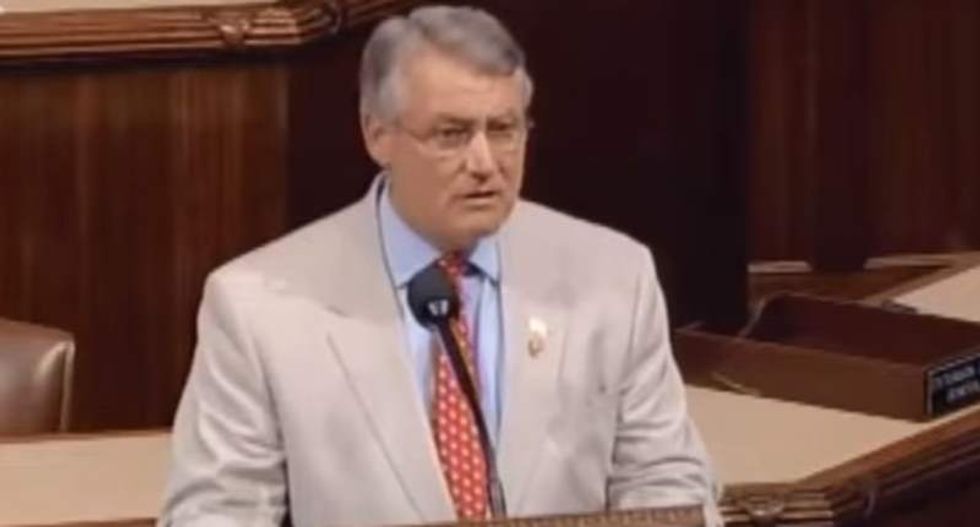 Last month, Republican Rep. Rick Allen (GA) drew some heavy criticism after he quoted a Bible verse condemning homosexuals as being "worthy of death" during a meeting with fellow lawmakers -- and he has no regrets, even after the mass shooting of a gay nightclub in Orlando.

In an interview with Roll Call, Allen said that he's praying for the families of people killed in the Orlando massacre, even though just weeks ago he justified his opposition to an amendment that barred discrimination against gay people by reading aloud a verse from the Bible that said gay people ought to be killed.

"Allen told CQ he does not feel a need to clarify his intention behind reading from Romans 1:18-32 and Revelations 22:18-19 during the May 26 Republican conference meeting," Roll Call writes. "Allen, asked whether he felt the need to make any clarifying statements about his reading of the verses in light of the Orlando tragedy, said, 'Well, I’m imperfect. And I consider that we are all imperfect and we all fall short of the glory of God, which is why we need a savior, by the way.'"

For the record, this is the text of the two Bible verses that Allen read aloud:

And likewise also the men, leaving the natural use of the woman, burned in their lust one toward another; men with men working that which is unseemly, and receiving in themselves that recompense of their error which was meet.

And even as they did not like to retain God in their knowledge, God gave them over to a reprobate mind, to do those things which are not convenient; Being filled with all unrighteousness, fornication, wickedness, covetousness, maliciousness; full of envy, murder, debate, deceit, malignity; whisperers, backbiters, haters of God, despiteful, proud, boasters, inventors of evil things, disobedient to parents, without understanding, covenant breakers, without natural affection, implacable, unmerciful: Who knowing the judgment of God, that they which commit such things are worthy of death, not only do the same, but have pleasure in them that do them.