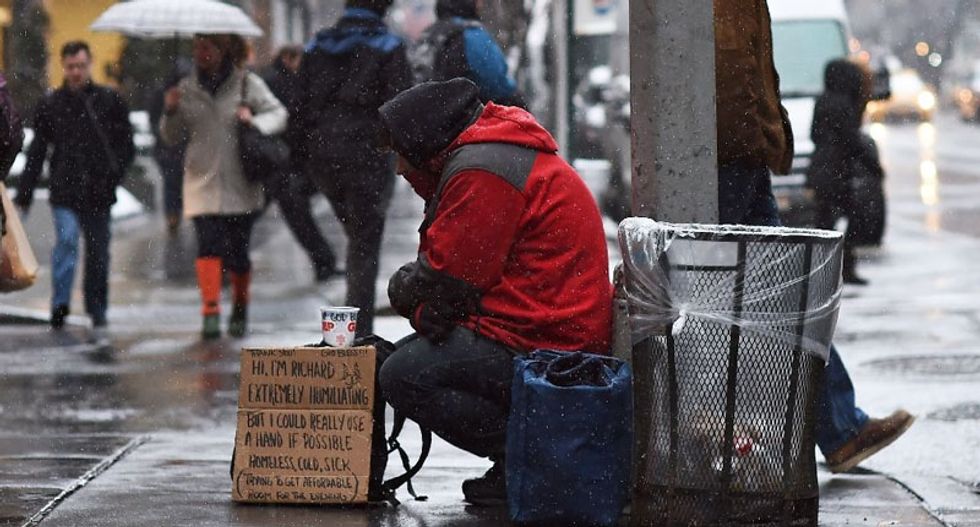 The International Monetary Fund warned the United States Wednesday over poverty and rising inequality in the country, saying both could hold back its economic potential.

The IMF cut its outlook for US economic growth this year to 2.2 percent, compared to 2.4 percent forecast at the beginning of the year. It cited the impact of slower global growth overall, the contraction in the energy industry due to low oil prices, and a slowdown in domestic consumer spending.

The Washington-based global crisis lender said the US economy is in "good shape" generally, growing more strongly than other leading advanced economies, with unemployment at a nearly nine year low and inflation in check.

The world's largest economy "has repeatedly demonstrated its resilience in the face of financial market volatility, a strengthening dollar, and subdued global demand," the report said.

Yet it identified stark trends that it said will slowly choke off avenues to future growth if not addressed soon, particularly a very high level of poverty for a rich country and increasing inequality.

The IMF said the ageing of the US population, with a surge of baby-boomers moving into retirement, is combining with a troubling stall in productivity gains and lack of investment in workers and physical capital to present a new challenge to the economy.

On top of that, it said the growth of inequality and persistence of high poverty would exacerbate those trends.

It noted that 46.7 million Americans -- one out of seven people -- are living in poverty, including 20 percent of all children. Working Americans' share of all income in the country has fallen by five percent in 15 years, and the middle class is the smallest it has been in three decades.

The polarization in income distribution, the Fund said, has effectively cut consumer demand by 3.5 percent since 1999 -- the equivalent of losing one year's consumer spending out of 15.

"Not only does poverty create significant social strains, it also eats into labor force participation, and undermines the ability to invest in education and improve health outcomes," she said in a statement.

"Our assessment is that, if left unchecked, these four forces -- participation, productivity, polarization, and poverty -- will corrode the underpinnings of growth (both potential and actual) and hold back gains in US living standards."

The IMF said that in order to reverse these trends, the United States must invest more in education and infrastructure, and must expand support for the poorest through taxation reforms, a higher minimum wage, and better social programs like childcare that will help the poor get and retain jobs.

The IMF also said that ratification of the Trans Pacific Partnership trade pact, which was signed last year between major Pacific Rim countries, would strengthen US growth prospects in the future.