Jan Brewer goes berserk on CNN: 'I'm fed up' with being treated like a 'bigot' for backing Trump 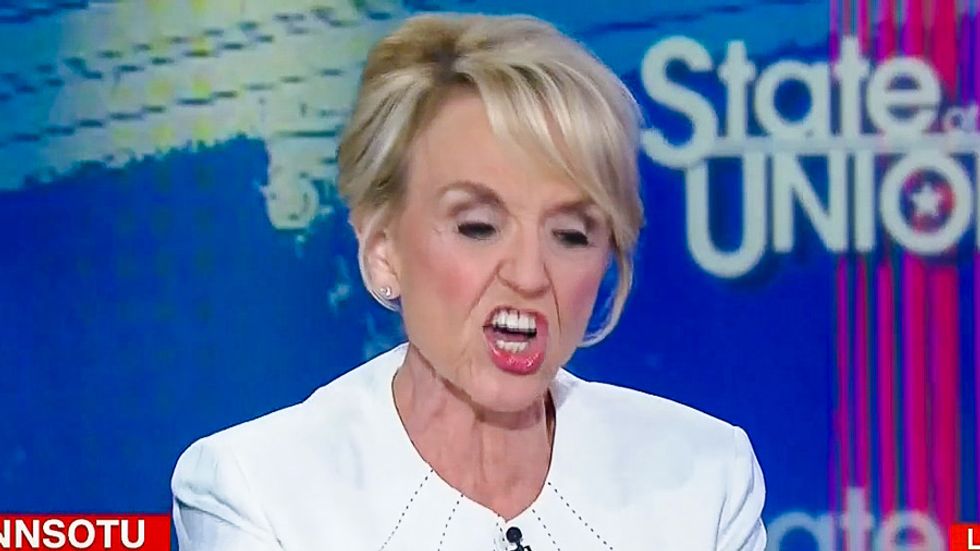 During an explosive CNN segment on Sunday, former Arizona Gov. Jan Brewer (R) lashed out at President Barack Obama because she said she was tired of being called a "bigot" for supporting presumptive Republican presidential nominee Donald Trump.

At a fundraiser for Gov. Jay Inslee (D-WA) on Friday, Obama took a shot at Trump.

The comments appeared to hit a nerve with Brewer when she was asked about them during a panel segment on CNN.

"Obama just always comes tearing after Republicans constantly, calling names and calling people bigots and racists," she complained. "And that's their big comeback, you know. And it's absolutely ridiculous. To see a president speak like that is offensive."

Former Maryland Gov. Martin O'Malley reminded Brewer that the president did not make his comments "about all Republicans."

"We need to discuss policy," Brewer shot back. "With President Obama and Hillary Clinton, every time you disagree with them, it doesn't matter which subject it is, you're a bigot or you're a racist!"

"No, that's not true," O'Malley replied.

CNN host Jake Tapper wondered if Brewer considered any of Trump's remarks "to be at the very least racially tinged or offensive on a racial level."

Brewer, however, gave Trump a pass because he was "new to the political area" when he said things she "wasn't comfortable with."

"But dang it," she exclaimed. "I get fed up that we hear over and over and over and over again from the president of the United States that every time somebody wants to support on the Constitution and the rule of law that we are out there because we are racist and bigots."

O'Malley noted that Trump had launched racial attacks on the Mexican heritage of a judge hearing the case against Trump University.

"Surely, Governor," O'Malley said, turning to Brewer, "you can't agree that is proper behavior for a man who's running for president."

"I don't believe Donald Trump meant it in the manner that he said it," Brewer remarked. "I believe that he felt that he was being treated unfairly."

"Because he hates Mexicans?" O'Malley asked.

"I can't believe you're supporting him," O'Malley laughed, throwing up his hands.

Watch the video below from CNN's State of the Union, broadcast June 26, 2016.