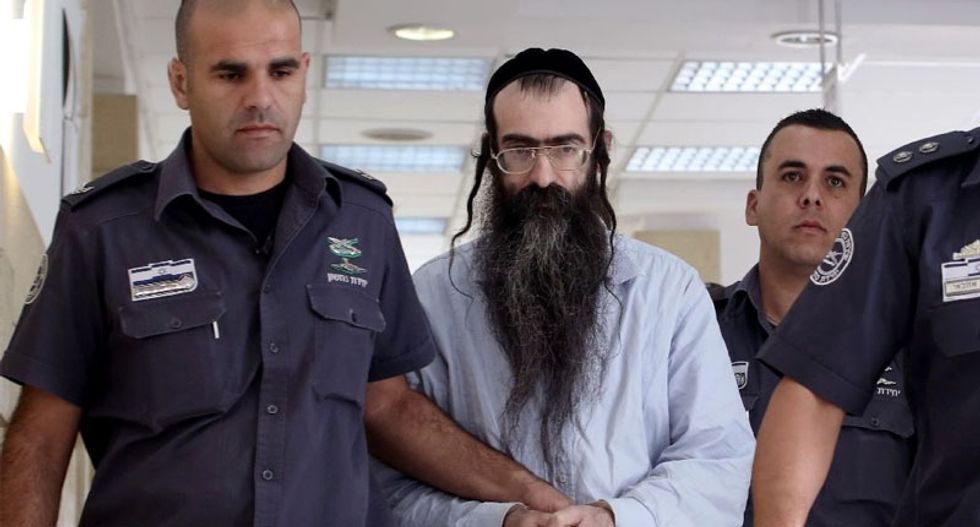 Ultra-Orthodox Jew Yishai Shlissel (C), who was convicted of killing a 16-year-old Israeli girl during the Jerusalem Gay Pride parade last year, is escorted into court by police on June 26, 2016 in Jerusalem (AFP Photo/Gali Tibbon)

An Israeli court on Sunday sentenced an ultra-Orthodox Jewish man to life in prison for killing a 16-year-old girl and wounding others during a stabbing spree at a Jerusalem Gay Pride parade.

The July 2015 stabbings had triggered harsh criticism of the police, with Schlissel having been released from prison only three weeks earlier after serving a 10-year sentence for a similar attack.

They had also sparked an outpouring of grief for 16-year-old Shira Banki, who was stabbed in the back and died of her wounds a few days later.

Led into the courtroom on Sunday with his hands and feet shackled, Schlissel was sentenced to life plus 31 years, a court statement said.

Prosecutors had requested life plus 60 years.

"This guy showed no remorse," Noam Eyal, 31 and one of the victims, told AFP outside the court.

"In the last hearing before this he said that this is a religious war."

In addition to Schlissel having been released from prison only weeks before, he had also posted a letter on the Internet speaking of the "abomination" of a Gay Pride parade being held in the Holy City.

He spoke of the need to stop it, even at the cost of one's life.

Many questioned how Schlissel, 40 when he was convicted, was allowed anywhere near the parade, which saw thousands marching through central Jerusalem.

Witnesses described terrifying scenes of Schlissel, with a long beard and dressed in the dark suit worn by ultra-Orthodox Jews, storming the parade with a knife.

Six senior Israeli policemen were eventually removed from their posts over the attack.

Schlissel, born in the Yad Binyamin community of central Israel, was married with four children, though he divorced after the first attack, Israeli media reported.

He had also lived in Modiin Illit, an ultra-Orthodox Jewish settlement in the occupied West Bank.

He attended religious school as a child and was described by one newspaper as being a gifted, but withdrawn student who preferred to keep to himself.

When he was charged in court in August, Schlissel lashed out at homosexuality.

"The pride parade must be stopped in order for the soul of Shira Banki to ascend to heaven," Schlissel told the court.

"With all the sorrow, it must be known that whoever marches in the Jerusalem Gay Pride march is declaring war on God. And whoever is warring against God, can't really complain," he told reporters during a remand hearing in August.

The annual Gay Pride parade in Jerusalem, a city sacred to Jews, Muslims and Christians, is far smaller than the one held in nearby Tel Aviv.

Tel Aviv's parade typically attracts tens of thousands of people to what is considered one of the world's most gay-friendly cities, while Jerusalem is far less welcoming to homosexuals.

Sarah Kala, executive director of Jerusalem Open House LGBT centre, said after the sentencing that "it's another step to try and deter the terrible homophobia raging on our streets.

"They don't usually give the maximum possible sentence, but in our view to know that Yishai Schlissel will stay in prison for the rest of his days is certainly something that comforts us a little," she told public radio.

During the trial, the court said police knew of the potential threat but failed to prevent it.

"The evidence clearly shows that Israeli police were aware of the dangers the defendant, released (from prison) a short while before the march, posed," the April judgement stated.

"The unbearable ease in which the defendant managed to infiltrate the marchers and carry out his nefarious deed before being apprehended is incomprehensible."

It said that "the gloomy picture arising is that lessons that should have been learned from the 2005 march were not implemented, and intelligence and other materials in possession of the police were not used prudently."

The court also noted the "absurdity" in Schlissel being released without any supervision or having undergone rehabilitation.