John Oliver uses Brexit as cautionary tale against electing Trump: ‘There are no f*cking do-overs’ 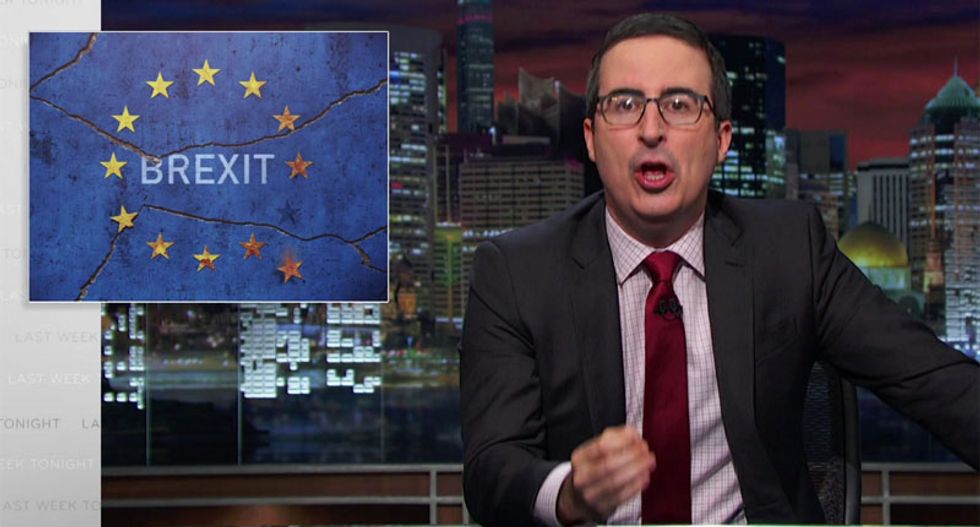 After using last week's episode of Last Week Tonight to urge British voters to reject Brexit, -- which will lead the U.K. to abandon the European Union -- host John Oliver looked at the disastrous passage and aftermath in an effort to school Americans about the consequences of a Trump presidency.

Noting the massive disruption to the British economy, Oliver took a step back to the evening of the referendum to show that many U.K. voters had no idea what they were voting on -- and had buyer's remorse the following day.

“Basically, it seems like whoever the next U.K. prime minister is going to be, whether it’s [former London mayor] Boris Johnson or a racist tea kettle, they are going to be in for a rough few years, because once they invoke what’s known as Article 50, they'll have just two years to negotiate their withdrawal and future relationship with the EU,” explained Oliver. “On top of which, they’ll have to settle outstanding bills with the EU, hammer out new trade bills with dozens of countries, sift through thousands of EU regulations and decide which ones to keep, and figure out how migration will work—and all the while, lives hang in the balance.”

Oliver hammered UK Independence Party leader Nigel Farage, and Johnson ("a shaved orangutan with Owen Wilson’s hair"), both of whom promoted the passage of the referendum with both also declaring its passage, "Independence day."

“First, Britain was already independent. In fact, it’s what many other countries celebrate their independence from,” Oliver said. “And second, the sequel to the movie they’re quoting [Independence Day: Resurgence] actually opened this week and features the wholesale destruction of London – which is beginning to feel pretty f*cking appropriate now.”

He then compared both British leaders to Donald Trump, noting their similarities for lying, bombast and nativism.

Pointing out that Trump lauded the Brexit vote by tweeting, "Many people are equating BREXIT, and what is going on in Great Britain, with what is happening in the U.S. People want their country back!” Oliver provided a more apt comparison.

“He found a way to make this whole thing about himself,” Oliver exclaimed. “You might think, ‘Well that is not going to happen to us in America. We’re not going to listen to some ridiculously haired buffoon, peddling lies and nativism in the hopes of riding a protest vote into power.’ Well let Britain tell you, it can happen, and when it does, there are no f*cking do-overs.”