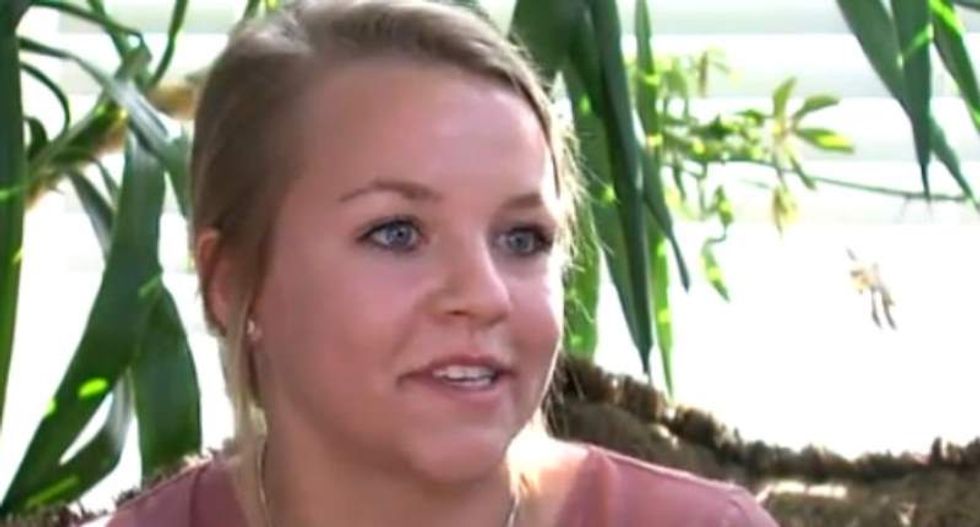 A 17-year-old girl in Kansas City, Kansas said she lost a job within an hour after asking to be paid as much as a male co-worker hired at the same time.

WDAF-TV reported that Jensen Walcott and her friend, 17-year-old Jake Reed, were hired on the same day at a local Pizza Studio franchise.

When Walcott shared the news with Reed, she said, she learned that he would be paid $8.25 an hour, while she was hired for $8 an hour for the same position even though both had the same amount of experience. She then called Legends and asked to speak to a manager about the discrepancy.

"I was like maybe when I'm on hold right now, she will just offer me 8.25 and everything is gonna be good," Walcott recalled. "She didn't do that."

Instead, she said, the manager fired both her and Reed for discussing their salaries, saying it was a violation of company policy.

However, both the National Labor Relations Board and President Barack Obama have ruled that employers are not allowed from preventing those types of conversations between workers.

A corporate spokesperson for Pizza Studio told WDAF that the incident "sounded strange."

Update, June 24, 3:45 p.m. EST: Pizza Studio sent The Raw Story a statement saying that after investigating the incident, the company determined that gender did not play a role in Walcott's firing.

"As a female and the highest ranking operations executive in the company, I oversee 750 employees, and have personally instituted policies and procedures that strictly prohibit discrimination of any kind," said Ashleigh Siefker, Pizza Studio's executive director of operations. "After an in-depth review, we are confident this instance was not one of gender-bias but rather a failure to assign the correct salary and a misunderstanding of our company policies by one of our employees; it should be noted the manager in communication with Miss Walcott is also a female."

However, Siefker said, the company "did not agree" with the manager's actions, and "parted ways with her" while also extending both an apology and an offer of employment to Walcott and Reed.

"We would like to thank Miss Walcott and Mr. Reed, the Kansas City community, and press for voicing their concerns and bringing this serious matter to our attention," the statement read.