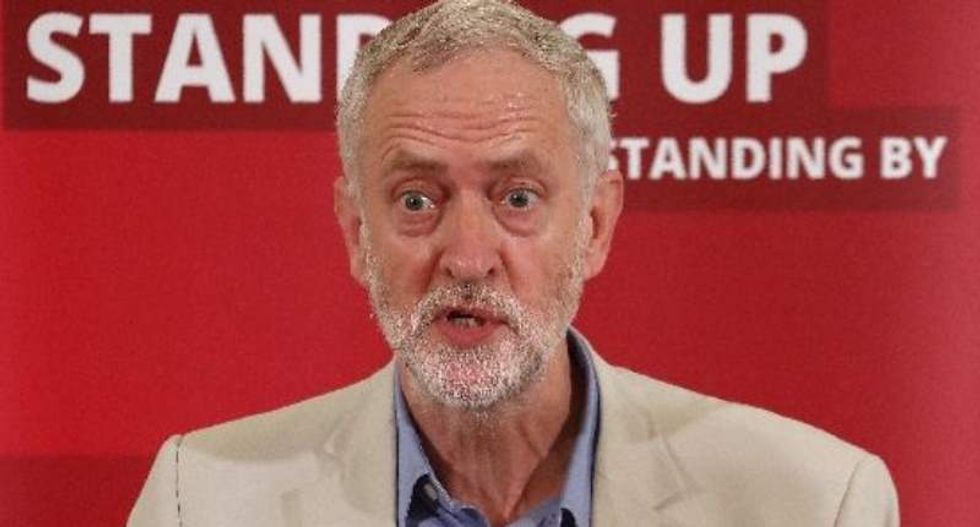 After a strong vote for a Brexit in Labour heartlands, party leader Jeremy Corbyn was fighting for his future Saturday amid accusations that he had lost the referendum by failing to rally working-class voters.

Two Labour lawmakers have tabled a vote of no confidence in the opposition leader, reflecting the anger felt by many MPs as the results of Britain's vote to leave the European Union began to sink in.

"It's your fault, Jeremy. When are you resigning?" shouted one party activist as Corbyn marked Gay Pride in London on Saturday.

"I did all I could," he replied, according to a video posted by the activist Tom Mauchline on Twitter.

More than a third (37 percent) of Labour voters defied their party leadership to back a Brexit in Thursday's historic referendum, helping cancel out strong support for the EU in London and in Scotland.

Nigel Farage, the leader of the anti-European, anti-immigration UK Independence party (UKIP), acknowledged the debt he owed them.

"The election was won in my view in the Midlands and the North and it was the old Labour vote that came to us and we, particularly as a party, campaigned as hard as we could in those areas," he told reporters.

Corbyn has dismissed the vote of no confidence, but the issue will likely dominate a meeting of the parliamentary Labour party on Monday.

Any challenger would need the support of 20 percent of the party's 229 MPs and would then be put to party members, who propelled the veteran socialist to power only last September.

Corbyn's left-wing views have enraged many moderates in the parliamentary party and his lukewarm support for the European Union may now prove the last straw.

"He came out too slowly, he was very half-hearted about his attempts to campaign and Labour voters simply didn't get the message," lawmaker Margaret Hodge, who tabled the vote of no confidence, told Sky News television.

Former minister Frank Field, who backed a Brexit, said that nobody thought Corbyn could win a general election.

"We clearly need somebody who the public think of as an alternative prime minister," he told BBC radio.

Another Labour MP, Graham Jones, said: "Vast swathes of white working-class voters, particularly north of the Trent, turned their backs on our message and our leader.

"I want a damn good explanation from Jeremy Corbyn as to why we ended up in this mess. If I am not satisfied, I will support the motion."

Peter Mandelson, a former EU commissioner and close ally of former prime minister Tony Blair, said it had become clear during the campaign that "Jeremy can't cut it".

In a sign of the tensions within Labour, MP Chris Bryant threatened to punch Ed Miliband, Corbyn's predecessor as leader, for leaving the party in such disarray.

In a speech in London on Saturday, Corbyn blamed the media for focusing during on the splits in Prime Minister David Cameron's Conservative Party in the referendum race.

But Robert Ford, professor of political science at the University of Manchester, warned that the campaign laid bare long-running problems in Labour areas.

Many voters have long felt abandoned by a political elite and left behind by economic and social change, he said.

"The depth and breadth of that feeling has taken a lot of us by surprise," Ford told AFP, adding: "That's a huge problem now for the Labour party to deal with."

He said that Corbyn and his pro-immigration, liberal, middle-class supporters were "on opposite sides of a yawning value divide" to many traditional Labour voters.

But he said that a stronger campaign could have swayed some voters, which may have been enough.

Corbyn's interventions were "the antithesis of leadership -- it was pathetic", he said.

"Corbyn probably is finished. I would be very surprised if this motion that has gone through didn't carry the day," he said.