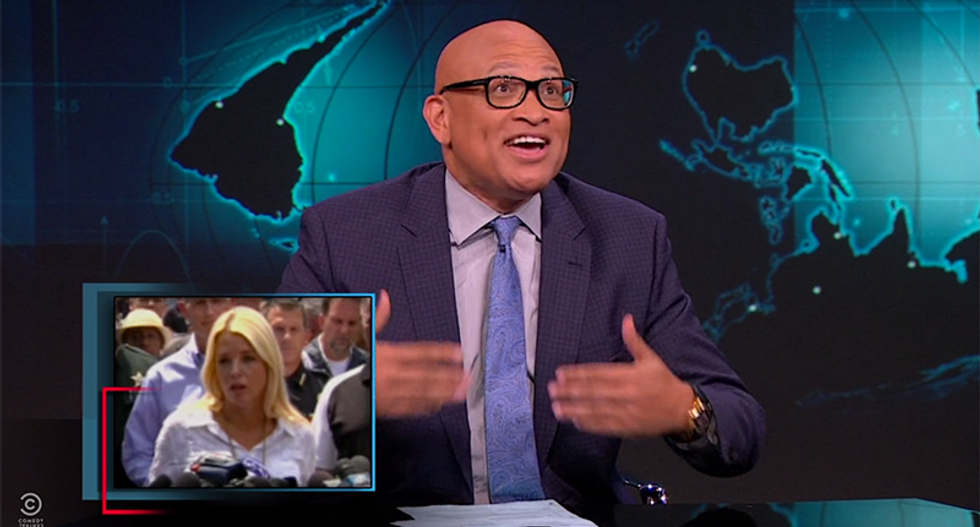 Pam Bondi is having a really bad week politically. After sparring with Anderson Cooper, "Nightly Show" host Larry Wilmore couldn't help but agree that she wasn't being entirely forthcoming about her new "support" for the LGBT community.

When Bondi tried to pretend like she always loved the LGBT community after the horrific massacre in Orlando, CNN's Anderson Cooper wasn't having it.

"The only time that much stuttering doesn't mean you're lying is when you're in a dance remix," Wilmore said about Bondi's struggle to say she didn't hate LGBT people.

Bondi was even caught in a lie about putting rainbow hands on her website, which she told Cooper she had done as her evidence she didn't hate gay people.

"So you just put that up now?" Cooper asked, perhaps wondering where this so-called "support" has been for the last several years Bondi has been in office.

Wilmore did an impression of Cooper asking, "oh, you just put that up now?" mocking Bondi thinking that was somehow some form of valid support.

"Absolutely, she will show respect for minority groups when there's a stock image available," Wilmore said. "Except, spoiler alert, there are no rainbow hands on Pam Bondi's site. She didn't even do the one political bullsh*t move she said she did! Here, Pam, let me help you out," Wilmore said before throwing up this image:

"It's been 24 hours since the interview, which apparently isn't enough time to find some rainbow hands," Wilmore said. "It should be enough time to set the record straight. Or, well, you know..."

Wilmore played a clip of Bondi's radio interview where she said there was a "time and place" for Cooper's inquisition and they should have been helping victims.

"Yeah, you could have been helping by clearing up your bullsh*t," Wilmore said to audience applause.

Wilmore said that Bondi doubled down on her non-apology, playing the clip where Bondi says that Cooper was trying to “encourage anger and hate.”

"No, no, no," Wilmore said, setting the record right. "The Florida gay community already hated you... For the whole, saying, 'gay marriage would cause public harm' thing and insinuating 'gay parents don't make stable homes,' thing. And, of course, the 'gay friends' excuse thing when asked about gay marriage," Wilmore said. He then showed an interview where a reporter asked Bondi if she was "personally against it" and she replied, "you know, I have so many gay friends."

"Jason at Starbucks is not your friend, okay?" Wilmore said. "And, he's straight. Stop judging guys with manbuns."

"I've had my issues with CNN in the past. I'm technically not allowed to appear on their network," Wilmore said, referencing when he and President Obama made fun of the network at the White House Correspondents Dinner and got him kicked off a scheduled Don Lemon interview by a vindictive producer. "But I have to give credit where credit is due. Anderson Cooper, for doing what we should be seeing on cable news all the time, I am giving you a half-stand full clap. Way to do your job, man!"

Cooper went another round with Bondi, last night on his show, which aired after Wilmore taped the "Nightly Show." He said that he felt the interview questions were valid because there are gay spouses that wouldn't be able to bury their loved ones if Bondi's office had her way.

Check out the full Wilmore clip below: