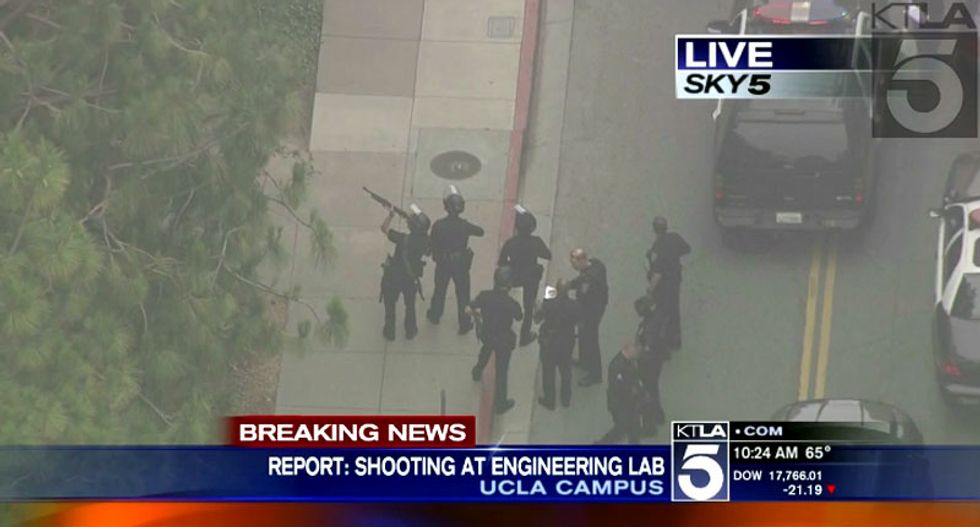 A murder-suicide killed two people at the University of California, Los Angeles on Wednesday, shutting down the campus for two hours as officers in camouflage and tactical gear responded to reports of a shooting.

"A homicide and a suicide occurred," Los Angeles Police Chief Charlie Beck told reporters near the scene, saying a gun was recovered at the scene.

"It appears to be entirely contained," he said. "There are no suspects outstanding and no continuing threat to UCLA's campus."

Both victims were males, officials said, without offering further details.

The shooting created a stir as police approached the scene fearing the shooter might still be active and university officials ordered the campus locked down.

At least three city blocks leading into the campus were filled with dozens of emergency vehicles. Officers in camouflage uniforms with rifles, bulletproof vests and helmets surrounded the area of the shooting.

An armored car was parked in the middle of one intersection, and helicopters clattered overhead.

Students and other bystanders stood calmly, taking pictures on their cell phones and watching the emergency workers.

Bioengineering student Bahjat Alirani said police were yelling at people to run from the scene.

"I was in Boelter Hall to take a final and I exit the staircase to see SWAT-looking police yelling at everyone to evacuate immediately," Alirani told Reuters.

UCLA, with more than 43,000 enrolled students, is in the Westwood section of Los Angeles and one of the more well-regarded schools in the University of California system, known for its successful sports program.

Erica Roberts, a sophomore economics major from Rockville, Maryland, said she took shelter inside the student health center about 10 minutes after she had arrived for work there.

"Everyone is really on edge and contacting loved ones to let them know we are safe," she said in a telephone interview. "I’m trying to stay in contact with all my friends on campus to make sure they are OK. Everyone is just terrified."

Watch a report on the incident, as aired on KTLA-TV, below.

A separate report from KABC-TV can be seen here.