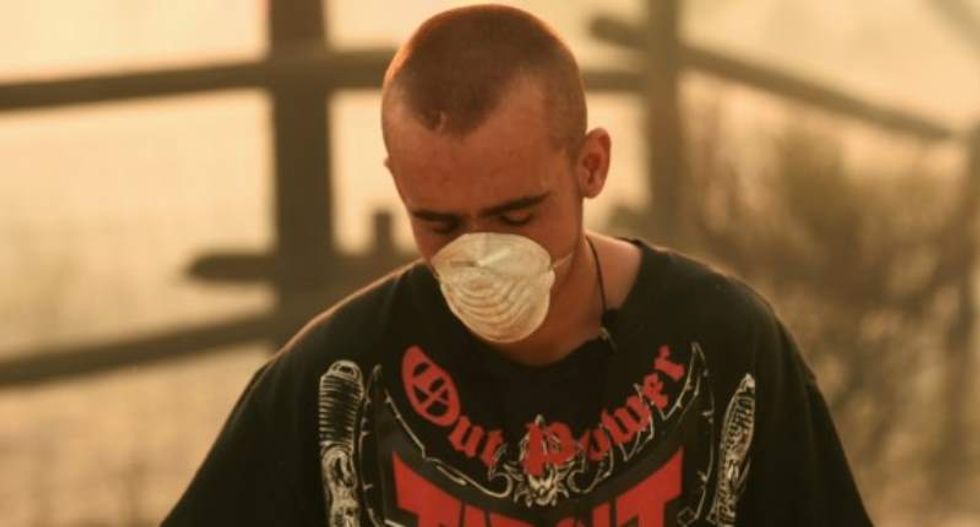 Alex Thurman, 20, stands in front of a smoldering field as the Erskine Fire burns near Weldon, California, on June 24, 2016. Thurman said he thinks the fire destroyed his neighboring home. (Reuters/Noah Berger)

A massive wildfire burning out of control in the foothills of central California has left at least 150 homes in ruins and damaged another 75, officials said on Saturday, warning that more residents may be forced to flee the advancing flames.

The so-called Erskine fire, which broke out on Thursday some 40 miles (64 km) northeast of Bakersfield in Kern County, has already claimed two lives, sent three firefighters to the hospital and forced thousands of people to evacuate their homes.

More than 1,100 firefighters have been deployed to battle the blaze, which has blackened some 35,700 acres and was zero percent contained as of Saturday afternoon. California Governor Jerry Brown has declared a state of emergency for Kern County.

"It is a vicious wildfire. We are going to be committed to this for some time," Captain Tyler Townsend of the Kern County Fire Department told CNN. "A lot of communities are still in danger."

Officials have not identified the two people killed in the huge conflagration, one of the worst in an already intense fire season in California. The Los Angeles Times reported that they were found together and died of smoke inhalation.

On Friday, authorities warned the more than 3,000 residents of the community of Lake Isabella on the shore of a reservoir to be prepared to evacuate.

Southeast of Lake Isabella, dozens of burned-out homes and car frames were left behind in a neighborhood reduced to a field of mangled metal and collapsed roofs.

To the south, firefighters were struggling to manage the so-called San Gabriel Complex fire in the foothills of Los Angeles County. There were two fires that started on Friday and cover a combined 5,285 acres (2,139 hectares), fire officials said. Containment was at nearly 50 percent for both blazes.