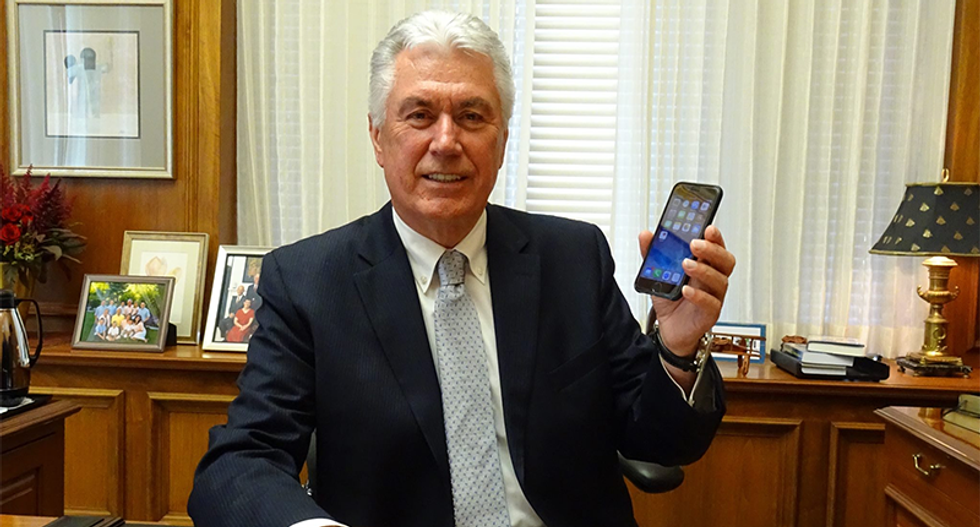 Founder of the Mormon church, Joseph Smith, used what he called a "seer stone" to derive mystical information and supernatural knowledge. When the angel Moroni showed Smith the golden plates, according to the story in the Book of Mormon, Smith was unable to read the gold plates because he didn't speak the "reformed Egyptian" language. Lucky for Smith, the "seer stones" he named "Urim and Thummim" magically enabled him to translate the 116-page book.

Mormon leader Dieter Uchtdorf serves as a “Second Counselor in the First Presidency” in the church, and while the story of Smith may seem farfetched, he says he can prove it is true, because a "seer stone" is basically the same thing as an iPhone.

"I can get the collected knowledge of the world through a few little inputs," Uchtdorf wrote as a description on a Facebook photo of him holding up his iPhone. "I can take a photo or a video with my phone and share it with family on the other side of our planet. I can even translate anything into or from many different languages!"

Uchtdorf believes that if he can do so many amazing things with his smartphone, which wasn't announced by Apple CEO Steve Jobs until 2007, then surely God gave Smith his own smartphone in 1823 to read the secret golden plates. "If it is possible for me to access the knowledge of the world through my phone, who can question that seer stones are impossible for God?" he asked.

Like many religions, the “seer stones” tell a story about a sacred object to their faith, much in the same way the Virgin Mary’s breast milk is said to have sprayed from a statue to St. Bernard’s mouth.

Unlike the "seer stones," however, Bloomberg reports that Apple spent $2.6 billion in research and development from the moment they began work on the iPhone until it was released. Most of the company's focus was spent on developing the iPhone.

No information is available on the cost or acquisition of Smith's "seer stones."