Morning Joe hammers GOP’s Tom Cole for his #NoFlyNoBuy excuses: If the watch list is bad — fix it 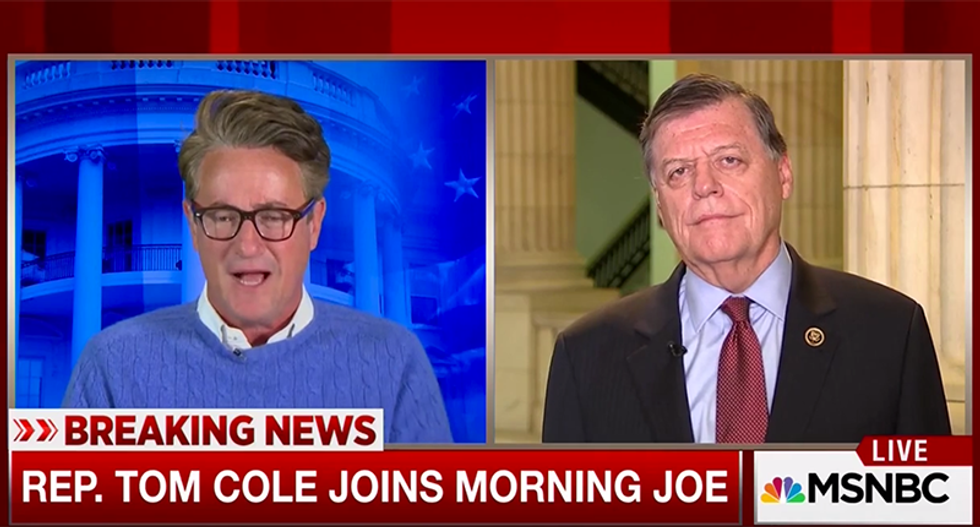 Rep. Tom Cole (R-OK) is not happy with Democrats who have taken over the House floor during the Fourth of July recess.

“Morning Joe” by asking Cole if he would support gun safety bills if they had measures to allow people requesting guns who are on the FBI’s terror watch list to get in front of a judge in 72 hours. She noted such legislation was what 85 percent of Americans want.

Surprisingly, Cole conceded "yes" if the problems with the no-fly list were fixed he would be open to the Democrats' #NoFlyNoBuy proposal. Ironically, that puts conservative Cole in allegiance with the ACLU on the issue.

Co-host Joe Scarborough got fired up. "Why don't we just get rid of the list if it's so bad? I don't understand. Why have the list at all? Cause I guarantee you, if someone commits a terror act that is on that list, you and everybody else is going to saying, 'Why wasn't the FBI on this guy?'"

Cole attempted to explain that there are so few people on the watch list, to begin with and many of them are foreigners who can't buy guns anyway.

"But you say the list is so awful, maybe we should just get rid of it," Scarborough said while Cole attempted to explain that the issue was complex. "No! It's not complex! You're saying that this is a terrible list! That it's strewn with errors, so just get rid of the list. This is the same argument that I hear on background checks. Look, we already have a background check system and it's so terribly flawed so we can't fix the background check system. I don't get it! Does the terror watch list serve a useful purpose or not?"

Cole conceded that it did. "So, doesn't it make sense that if it's served a useful purpose that you do your job as a legislator and senators do their jobs as legislators and make sure that it's an even better list so that we can make sure that people on that terror watch list can't go in and buy an AR-15 and mow down people in Oklahoma."

"Do you know anyone that did that?" was Cole's only answer.

Cole tried to fight back name dropping the Oklahoma City bombing, but Scarborough wasn't going to let it happen. "Yeah, I understand that. And why don't we try to prevent the next Oklahoma City instead of sitting back and acting like this doesn't actually make sense to try and stop people who are on a terror watch list from being able to walk into a gun store and get an AR-15. Doesn't that make sense to you?"

"Of course it makes sense if the list is correct," Cole said.

"Well, good! Let's vote!" Scarborough exclaimed. Cole tried to complain that the bill doesn't include watch list fixes in it. "We'll fix the list, Congressman. If you say the terror list makes sense, fix the list." Cole tried to blame the Obama administration for something that was unclear, but Scarborough jumped in again. "You fund the administration! You have oversight over the administration! You have the power to make sure that list is right, so that the people who are on that list, should be on that list."

Cole attempted to say that it would never work because the Obama administration would never cooperate with something like that.

Scarborough encouraged Cole to read the Constitution. "You've got the power of the purse!"

Cole got some flak from late-night host Stephen Colbert last night, as well, when Colbert criticized the Congressman's statements on the sit-in.

“I don’t think we should allow any group to bring the work of the House to a halt,” Cole said Wednesday in an interview.

“It’s true. It’s true. You wouldn’t want the gridlock to lose its momentum,” Colbert mocked. “Don’t let your complete paralysis get in the way of a good stalemate.”