NC trans people: H.B. 2 has made our lives a choice between being safe or breaking the law 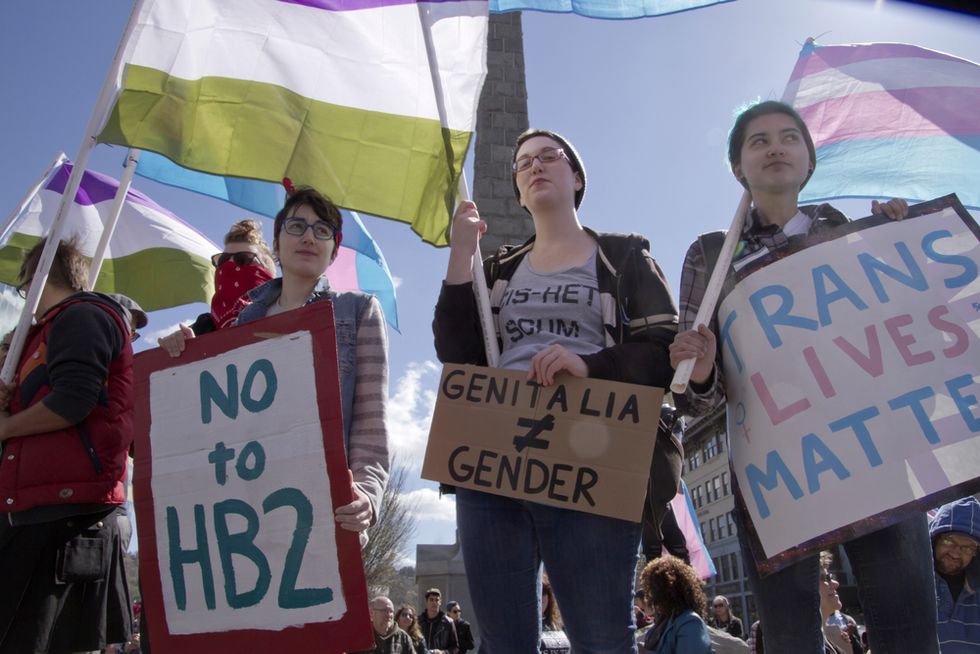 The passage of North Carolina's controversial "bathroom bill" House Bill 2 on March 23 has made the lives of many of the state's transgender population into a daily choice between breaking the law and keeping themselves safe.

The Los Angeles Times spoke to a number of transgender North Carolinians in an effort to gauge the effects of the law. The stories they heard were sobering, frightening and heartbreaking.

"I really try not to go to the bathroom at all,” said 20-year-old Peyton McGarry, a student at the University of North Carolina at Greensboro who has transitioned to living as a man. “When I was still in school for the semester, I literally had to walk two buildings down to legally use the restroom, and that’s the kind of situation transgender people are being put in all over the place now.”

Every time McGarry leaves the house, the Times said, he has to ask himself, "Have I drunk too much water today?”

"This is a situation where I’m choosing between safety or breaking the law, and I’m going to choose my safety every time,” he said. “So I go to the male restroom.”

State Republicans hastily wrote and passed H.B. 2 in a 12-hour session. The law criminalized using facilities other than those specified for the gender on one's birth certificate, but failed to set fines or specify the type of punishment lawbreakers should face.

August Branch, 25, of Greenville, said that when he teaches seminars at Eastern Carolina University, he is legally obligated to use the women's room, leading to some intensely awkward encounters.

“It makes everybody uncomfortable,” he said. “For me in general, it’s safer to use the men’s room...I’m, like, a 200-pound bearded guy. That’s the bathroom I should be using.”

Trans woman Angie Mullowny, 20, a student at North Carolina State University in Raleigh said she would rather break the law than take the risk of being attacked in a men's room.

"Every day I’m in dresses and tight clothing with a full face of makeup,” Mullowny said. “If I were to use the men’s room, I would be putting myself in physical harm, or putting myself in a situation where I could be sexually assaulted, and there’s no way I’m going to be doing that.”

Also under H.B. 2, no North Carolinian is allowed to sue at the state level alleging any form of discrimination. This means any person in the state with an employment or housing grievance must sue in federal court, which is more expensive and inconvenient for claimants.

North Carolina's Democratic Attorney General Roy Cooper has refused to defend the law in court, calling H.B. 2 "embarrassing" to the state and a clear violation of civil liberties.

Cooper is running against incumbent Tea Party Gov. Pat McCrory (R), who has said that he stands by H.B. 2 and accused Cooper of incompetence and dereliction of duty for undermining the law.

With Axios reporting that House Minority Leader Kevin McCarthy (R-CA) is walking a tightrope between pro-Trump House members and those who wish the former president would just go away, now Politico is adding some Republicans are rolling their eyes watching the GOP leader trying to stay on Trump's good side.

That has McCarthy's aides unhappy when they are trying to help the GOP leader get his caucus in line at a time when the Republican Party has lost both chambers of Congress and the White House.