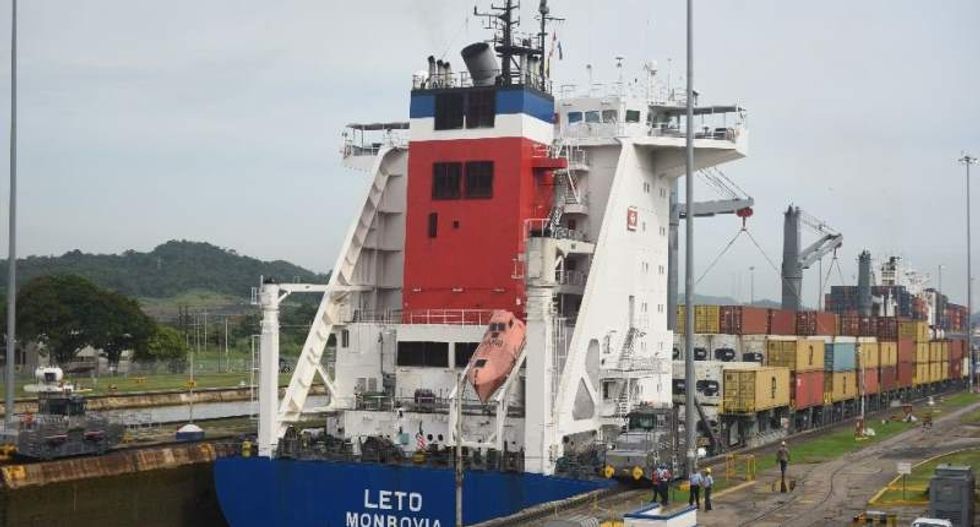 The Miraflores Locks of the Panama Canal on June 25, 2016. (Agence France-Presse/Johan Ordonez)

Panama is preparing to officially open its canal this weekend to far bigger cargo ships after nearly a decade of expansion work aimed at boosting transit revenues and global trade.

On Sunday, a VIP ceremony will be held on the banks of the canal to inaugurate the completion of the works.

President Juan Carlos Varela will unveil the new locks and third shipping lane built into the 102-year-old canal. Foreign dignitaries, including the presidents of Taiwan, Chile and other Central American nations, will be present at the ceremony.

A Chinese-owned Neopanamax-class cargo ship will be the first vessel to officially test the new infrastructure, entering from the Atlantic and exiting into the Pacific a few hours later.

The Neopanamax vessels are much bigger than the Panamax-class ships that previously were the largest able to pass through the 80-kilometer (50-mile) long canal. Each is able to haul three times as much cargo as the smaller predecessors.

The expansion work began in 2007 and was meant to have been completed in 2014, but it ran well past deadline, and over budget.

The expansion is estimated to have cost $5.5 billion. However, outstanding disputes between the Spanish- and Italian-led consortium that carried out the work and the Panamanian government could yet hike that figure by hundreds of millions more.

For Panama, the unveiling of the broader canal is a moment of pride and of opportunity.

Now, ships as long as the Eiffel Tower is tall, and as broad as Olympic-sized swimming pools, will be able to use the canal.

Annual cargo volumes should double over the next decade, leading Panama to hope to triple the $1 billion in shipping fees it receives each year.

Also, with the country these days linked to the "Panama Papers" scandal of offshore businesses owned by the world's wealthy and influential, the expanded canal is seen as a chance to burnish the country's tarnished image.

This will show the "real face of Panama," Panama Canal Authority (ACP) chief Jorge Quijano told AFP in an interview this week.

World trade should also benefit from what will essentially be an inter-oceanic highway for goods between the United States and Asia. More cargo on bigger ships should mean lower transport costs.

Panama is also avidly eyeing the lucrative market of transporting liquefied natural gas between the United States and Asia, principally to Japan.

The ships carrying the gas were too big to use the old canal. With the expansion, they now can.

"When we started this expansion, we did not have on our radar that the United States was going to be a net exporter of gas and oil," ACP deputy administrator Manuel Benitez Hawkins told journalists Saturday.

Now, with the US producing gas and oil from shale, American interest in using the canal has grown.

"That will add to the revenue and help us recoup" the massive investment, Benitez said.

Currently, some five percent of global maritime commercial traffic uses the canal, which provides a valuable shortcut between North America and Asia.