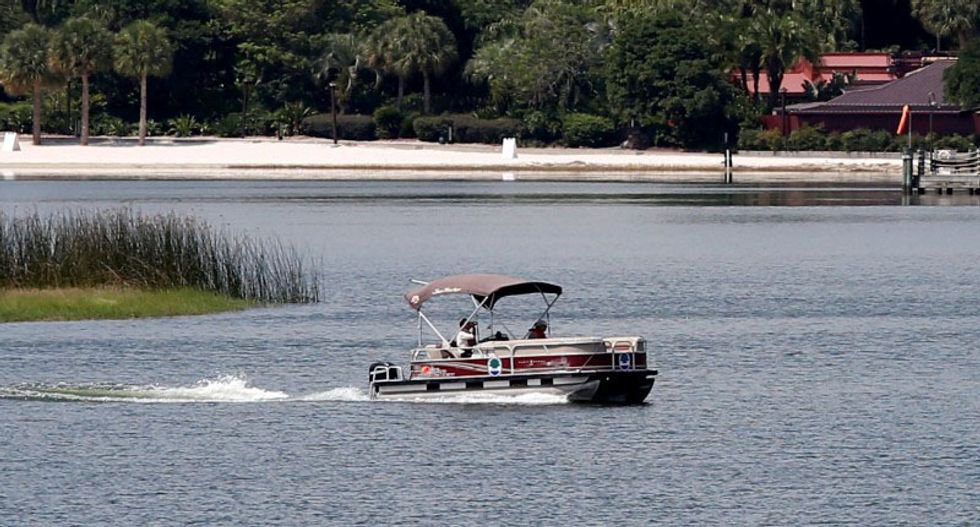 A search boat is seen in the Seven Seas Lagoon, in front of a beach at the Grand Floridian, at the Walt Disney World resort in Orlando, Florida, U.S., June 15, 2016. REUTERS/Adrees Latif

Authorities searched for the body of a 2-year-old boy on Wednesday after the toddler was dragged into a lagoon by an alligator in front of his family during a vacation at Walt Disney World resort in Florida.

The boy was snatched as he played at the water's edge on Tuesday night, despite his parents' effort to save him, by an alligator believed to be between 4 and 7 feet (1.2 and 2 meters) long.

Wildlife officials captured and euthanized five alligators from the lagoon to examine them for traces of the child but found no evidence they were involved, said Nick Wiley, head of the Florida Fish and Wildlife Conservation Commission.

The resort closed its beaches and recreational marinas on Wednesday as search teams worked the Seven Seas Lagoon, a man-made lake reaching 14 feet in depth.

Orange County Sheriff Jerry Demings, speaking at a news conference about 15 hours after the boy was taken, said, "We know that we are working on recovering the body of a child at this point.

"Our ultimate goal is to try to bring some closure to the family," he said.

The family, which was vacationing from Nebraska, was not named.

There are "no swimming" signs at the lagoon but the alligator grabbed the boy while his family relaxed nearby on the shore, authorities said.

The boy's father rushed into the water after the alligator struck and fought to wrestle his child from its grasp, Jeff Williamson, a spokesman for the sheriff's office, said earlier.

"The father did his best," he said. "He tried to rescue the child, however, to no avail."

The father suffered minor cuts on his arm in the struggle with the gator. Authorities said the boy's mother tried to rescue him too. A lifeguard who was on duty by the lagoon also was unable to reach the toddler in time.

"The gator swam away with the child," Williamson said.

Dozens of sheriff's deputies and wildlife officials were searching for the boy on Wednesday and expected to use sonar technology, helicopters and a team of divers.

Alligators are not uncommon in the Seven Seas Lagoon, Wiley said.

The wildlife commission works with the resort to remove "nuisance alligators" when they are reported, Wiley said.

Demings said Disney has operated in the area for 45 years and has never had this type of incident occur before.

"We know this is Florida and alligators are indigenous to this region," Demings said. "Disney has a wildlife management system that is in place and they have worked diligently to ensure that their guests are not unduly exposed to the wildlife here in this area."

Shares in the Walt Disney Company , which were up about 0.5 percent in afternoon trading at $98.86, did not appear to have been affected by the incident.

A spokeswoman for Walt Disney World Resort said everyone there was devastated by the tragic accident. "Our thoughts are with the family and we are helping the family," she said.

The upscale Grand Floridian Grand Resort and Spa is described by Disney as a lavish property combining Victorian elegance with modern sophistication, just one stop away from the Magic Kingdom on the resort's monorail. Rooms start at $569 per night, according to its site.

Guests can rent motorized boats for cruising or hire a private cabana on shore. Children between 4 and 12 years of age also can embark upon "pirate adventures" on the lagoon.

Despite the prevalence of alligators in fresh water around Florida, Wiley said it was very rare for humans to be attacked.

In May, a Florida man was hospitalized after an alligator bit off his hand and forearm as he sought to elude authorities by running into a lake, according to police.

The alligator incident comes as the Orlando area reels after a gunman killed 49 people at a gay nightclub there on Sunday before dying in a gun battle with police.

It also follows an incident on May 28 when a 3-year-old boy fell into a gorilla enclosure at the Cincinnati Zoo, causing zookeepers to kill a gorilla to protect the child.

Wednesday's incident was trending on social media where it reignited a spirited debate over responsible parenting, although some users expressed sympathy for the toddler's family.

"Dear Internet, can we please have a bit more compassion for a family who saw their son dragged away by an alligator?!! #DisneyGatorAttack," tweeted Jamie Lapeyrolerie (@jamielynne82).