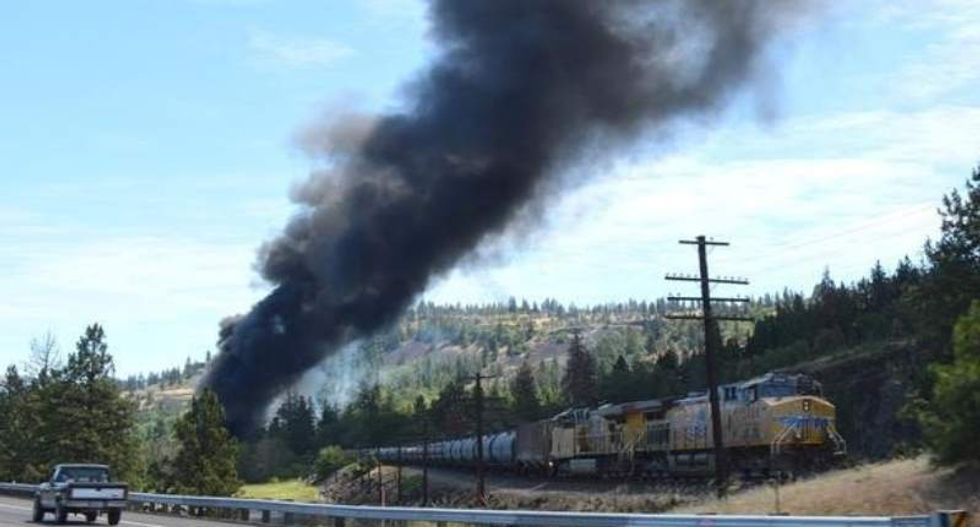 Smoke billows from a derailed oil train near Mosier, Oregon, U.S. in this handout photo released to Reuters on June 3, 2016. (Courtesy of Columbia Riverkeeper/Handout via Reuters)

Oregon has called for federal regulators to ban trains carrying oil in the state, ramping up pressure for more stringent safety checks weeks after an oil train derailed near Portland, the first major oil-by-rail accident in a year.

In a letter to the Federal Railroad Administration dated June 8, the Oregon Department of Transportation said preliminary findings of an investigation suggested inspectors might not be able to determine the cause.

In the accident, a Union Pacific train carrying crude oil derailed, burst into flames and spilled crude along Oregon's scenic Columbia River gorge. Nobody was injured.

A preliminary investigation suggested a failure with a bolt that fastened the rail to the railroad ties.

A spokesman for the FRA said the agency will respond to the letter.

Oregon is the first U.S. state to request such a move, although environmental lobbyists have called for years for a moratorium on oil trains after a series of explosive accidents.

Lac Megantic, in Canada's Quebec province, issued a moratorium on crude-by-rail in the town after a disastrous accident killed 47 people in 2013.

Washington State Governor Jay Inslee on Thursday renewed calls in a letter to the Transportation Secretary Anthony Foxx for the government to lower speed limits for oil trains, speed up the switch to newer tank cars and introduce electronic brakes.

Experts said it was unlikely federal authorities would enforce ban such as Oregon requested.

"The states could do it on their own. I don't know that the FRA necessarily would," said Tom Williamson, who owns Transportation Consultants.

"We move a lot of products in this country that are a lot more hazardous than crude oil."

Washington State does not believe it has the authority to call a moratorium on oil trains, a spokeswoman for Inslee said. The state passed a law last year requiring operators to notify first responders when a train was entering the state.

Oregon does not have any refineries, but its railroads carry crude from major U.S. producing hubs like North Dakota to feed refineries in Washington to the north. Five refineries with combined capacity 800,000 barrels per day operate there.

"If there’s a successful ban on crude-by-rail, it's going to be displaced, and we will get crude over the water," Marcia Nielsen, a spokeswoman for U.S. Oil & Refining Co, which operates a refinery in Tacoma, Washington.

Rail shipments have dipped from more than 1 million barrels per day in 2014 as a result of the lengthy slump in oil prices, but this month's crash reignited calls for tighter safety regulations even as train operators prepare for new laws, which come into effect in 2018.

"It is important to remember that hazardous materials are an essential part of providing for public safety and health, and for driving our economy," a spokeswoman for the company, which is owned by Berkshire Hathaway, said in a statement.

"Preventing these trains from getting to their destinations could have a negative impact on Washington’s ability to provide reliable fuel that drives the state's economy."

The company said it has also been developing predictive analytics to discover potential issues before they arise.

Justin Jacobs, a spokesman for Union Pacific, said the company would continue to transport crude oil safely and according to federal law.

"We absolutely understand the concerns out there. We take them very seriously. Safety is a top priority," he said.