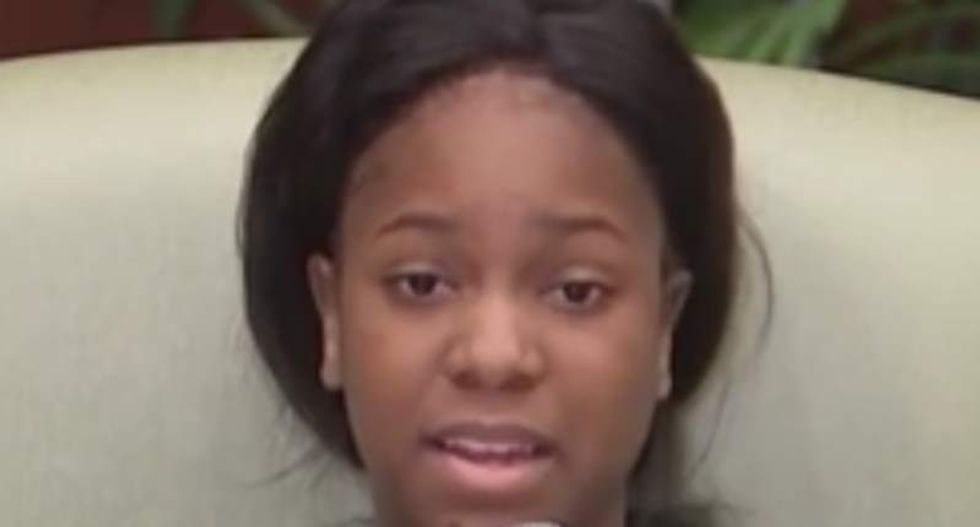 Patience Carter gives testimony about what happened inside Pulse nightclub in Orlando. (PBS)

A survivor of the massacre at Pulse nightclub in Orlando read a poem before she gave testimony to reporters about the horrific scene inside the club, where 49 people died and 50 more were injured.

PBS reported that 20-year-old Patience Carter was shot twice -- once in each leg -- by gunman Omar Mateen. On Tuesday, Carter told reporters gathered at Florida Hospital Orlando that before she described for them what happened inside the club, she wanted to read them something she'd written.

"Before I start to share my story, I want to recite a poem that I wrote in the middle of the night last night, which really shows everything that I'm feeling right now. And it's a part of my healing process: writing," she said.

The guilt of feeling grateful to be alive is heavy.

As the world mourns, the victims killed and viciously slain, I feel guilty about screaming about my legs in pain.

Because I could feel nothing like the other 49 who weren't so lucky to feel this pain of mine.

I never thought in a million years that this could happen.

I never thought in a million years that my eyes could witness something so tragic.

The guilt of feeling lucky to be alive is heavy. It's like the weight of the ocean's walls crushing uncontrolled by levies. It's like being drug through the grass with a shattered leg and thrown on the back of a Chevy. It's like being rushed to the hospital and told you're gonna make it when you laid beside individuals whose lives were brutally taken.

The guilt of being alive is heavy.

Carter and a friend were visiting Orlando from Philadelphia to kick off their summer vacation. Her friend Akyra Murray, 18, bled to death inside the club after being shot in the arm. Her full testimony is available here.

Watch Carter read her poem in the video embedded below: