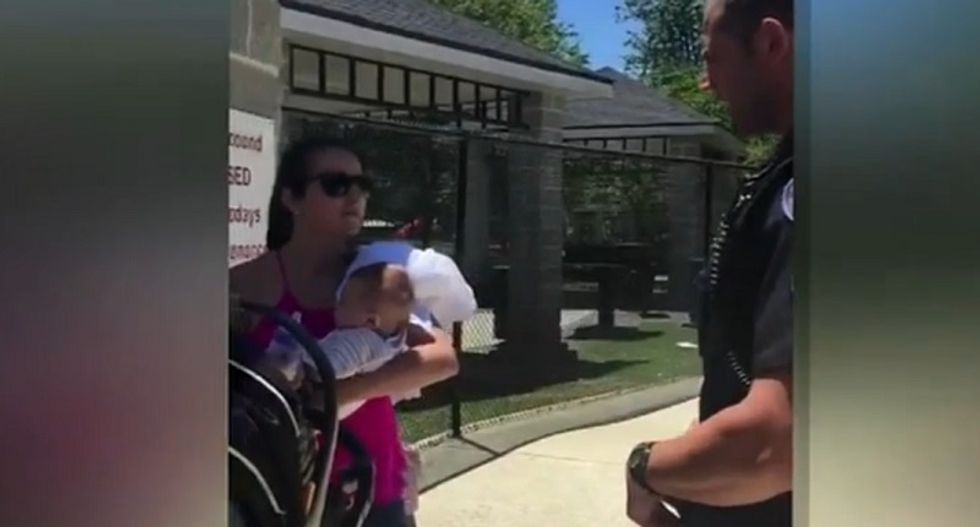 Summertime is upon us, and one thing parents are probably looking forward to is a trip to their local family-friendly water park.

But that kind of trip turned into a nightmare for a Georgia mother of two small children, who recounted being surrounded by park employees and even a uniformed police officer for the routine activities of changing and bottle feeding her infant, the Atlanta Journal-Constitution reports.

Andrea Sitaru said she took her children to Splash ‘n Play Sprayground at Riverside Park on Wednesday. The children became fussy and she readied the group to leave after three hours of play. She put her 3-month old son on a blanket and began changing his diaper. Seems simple enough.

But that resulted in Sitaru being surrounded by park employees and a cop and being escorted out. They informed her she was breaking park rules by feeding and changing the baby.

“I don’t want any other mom to go through what I went through,” she told local WSBTV.

In a Facebook post, Sitaru described the incident as "humiliating" and said one of the employees called her crazy.

She said she did not see a sign posted saying that parents can't change diapers on the deck where she was located, and said doing so was impractical anyway because the bathroom and changing table are dirty, wet and cold.

The "public restroom is beyond disgusting, 'stuff' all over their walls, wet floors and what they call a changing table is a dirty, wet & cold granite counter top next to a large trash can," she wrote. Sitaru added, "I've never seen such abuse of authority towards anyone in the past, nor such bullying towards a mother of an infant anywhere!!!"

"That is ridiculous. How can you have a place for children to play and expect there not to be moms feeding their infant??" one woman wrote.

The city acknowledged one of its employees erroneously told Sitaru feeding her baby was against the rules, AJC reports.

Watch the report, as posted by WSB, here:

A woman who didn't want to wear a face mask at her local grocery store decided to appease employees by taking off her underwear and putting it over her face.

South African news website Cape Town Etc. reports that the woman told security guards at the grocery store that she did not have a face mask when they asked her to wear one while shopping.