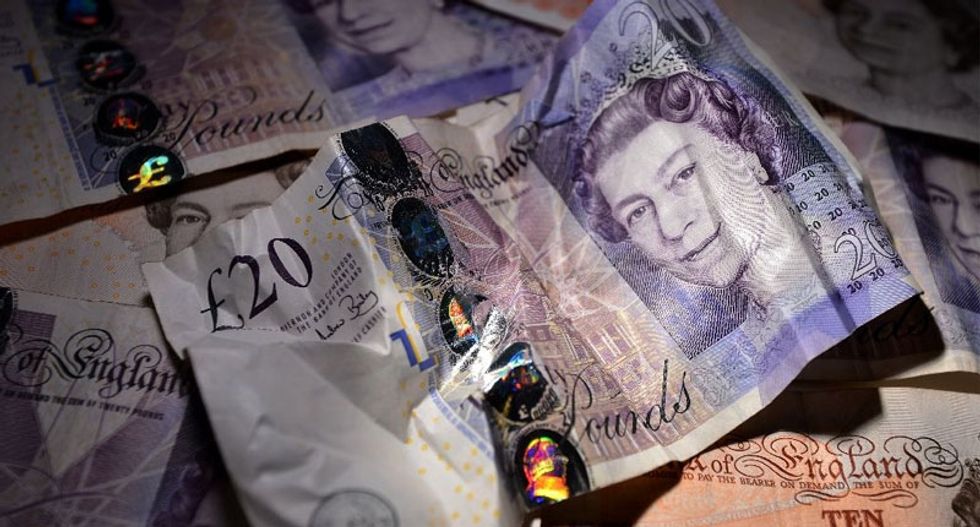 The pound plunged on the morning of June 24, 2016, as early results from Britain's knife-edge EU referendum gave surprisingly strong wins for those wanting to leave the bloc (AFP Photo/Ben Stansall)

The pound collapsed and world stock markets descended into pandemonium Friday after Britain's shock vote to leave the European Union, fuelling a wave of global uncertainty.

Sterling hit a 31-year low, crashing 10 percent to $1.3229 at one point, and the euro also plummeted against the US currency, as the Brexit result caught markets by surprise.

European stock markets went into free fall at the opening, mirroring a rout in Asian markets, after markets had banked on Britons opting to remain in the EU based on polls and bookmakers predictions.

London's benchmark FTSE-100 index plummeted 7.5 percent after opening but recovered some of the losses as the news sank in and British Prime Minister David Cameron announced his resignation.

Around midday it was nearly five percent down but the losses represented less than all the gains it had notched up in the week running up the historic result.

"Not surprisingly, this morning the referendum result has sent shock waves through global financial markets," he said in a note to clients.

Bigger losses were seen on the eurozone's main markets, Frankfurt and Paris, which both fell more than 10 percent at one point, as financial stocks took the biggest hit.

Both had slightly pared back losses by midday.

But investors were still clearly wrong-footed by the vote outcome.

European stock markets and the pound had gained steadily in the run-up to the referendum.

"It (Other OTC: ITGL - news) 's scary, and I've never seen anything like it," James Butterfill, head of research and investments at ETF Securities, said in London. "A lot of people were caught out, and many investors will lose a lot of money," he told Bloomberg News.

Fears are also growing that other EU members will push for referendums, posing the biggest threat to the future of the grouping since its inception almost 60 years ago.

That worry pushed stock markets in the eurozone's weaker southern economies even lower than their core counterparts, with Milan and Madrid stocks falling more than 10 percent, and Athens plunging more than 13 percent.

"Leave's victory has delivered one of the biggest market shocks of all time," said Joe Rundle, head of trading at ETX Capital.

The dollar slumped briefly to 99.02 yen, the first time it has gone below 100 yen since November 2013, before edging back up above 102 yen. The Japanese unit is considered a safe bet in times of uncertainty and turmoil.

The Bank of England said it would pump more than 250 billion pounds ($370 billion, 326 billion euros) into the financial system if needed.

The Swiss central bank said it had intervened in the foreign exchanges to stem the rise of the Swiss franc, which surged on safe-haven buying.

Investors also sought the relative safety of government bonds. The price on the German benchmark 10-year sovereign bond rose sharply, pushing its yield into negative territory for only the second time in its history.

But elsewhere, billions of dollars were wiped off investment portfolios.

India's rupee, the Canadian dollar and the Singapore dollar all suffered heavy losses, while the South African rand lost six percent on the day as emerging markets were hurt by sudden risk-aversion.

The prospect of a severe hit to the global economy also hammered oil prices.