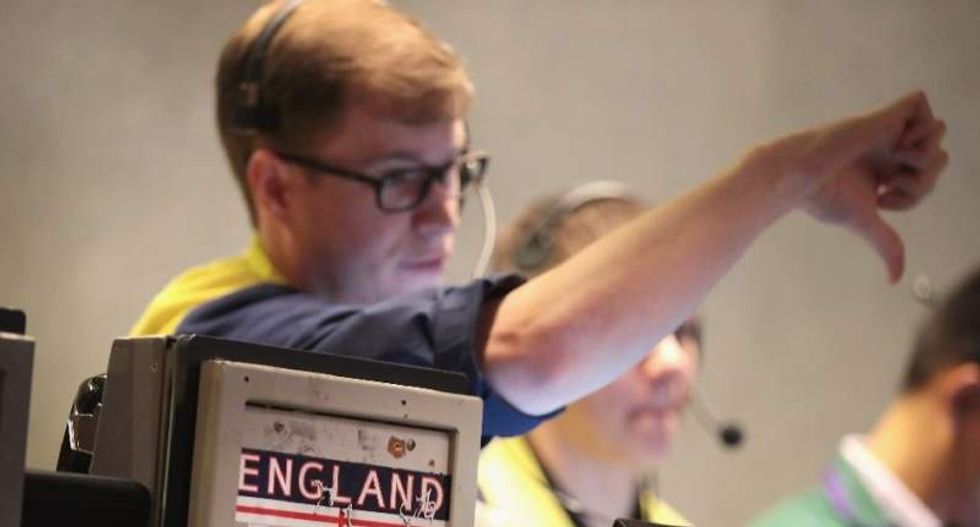 Traders in the Standard & Poor's 500 stock index options pit at the Chicago Board Options Exchange signal offers at the open of trading on June 23, 2016 in Chicago, Illinois. (Agence France-Presse/Scott Olson)

Two ratings agencies downgraded Britain on Monday because of its vote to leave the European Union, citing risks to its economy and political upheaval.

"In our opinion, this outcome is a seminal event, and will lead to a less predictable, stable, and effective policy framework in the UK," a statement from the agency read.

"The Brexit result could lead to a deterioration of the UK's economic performance, including its large financial services sector, which is a major contributor to employment," it said.

Fitch cut its credit rating by one notch from 'AA+' to 'AA', with a negative outlook. It lowered its economic growth forecast to 0.9 percent in 2017 and 2018 from 2 percent previously.

"Fitch believes that uncertainty following the referendum outcome will induce an abrupt slowdown in short-term GDP growth," its analysis wrote.

Both ratings agencies listed a possible second referendum on Scottish independence as a significant risk in the future.

Voters in Scotland backed staying in the EU but pro-Brexit sentiment in England carried the overall "Leave" vote, prompting a rise in support for independence according to polls.

The risks facing Britain are increased by the "political upheaval" that has followed the vote with the resignation of Prime Minister David Cameron and a leadership crisis in the opposition Labour party.

Divisions within the ruling Conservative party and a lack of clarity of Britain's future trade relationship with the EU increase the risks, according to both agencies.

A lack of clarity over what trading relationship the UK might have with the EU will also damage confidence, they noted.

"We believe that the lack of clarity on these key issues will hurt confidence, investment, GDP growth, and public finances in the UK, and put at risk important external financing sources vital to the financing of the UK's large current account deficits," S&P wrote.

Britain voted by 52 percent in favour of leaving the EU last week in a result that has hit European markets and sent the British pound tumbling to a three-decade low against the dollar.