Samantha Bee shreds Paul Ryan: Trump isn't what the GOP stands for -- 'he's what they bend over for' 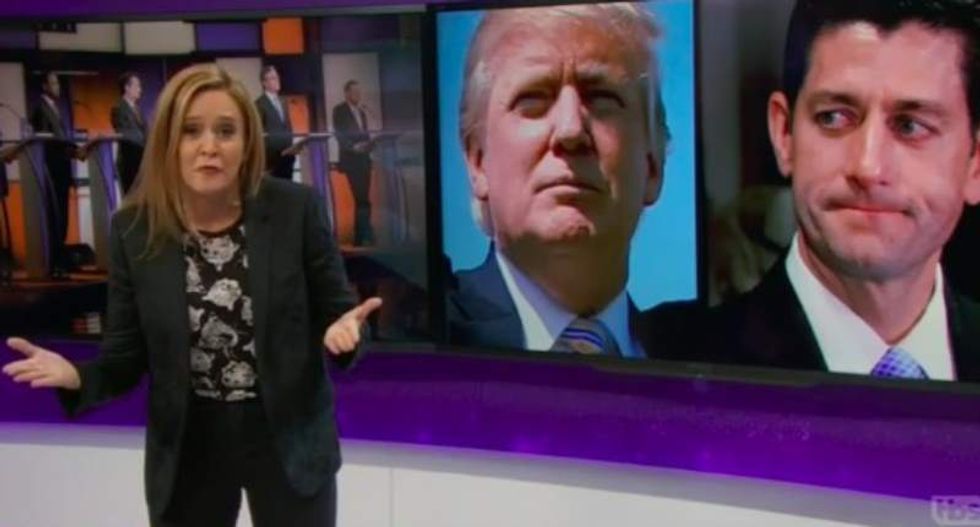 Samantha Bee celebrated the country's "Trumpiversary" by ripping both the Republicans and the media outlets who made Donald Trump's ascent to the party's presidential nomination possible, including House Speaker Paul Ryan (R-WI).

Bee pointed out that less than six months after saying Trump's rhetoric was "not what this party stands for," the congressman and former vice-presidential candidate endorsed the real estate mogul.

"He's right -- Trump isn't what Republicans stand for," she said. "He's what they bend over for."

But Trump would never have been in position to clinch the nomination, she argued, had he not been covered so heavily by cable news outlets, to the point where MSNBC showed an empty podium for an hour before one of his speeches instead of covering an actual policy speech by Democrat Hillary Clinton.

It did not help that when communities of color or Rep. Keith Ellison (D-MN) raised red flags about the appeal of Trump's anti-immigrant and anti-Muslim remarks to white conservatives, commentators like ABC News' George Stephanopoulos laughed them off -- in Ellison's case, literally.

"The only way that could happen is if people like you give [Trump] $3 billion in free advertising," she quipped.

Watch Bee's commentary, as posted by Uproxx on Monday, below.