Seth Meyers: Republicans might have to pay Trump to go away — but Mexico would help 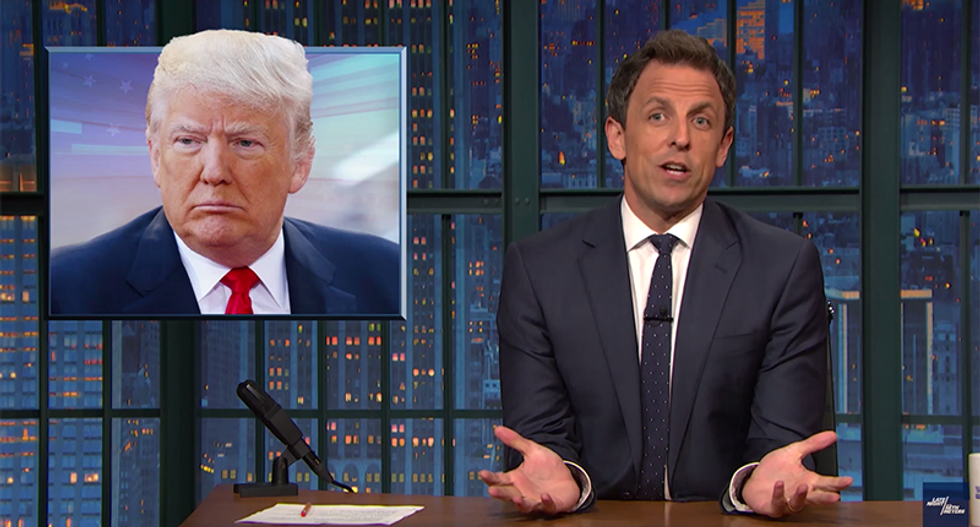 The last few weeks have been rough on Donald Trump's campaign for president, as prominent Republican elected officials have denounced statements from the party's presumptive nominee. The predicament they are in was perfect for late-night mockery from Seth Meyers.

Last week both Mitch McConnell and Paul Ryan refused to take questions about Trump's racist statements on the judge overseeing the Trump University case. In fact, they said that they're refusing to take questions on Trump on a daily basis. Meyers also cited Sen. John Cornyn (R-TX), who is so fed up with Trump he's refusing to talk about his party's nominee until after the election in November. "Wish me luck," he said.

"Yeah, good luck, buddy!" Meyers chided. "When I took this job, I thought I'd be making jokes about Republican nominee Jeb Bush. You did this to me!" Myers said, glaring at a photo of Bush beside him.

Other candidates have taken to running and hiding in the members-only elevator in House and Senate office buildings. When Sen. Pat Toomey (R-PA) was asked about Trump's renewed plan to ban on Muslim immigrants, he ran into the elevator claiming he didn't watch Trump's speech that closely. Sen. Richar Burr (R-NC) claimed he didn't see the speech at all, as he too ducked into an elevator.

"It's only a matter of time before Capitol Hill elevators are jammed with congressional Republicans hiding out until after the election," Meyers shamed. "'What floor?' 'Oh, no floor. I'm just going up and down until Nov. 9.' I guess it's only appropriate that a campaign that began on an escalator ends huddled in an elevator."

Even Republicans who were once gung-ho on the Trump train are now toning down their support. Sen. Ron Johnson (R-WI) is in a tight reelection bid against former Sen. Russ Feingold, and on Sunday tried to say he was supporting the GOP nominee without actually endorsing Trump. An endorsement, Johnson explained, "is a big embrace," and that is how it differs from simply "supporting" a candidate for president.

"That's right, an endorsement is a big embrace. Just like Chris Christie endorsed his Donald Trump pillow every night before he goes to bed," Meyers mocked with a frightening photo.

Behind closed doors, things aren't much better. Former presidential candidate Mitt Romney held a retreat for GOP leaders, which was described by CNN commentator Ana Navarro as a "Thanksgiving dinner with the most dysfunctional family. You know, you thought you were gonna get stabbed with a fork!"

Even Trump's friend, Russian president Vladimir Putin, distanced himself from Trump over the weekend. While Putin has called Trump "brilliant" and "talented" in the past, this weekend he walked those statements back, claiming he meant "colorful."

"You know it's bad when Vladimir Putin doesn't want you damaging his brand," Meyers mocked. "And in fairness, I gotta say, Putin needs to be safe with his brand because he's making good cash with his Putin Steaks," he said, showing a doctored graphic of Trump Steaks.

Meyers posed the question: So what's a Republican to do? "What brilliant Republican statesman will snatch these hapless senators away from the grip of 'Toxic' Don and whisk them away to electoral success?" He then showed a clip of a news report that George W. Bush is coming out of retirement to raise money for Republican senators.

"That's right, they're calling in George W. Bush to come in and clean up Trump's mess," Meyers remarked. "That's like calling in Justin Bieber to cover a Pitbull song."

Other Republicans devised a strategy to offer Trump $150 million to drop out, saying that he likely would take it. When a former Trump advisor was asked if that was likely they said, "Yeah, probably."

"I'm guessing 'yeah, probably' is the go-to for many former Trump advisors. Would he nuke North Korea if Kim Jong-Un made fun of his tiny hands? 'Yeah, probably," Meyers assumed.

When Trump talked about the allegations he would sell his campaign, he gave a hard no on $150 million but he'll think about it for $5 billion. "Now everything I read in The Art of the Deal, I'm thinking we can put this thing to bed for $2.2 to 2.3 billion. And, I'm being serious, I think we could get Mexico to pay for that," Meyers said.