Seth Meyers shreds the GOP on guns: You shouldn’t be able to buy an assault weapon in 7 minutes 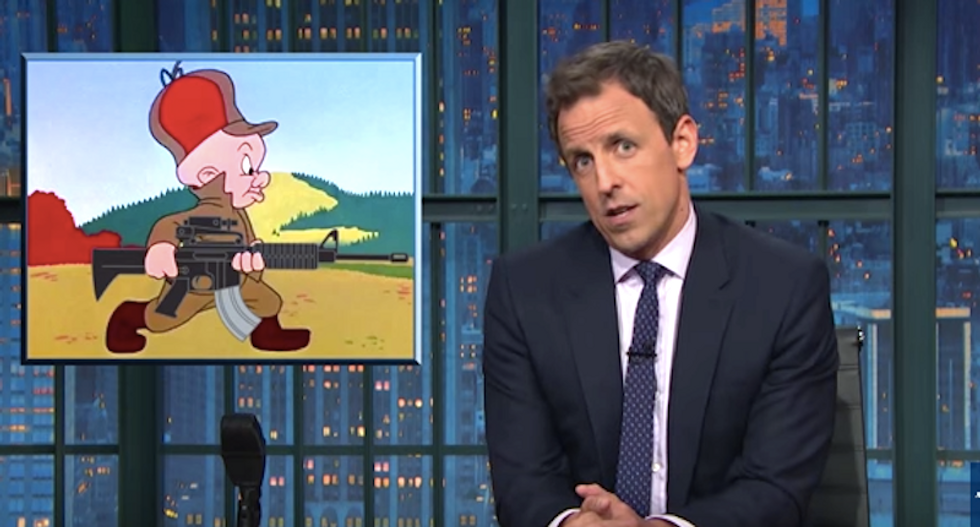 Seth Meyers called for new gun regulations to replace current laws that allow anyone with an "honest face" to buy a military-style weapon on impulse.

Democrats led by Sen. Chris Murphy (D-CT) led a filibuster for more than 15 hours to call attention to gun control legislation in the wake of the horrific Orlando massacre, but Republicans pushed back with inane arguments.

For example, Sen. Ron Johnson (R-WI) shrugged off the deadly capabilities of assault weapons, which can fire dozens of rounds per minute, by saying bombs can also kill many, many people very, very quickly.

"You can't ban bombs -- it's one of America's most cherished traditions, putting on your hunting gear, going out in the woods and just blowing up a flock of ducks," Meyers said.

Others, such as Donald Trump and Fox News' Tucker Carlson, wondered why Democrats favored a gun ban but didn't mind that Hillary Clinton traveled with an armed security team.

"Yeah, how come my pharmacist can have a big jug of Vicodin, but I can't?" Meyers said, responding to Carlson's vapid argument. "Buddy, you're a private citizen, and that's not the same as a Secret Service agent. They're professional law enforcement officers who've had to go through years of rigorous training and certification -- whereas you look as if you were born and raised on a sailboat."

Meyers said new gun control laws were badly needed to replace some of the "insane" measures on the books that allows Americans to buy powerful weapons like the AR-15 military-style rifle within minutes of spotting one in the window of a gun shop.

"Only seven minutes?" Meyers marveled. "It shouldn't take the same amount of time to buy an assault weapon that it takes teenagers to stand in a closet awkwardly staring at the ground."

Gun stores are required to run a background check on potential buyers before selling them a firearm minutes later -- but private sellers at gun shows don't always face the same obstacle.

One private dealer told a CNN reporter that he asks only for a driver's license, although he admittedly couldn't verify a forgery, and said he might deny a gun to someone he didn't trust.

"An honest face is all you need to get a gun," Meyers said. "We better hope to God Betty White never joins ISIS."

Conservatives and the gun lobby have argued for years that the Second Amendment right to bear arms is absolute, but Meyers said the constitution hasn't always been interpreted that way in U.S. history.

"For a long time, the courts, politicians and gun owners just took for granted that the Second Amendment was designed only to allow states to raise militias, which required militia members to procure their own guns," Meyers said. "It had nothing to do with home defense or hunting. As one historian put it, 'One does not bear arms against a rabbit.'"

"Well, one does," Meyers pointed out, showing a picture of Elmer Fudd carrying a shotgun. "And he'd sure as hell be a lot scarier with an AR-15."

This historical interpretation of the Second Amendment started changing around the 1970s, Meyers said, when conservatives and the NRA began to argue that the constitution had been misinterpreted for nearly 200 years.

To bolster their new argument, Senate Republicans commissioned a report in 1982 that claimed to have discovered "clear and long-lost proof that the Second Amendment ... was intended as an individual right of the American citizen to keep and carry arms."

"Long-lost proof? Did Nick Cage find a secret message written on the back of the Constitution?" Meyers wondered.

Meyers said there were many legislative options to help curb gun violence -- such as universal background checks, waiting periods and an assault weapons ban.

Democrats want to ban individuals on the no-fly list from buying guns, and even Trump has backed that measure.

"It's perfectly logical to bar suspected terrorists from buying weapons, but civil liberty advocates like the ACLU have argued that these lists should be fixed first, because they're not perfect," Meyers said. "In fact, they're famously imperfect."

Meyers cited the example of a 2-year-old boy who was unable to board a plane with his parents because his name was similar to a suspected terrorist.

"Look, I have a kid now, and I agree -- he looks suspicious," Meyers said. "But, as a rule, I think infants aren't sleeper agents. In fact, mine doesn't f*cking sleep at all."

Meyers said some sensible new regulations must be implemented to curb gun violence.

"What's clear is that anyone who buys any gun, no matter who they buy it from, should have to wait and go through a background check first, and you shouldn't be able to buy an assault weapon at all -- let alone in seven minutes," Meyers said.