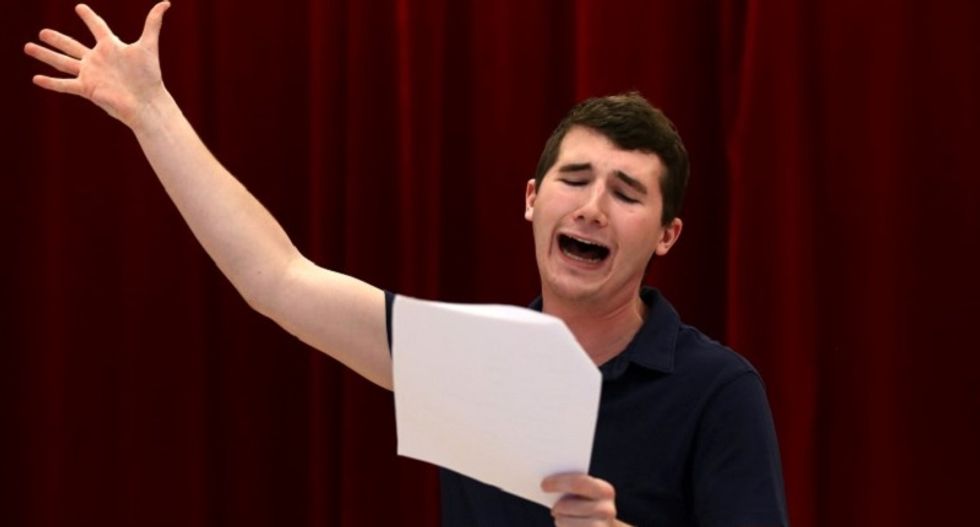 Actor Matt Weinstein sings as he auditions for new musical "Martin Shkreli's Game" based on the former chief executive officer of Turing Pharmaceuticals, at a rehearsal space in the Manhattan borough of New York, U.S., June 11, 2016. REUTERS/Carlo Allegri

Fourteen fame-hungry young men tried to out-smug each other at a small studio in Manhattan's Theater District on Saturday to prove they could play 'America's most hated man' in a new musical comedy about pilloried former drug executive Martin Shkreli.

The hour-long production, titled "Martin Shkreli's Game: How Bill Murray Joined the Wu-Tang Clan," is based on Shkreli's controversial $2 million purchase last year of the sole copy of the hip-hop group's latest album.

Set to open in July, it is a fictionalized account of comedian Bill Murray joining forces with the rappers to steal the album back.

Shkreli, the 33-year-old former chief of Turing Pharmaceuticals, sparked outrage last year and earned the title of the country's most-hated man on the internet when he raised the price of the life-saving anti-parasitic infection drug Daraprim by more than 5,000 percent.

In December, U.S. authorities arrested him on fraud charges unrelated to Daraprim, saying he ran his investment funds and companies almost like a Ponzi scheme.

"We thought, 'What kind of world is this where Martin Shkreli and Wu-Tang are thrown together?'" said the show's co-producer and lyricist Lauren Gundrum.

"It seemed like such a ridiculous thing," added Joel Esher, fellow producer and composer of the play. "Truth is crazier than fiction sometimes and we said, 'That might be a great thing to turn into a musical.'"

So did the 14 hopefuls who came to Ripley-Grier Studios on Saturday afternoon prepared to audition for the lead roles of Shkreli and Murray.

A casting call for the character of Shkreli described him as "a pharmaceutical executive; extremely wealthy and likes to flaunt it; enjoys screwing people over; outwardly on a quest for power, inwardly insecure and immature."

One auditioner, 22-year-old Matt Weinstein, flipped over a music stand pretending it was a chess board - a passion of Shkreli's - to prove his versatility.

"At first I was like, 'What the you-know-what is this show about?' I've done weird jobs in the past but this was different," he said.

Shkreli made further headlines in February - and increased public hostility toward him - when he refused to answer questions by a Congressional committee. Instead he laughed, twirled a pencil and yawned, and later called the lawmakers "imbeciles" on Twitter.

"I want you to really play up the smugness right now," one judge asked an auditioner. "I want you to pretend you know more than anyone else in this room no matter what you are talking about. Like, if you're talking to an astrophysicist, you still know more about astrophysics."

Shkreli publicly acknowledged the production, which is scheduled to premiere on July 19 at the Midtown International Theater Festival in New York, on his official Twitter page on June 8.

He most recently called the musical "an inept idea." However, he has also expressed excitement about the production.

"I've never acted or sang before but I believe @shkrelisgame will be the greatest musical ever made. #pleasedonate," Shkreli wrote. "I will reluctantly star in and fund this new musical @shkrelisgame. Sorry all you Broadway bros but my time is now."

So far the project has raised $2,475 dollars on crowdfunding site Indiegogo, with no indication that Shkreli has donated, at least under his own name. The producers hope to reach $6,500 dollars by the time of the premiere to pay the actors and bands and other costs.

They did not say when they would choose which actors would play the roles.