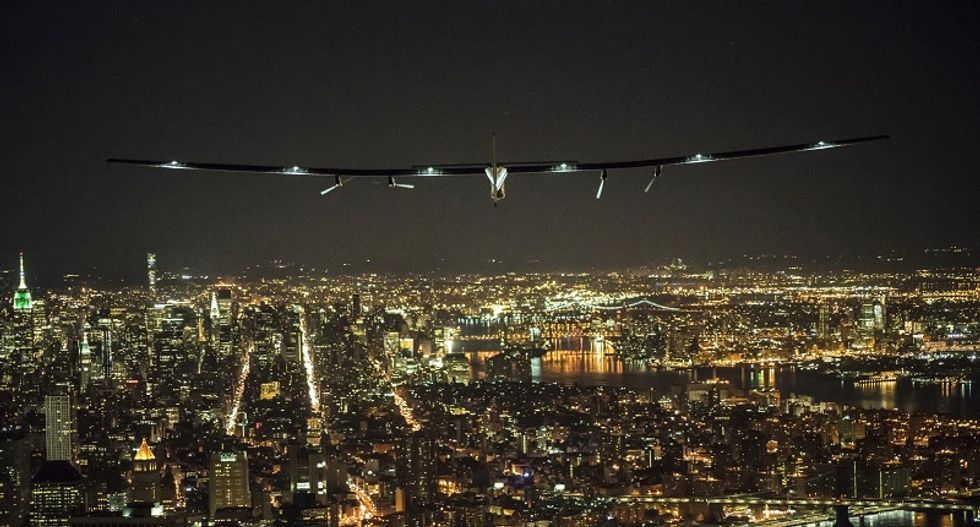 Solar Impulse 2, the solar airplane, piloted by Swiss adventurer Andre Borschberg, flies over Manhattan, U.S. on June 11, 2016 shortly before landing at John F. Kennedy airport. Leg 14 was the shortest so far on the planes trip around the globe. Andre Borschberg, Jean Revillard/SI2/Handout via Reuters

A solar-powered airplane finished crossing the United States on Saturday, landing in New York City after flying over the Statue of Liberty during its historic bid to circle the globe, the project team said.

"Such a pleasure to land in #NYC! For the 14th time we celebrate sustainability," said the project's co-founder Andre Borschberg on Twitter after flying over the city and the Statue of Liberty during the 14th leg of the trip around the globe.

The Swiss team flying the aircraft in a campaign to build support for clean energy technologies hopes eventually to complete its circumnavigation in Abu Dhabi, where the journey began in March 2015.

The solar craft's cruising speed, akin to that of a car, required pilots to take up meditation and hypnosis in training to stay alert for long periods.

Borschberg alternates with fellow pilot Bertrand Piccard at the controls for each segment of what they hope will be the first round-the-world solar-powered flight.

On April 24, Piccard landed in San Francisco, completing a trans-Pacific crossing after a nearly three-day trip that began in Hawaii. The flight took more than three times the 18 hours Amelia Earhart took to fly solo from Hawaii to California in the 1930s.

The propeller-driven Solar Impulse flies without a drop of fuel and its four engines are powered solely by energy collected from more than 17,000 solar cells built into its wings.

Surplus power is stored in four batteries during the day, to keep the plane aloft on extreme long-distance flights.

In a precursor of their globe-circling quest, the two men completed a multi-flight crossing of the United States with an earlier version of the solar plane in 2013.

(Reporting by Brendan O'Brien in Milwaukee; Editing by Mark Potter)