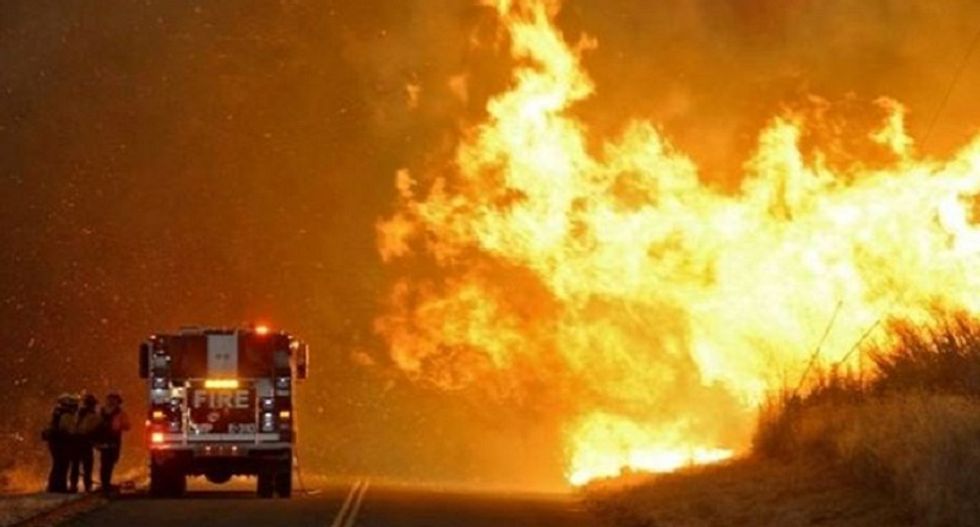 A wildfire fed by parched land and high winds spread in Southern California on Saturday, prompting hundreds of people to evacuate their homes as the blaze formed destructive columns of flames known as fire tornadoes.

The so-called Sherpa Fire in Santa Barbara County, about 90 miles (145 km) northwest of Los Angeles, had burned through about 7,650 acres (3,100 hectares) by midday Saturday, officials said. Firefighters increased containment after early evening "sundowner winds" that can whip through the area's coastal canyons did not emerge overnight on Friday.

More than 1,200 firefighters have been dispatched to battle the flames being fueled by dry chaparral and grass in coastal canyons about 20 miles (32 km) northwest of the affluent city of Santa Barbara.

"Now is the time to gather your family members, pets and important documents in case you need to leave quickly," the Santa Barbara Sheriff's Office warned people living in areas threatened by the fire.

The fire broke out on Wednesday and has been expanding since then. Possible sundowner winds are on tap for Saturday that could fan the flames and temperatures were set to top 100 degrees Fahrenheit (37.8 degrees Celsius) over the weekend.

The fire is one of a series of blazes in western and southwestern states brought about by high temperatures and a prolonged dry spell. One of the largest has been southeast of Albuquerque, New Mexico, that has destroyed about two dozen homes and forced evacuations.

More than 700 personnel were fighting the so-called Dog Head Fire that has burned through about 17,600 acres (7,125 hectares) of timber and logging zones in four days. Governor Susana Martinez this week declared a state of emergency to free up resources to fight the blaze.

For an area stretching from Southern California to southern Nevada and into Arizona, the National Weather service has put out "red flag warnings," indicating conditions that could lead to dangerous fires.

It has also issued a heat advisory for large parts of New Mexico, Texas and Oklahoma.