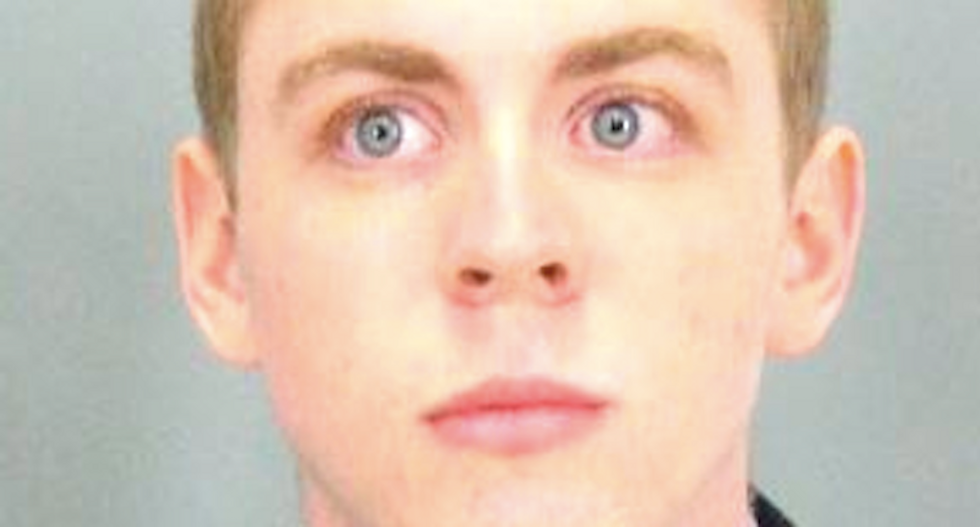 The father of a former Stanford University swimmer convicted of sexually assaulting an unconscious woman set up an online fundraiser to help pay legal fees for his sex offender son.

Brock Turner was sentenced last week to just six months in a county jail, with a possibility of three months off for good behavior, and his family and friends have been raising money to help the former student pay for his legal defense, reported WHIO-TV.

A family friend set up a Facebook page in early May, which has since been deleted but can still be seen in an online cache, asking supporters to help Turner's parents, Dan and Carleen.

"As a lifelong friend, mother and person who has watched this family grow, I am reaching out to you on behalf of Dan Turner and Carleen Bradfield Turner," wrote Joni Magnus-Ramsey. "They are dealing with a monumental life-changing and tragic situation with Brock and their expenses continue to mount. As a mother and friend, I would do anything to help my child and save him."

The 20-year-old from Dayton, Ohio, was convicted of three felonies, including assault with intent to rape, for sexually assaulting a woman who was unconscious from drinking, and Turner blames his own alcohol consumption for the attack.

Judge Aaron Persky cited the former swimmer's alcohol use, along with positive character references from Turner's friends, when he set aside the maximum 14-year prison term in favor of the more lenient penalty.

“A prison sentence would have a severe impact on him,” Persky wrote in his sentencing order. “I think he will not be a danger to others.”

The sentence, and the victim's anguished impact statement, have sparked widespread outrage and provided a clear example of how race and privilege can influence legal consequences.

Dan Turner, the sex offender's father, has also provoked intense anger for complaining that incarceration was “a steep price to pay for 20 minutes of action,” because his son would not be able to eat his preferred “big ribeye steak.”

A customer service representative for Wright-Patt Credit Union confirmed to the TV station that Dan Turner had created an account so supporters could donate money to help pay legal fees in the case.

It's not clear how much money has been deposited into the account, which remains active.

One of Turner's supporters, a childhood friend who begged Persky for a lighter sentence, has suffered some blowback after her letter of character reference was published by NYMag.

“I don't think it's fair to base the fate of the next ten + years of his life on the decision of a girl who doesn't remember anything but the amount she drank to press charges against him,” wrote Leslie Rasmussen, the longtime friend. "I am not blaming her directly for this, because that isn’t right. But where do we draw the line and stop worrying about being politically correct every second of the day and see that rape on campuses isn’t always because people are rapists.”

Rasmussen plays percussion for the band Good English -- which was promptly disinvited from several upcoming performances in both New York and Ohio.

The Northside Festival in Brooklyn dropped the band, which also had concerts canceled at the Dayton Music Art & Film Festival and Rumba Cafe in Columbus, Ohio.

Rasmussen issued a statement after her band was dropped from performances, saying her letter to the court was misunderstood and submitted at the judge's request.

"I know that Brock Turner was tried and rightfully convicted of sexual assault," Rasmussen told Brooklyn Vegan. "I realize that this crime caused enormous pain for the victim. I don’t condone, support, or sympathize with the offense or the offender. I was asked by a court in California to provide a character statement as a standard and necessary part of the sentencing process. I believe that Brock’s character was seriously affected by the alcohol he consumed, and I felt that the court needed to consider this issue during their sentencing deliberations."

Marco Saccaggi, a family friend who lived near the Turners in Oakwood before moving with NCR Corp. to Georgia, said he would donate to the family's legal defense fund.

He said the Turners were “very concerned” for their son and the loss “the bright future he had in front of him,” reported the Dayton Daily News.

“My wife remembered he was always the first one to say ‘seat belts’ in the car,” Saccaggi said. “For us, it was really a shock. It is not the Brock we know.”

Saccaggi declined to offer an opinion of the judge's sentence.

“It is not for me to judge,” Saccaggi said. “We were not there, we don’t know the facts. We trust the system.”