Stephen Colbert calls for action after Orlando: ‘Hate wants us to be too weak to change anything’ 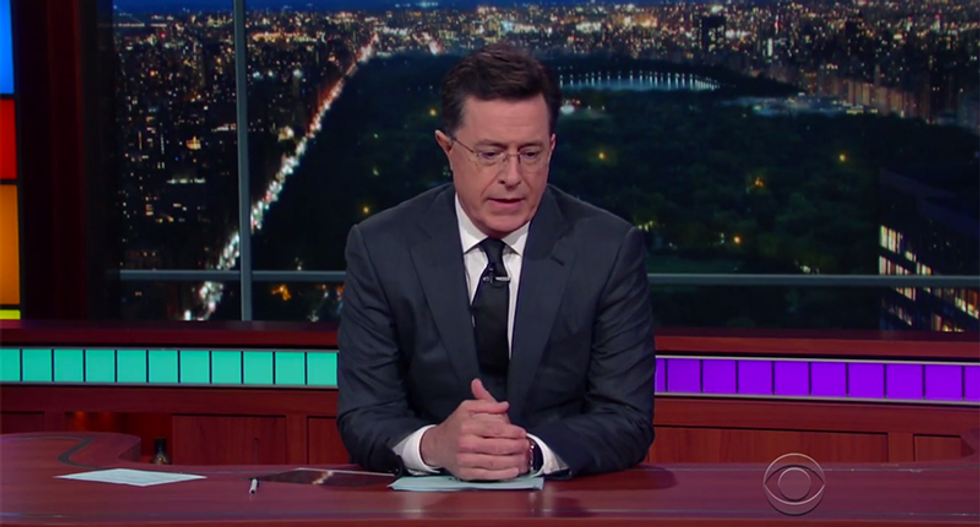 After the horrific mass shooting in Orlando, Florida, Sunday, late-night hosts had the arduous task of helping their audience deal with it. Stephen Colbert began his show with a monologue he acknowledged he's had to give before, and asked that this time we not become paralysed with despair and say, "Well, that's the way the world is now."

"We each ask ourselves, 'What can you possibly say in the face of this horror?'" Colbert began. "But then sadly you realize you know what to say because it's been said too many times before. You have a pretty good idea of what everybody's going to say. You know what a president, whoever it is, will probably say. You know what both sides of the political aisle will say. You know what gun manufacturers will say."

Colbert admitted that even he has had to do this before, so we probably know what he'll say too. "It's as if there's a national script that we have learned." He continued. "And I think by accepting the script we tacitly accept the script that the script will end the same way every time. With nothing changing."

Other than the survivors of the victims, nothing will change, Colbert explained. For them, nothing will ever be the same, but for the rest of us, we accept this as our reality and move on.

"It's easy, it's almost tempting to be paralyzed by such a monstrously hateful act. To despair and say, 'Well, that's the way the world is now.' Well, I don't know what to do," Colbert admitted. "But I do know that despair is a victory for hate. Hate wants us to be too weak to change anything. Now, these people in Orlando were apparently targeted because of who they love. And there have been outpourings of love throughout the country and around the world. Love in response to hate. Love does not despair. Love makes us strong. Love gives us the courage to act. Love gives us hope that change is possible. Love allows us to change the script. So, love your country. Love your family, love the families of the victims of the people of Orlando, but let us remember that love is a verb and 'to love' means to do something.'"

By Daniel Trotta (Reuters) - The family of an unarmed Black man who was shot dead by a white store owner in Cincinnati asked the U.S. Justice Department on Wednesday to open a civil rights investigation into the case after the local prosecutor declined to bring any charges. Da'Shawn Tye, 19, was shot at the Mages Grocery in the Ohio city's Price Hill neighborhood on Nov. 19. On Dec. 9, Hamilton County Prosecutor Joseph Deters announced no charges would be filed, saying Tye was attempting to rob the store for the third time. Tye was shot three times, twice in the chest and once in the pelvis, h...