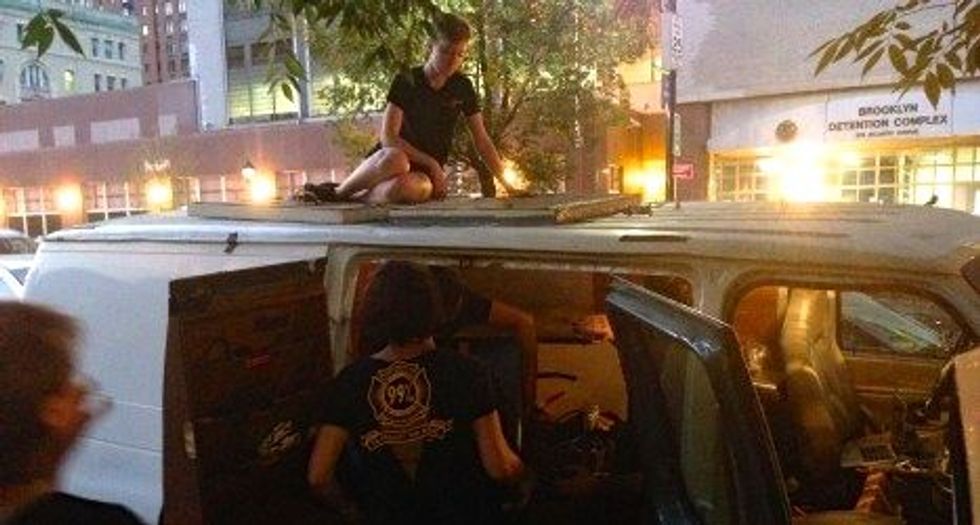 Last night in Downtown Brooklyn, dozens of activists organized by the international advocacy campaign “Support. Don’t Punish” protested the War on Drugs in a dramatic visual way. They projected powerful images of people who use drugs onto the outside of the Brooklyn Detention Complex, where many people arrested for drug-law violations are confined.

The protest happened along with demonstrations of different kinds in over 150 cities around the world. They all marked the annual “Support. Don’t Punish” day of action, which began in 2013 as a counterpoint to the United Nations’ annual International Day Against Drug Abuse and Illicit Trafficking. Repressive governments around the world have frequently marked that day by executing drug-war prisoners or engaging in anti-drug user crackdowns.

The images were projected onto the Detention Complex building guerrilla-style, from a white van parked across the street.

They were portraits of numerous current and former drug users, together with words describing their good qualities and positive roles in life—with the word “criminal” crossed out.

They formed a simple but effective message.

Heather Haase, who works with the International Drug Policy Consortium and helped organize last night’s event, described the concept as “a series of moving images of people who have used drugs or do use drugs. It will depict them as they actually are—as humans.”

She told me that the wider campaign “works to improve drug laws … based on public health and human rights. Some of the tenets are that the system itself is broken and in need of reform, and that people who use drugs should not be criminalized, and that people who are involved in low-level drug trade should also not be criminalized—and definitely shouldn’t be subjected to disproportionate criminal punishments.”

Sarah Merrigan, a senior at the University of Nebraska who has written for The Influence, was at the protest representing Students for Sensible Drug Policy.

“Students for a Sensible Drug Policy is a grassroots organization of students who realize that the War on Drugs has failed,” she said, adding that her organization is now represented in up to 15 different countries. “The vast majority of our chapters are undergrads,” she said, “but we have a growing number in law schools, master’s programs, etc.”

Jerry Otero, a harm reduction advocate who specializes in educating and working with young people, was also present. “I’ve always believed that the work we do with each other has to come from love,” he told me. “So ‘Support. Don’t Punish’ is really not so radical an idea—but the fact that we don’t do it is kind of fucked up, rather.”

“Judge me on who I am, not what I use. Drug use should not be a crime.”

Donald Trump paid a key witness in the Mar-a-Lago and Jan. 6 cases only eleven days after the FBI conducted a search at Mar-a-Lago.

"Tonight, Trump handed a loss by the special master that he put forward for the job and it's a pretty significant loss because [Special Master Raymond Dearie] is calling Trump's bluff by questioning the very heart of his argument in the Mar-a-Lago documents case," CNN's Erin Burnett reported.

On Tuesday, writing for Vanity Fair, columnist Bess Levin outlined how the first hearing held by special master Raymond Dearie in the review of highly classified documents the FBI seized from former President Donald Trump's Mar-a-Lago country club was a disaster for the former president.

Specifically, Levin wrote, Dearie — a widely-respected senior federal judge from Brooklyn — effectively eliminated one of the most prominent arguments Trump has been making in public: that he used his presidential authorities to secretly declassify the documents himself.