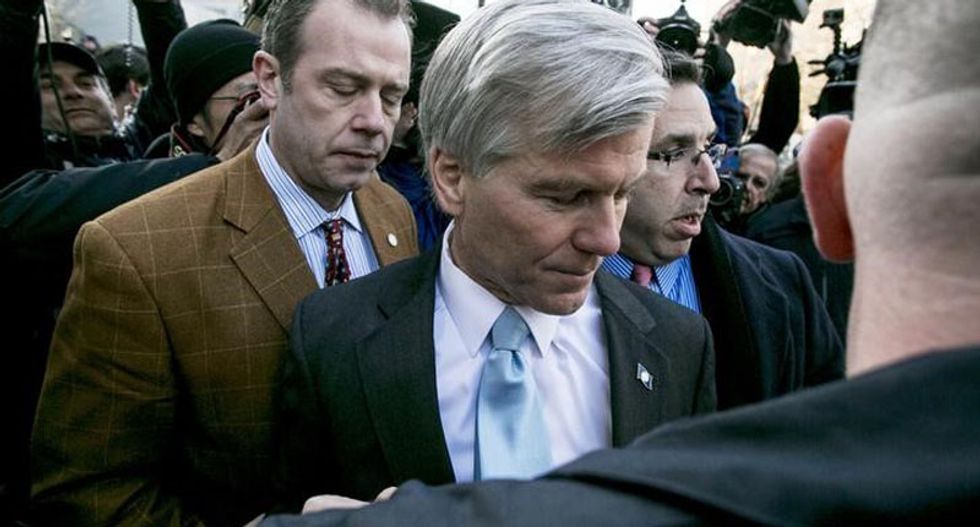 Former Virginia Governor Robert McDonnell is surrounded by members of the media after his sentencing hearing in Richmond, Virginia January 6, 2015. REUTERS/Jay Westcott

The U.S. Supreme Court on Monday threw out Republican former Virginia Governor Robert McDonnell's corruption convictions in a ruling that could hem in federal prosecutors as they go after bribery charges against other politicians.

The court ruled 8-0 in overturning McDonnell's conviction for accepting $177,000 in luxury gifts and sweetheart loans for him and his wife from a wealthy Richmond businessman seeking to promote a dietary supplement, finding that it did not constitute a criminal act under federal bribery law. McDonnell was convicted in 2014 and sentenced to two years in prison but had remained free pending the outcome of his appeal.

The issue before the court was whether the gifts and money were part of an unlawful arrangement in which a sitting governor, in return for accepting them, employed the power of his office to benefit businessman Jonnie Williams.

The court ruled that the prosecution's broad interpretation of the bribery law made it unclear whether McDonnell was convicted of conduct that was actually illegal. The court sent the case back to lower courts to determine if there is sufficient evidence for a jury to convict McDonnell. He could still face a new trial.

Under the court's new interpretation of what "official acts" can be constituted as bribery, "setting up a meeting, calling another public official or hosting an event does not, standing alone, qualify as an official act," Chief Justice John Roberts wrote for the court.