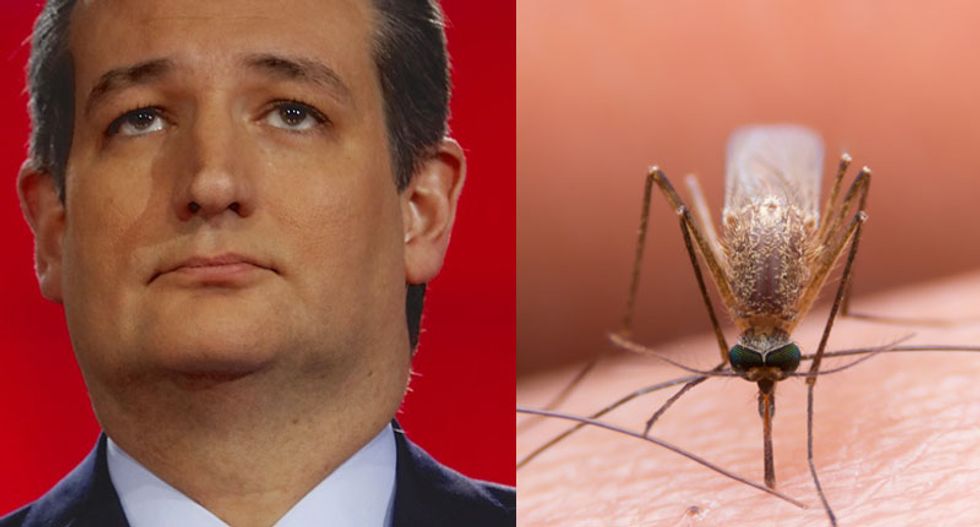 Texas is scrambling to stop a potential Zika emergency after floodwaters left pools of standing water -- but when it came time for Texas Sen. Ted Cruz to vote on federal funding to fight the virus, he was no where to be found, according to RealClearPolitics.

KBTX reports that while no declaration has yet been issued, Federal Emergency Management Agency (FEMA) workers were on the ground this week. And while Texas officials are scrambling to deal with the Zika threat, Republicans on Capitol Hill have been blocking a federal bill aimed at fighting the virus.

Cruz was one of three senators who did not vote on a bill to spend $1.1 billion to fight it.

“With all of the flooding, all of the rainfall in our area, this is a state of emergency,” Houston Mayor Sylvester Turner said, according to the Houston Press. “What we don't want to do, we don't want to wait like we did with AIDS and HIV, assuming that it impacted people on the other side of the globe, were slow to respond, and then it became a global epidemic. We want to get out in front of this.”

Turner is urging Abbott to declare a public health emergency to counter spreading of the virus.

Twenty-three Republicans voted to join Democrats to pass the Zika bill and 29 voted against it. Cruz and two others, including Vermont Sen. Bernie Sanders and Wyoming Republican Mike Enzi did not case votes.

Abbott, in turn, is asking Obama to declare a disaster to release funding to help the state cope with the storm fallout.

“I have determined that this incident is of such severity and magnitude that effective response is beyond the capabilities of the state and affected local governments, and that supplementary federal assistance is necessary to save lives; to protect property, public health and safety; or to lessen or avert the threat of a disaster,” Abbott wrote in a letter to Obama.

Severe storms and flooding in Texas have resulted in a large amount stagnant water -- which attracts mosquitoes that potentially carry and spread Zika.

Abbott's request comes amid 1,444 evacuations along with hundreds of other rescue and emergency actions statewide, including fatalities.

Weeks later, little progress has been made.

"Republicans and Democrats worked together to pass a bill here in the Senate to provide funding and resources," Senate Majority Leader Mitch McConnell said Wednesday, according to the Hill. "The House passed its own version. We're ready to go to conference and complete a final bill. I'll have more to say on that soon."

According to Patch, the state is working with the federal government to secure funding to help communities fight the virus.

“Texas is working with our local and federal partners to ensure Texans are protected from the Zika virus,” the governor said in a prepared statement. “With the recent floods, and as we enter the height of mosquito season, I encourage Texans to take precautions to protect themselves from mosquito exposure and heed all warnings and recommendations from health officials.”

Meanwhile, on Capitol Hill, Democrats have set a floor of $1.1 billion in funding to fight Zika while Republicans have agreed to $622 million. The Hill reports it remains unclear how the two parties will work out their differences.