Texas GOPer shreds Stanford judge: 'The punishment for rape should be longer than a semester' 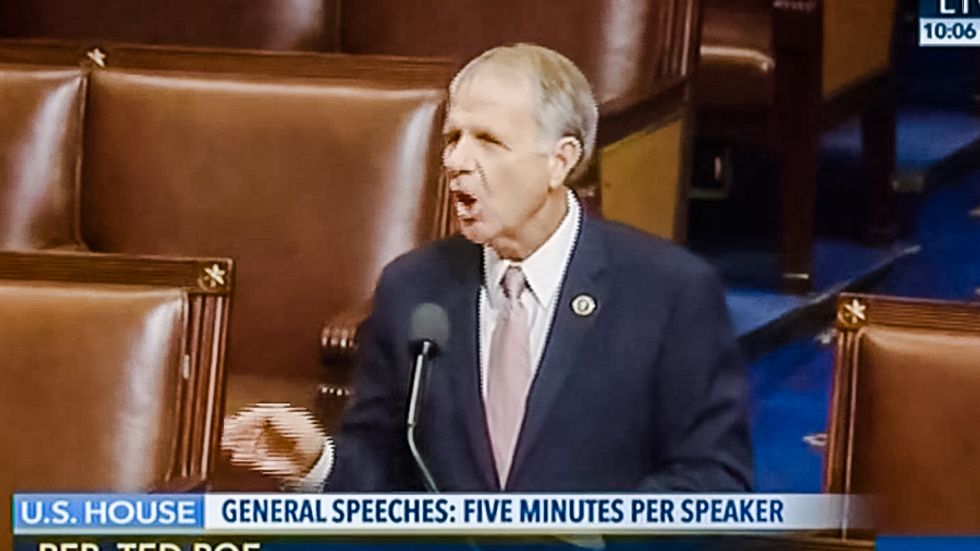 Conservative Texas Congressman Ted Poe (R) on Thursday lashed out at Judge Aaron Persky after he sentenced former Stanford student Brock Turner to six months in jail for the sexual assault of an unconscious woman.

"The woman, just 22 years of age at the time, was being raped and the rapist was caught in the act," Poe explained in a speech delivered on the floor of the U.S. House of Representatives. "Brock was found guilty of the sexual assault on three counts. His sentence, a mere six months in prison and three years probation."

"Because the judge said a prison sentence would have a 'severe impact' on him," the Texas Republican continued. "Well, isn't that the point? Mr. Speaker, the punishment for rape should be longer than a semester in college."

Poe, a former criminal court judge, read a portion of the victim's emotional statement, and then called for Persky to be removed from the bench.

"This judge got it wrong," he insisted. "There's an archaic philosophy in some courts that sin ain't sin as long as good folk do it. In this case, the court and defendant's father wanted a pass for the rapist because he was a big shot swimmer."

"The judge should be removed," Poe remarked. "The rapist should do more time for the dastardly deed that he did that night."

Poe added that he hope an appeals court would "overturn the pathetic sentence and give him the punishment he deserves."

"The entitlement mentality of being a good college athlete and self-righteousness do not trump justice," the lawmaker declared. "The criminal has given her a life sentence of mental pain, anguish and turmoil. When rape occurs the criminal is trying to steal the very soul of the victim."

"Justice demands the judge be removed!" he exclaimed. "And we, the community, must assist the victim in all possible ways. Because rape is never the fault of the victim. And that's just the way it is."