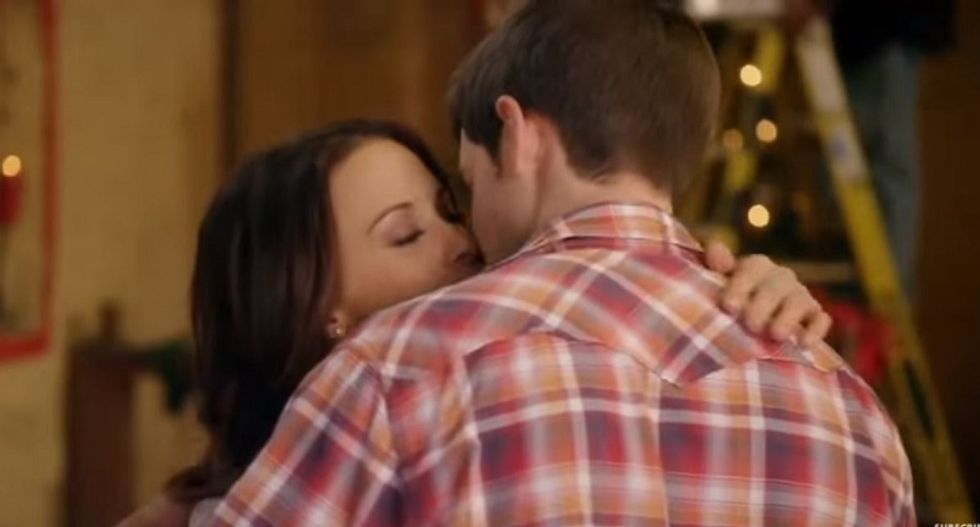 If you've been wondering why no one has made a movie yet about Christians trying out online dating, wonder no more, for it is here. Christian Mingle is streaming on Netflix, and according to a Vague Visages review, it's as horrible as it sounds.

Movie trailers are theoretically supposed to hook viewers in, so it seems the reviewer has a point. The trailer for the film, posted below, is a cringe-inducing cheese fest that shows a godless, lovelorn 30-year-old named Gwyneth get looped into Christianity by the dream boat she meets while trying -- you guessed it -- ChristianMingle.com.

It is, then, a commercial stretched into a whopping hour and 43 minutes. If nothing else, it's a truly Herculean coup in stamina by the writers.

The film, according to Vague Visages writer Jacob Oller, is a bizarre meditation on being true to oneself while simultaneously shape-shifting to suit a potential suitor.

"Authenticity, not to oneself, but to a specific way of worship, is hammered over and over," he writes. "This is the film’s one plot point which is encased by dozens of metaphors and allegorical situations, because if there’s one thing these Christians know, it’s that nothing is more meaningful than repetition."

Gwyneth is seduced by the smiley shininess of the churchgoers she encounters while she, Eve-like, tries to trick her man, Paul, into thinking she is a bonafide Christian.

"There was something about all them," she observes. "Everyone seems so happy."

But Paul's mom has the keen senses of an adroit bathroom gender monitor. She seems to have sniffed out Gwyneth's devious ways.

"There is something not genuine going on there," she says. "You're just being blinded by love."

It's not like Gwyneth robbed a bank, but everyone has their standards.

The implausibility of the movie is hilariously summed up by this passage, written by Oller.

"Gwyneth’s job as a brand manager (a vice president, no less, though the film doesn’t seem to understand what that could possibly mean) hocking a miracle baldness cure for her boss (Stephen Tobolowsky, dressed as an admiral for some reason and hopefully putting a child through college) invites the comparison of leaps of faith, then swiftly undermines it," he writes. "When hammering the mysterious and miraculous wonders of an unknowable God, snake oil juxtaposition may be a detrimental choice."

You get the feeling Oller doesn't like Gwyneth's love interest.

"This date, Gwyneth’s fellow Christian Mingler, is Paul (Jonathan Patrick Moore)," he writes. "A psychopathic Norman Bates type, Paul smiles soullessly like a demon inhabiting the husk of a temporally-displaced Leave It to Beaver extra."

Then, even more scathingly, "Paul is a walking, talking loaf of white bread whose personality fizzles in comparison to particularly eye-catching background props."

It is indeed very difficult to feel sorry for a man who crinkles up his face and says, "I just wish you hadn't lied" to a date. Welcome to real life, sir.

"I haven’t even gotten to the sassy black friend (she says 'Say what?!'), a knock-knock joke with such poor editing that it gave me whiplash or a story about a drifter named Wood who sees Jesus in a piece of driftwood. Really," a seemingly exhausted Oller writes.

Spoiler alert: According to Wikipedia, Gwyneth converts to Christianity and quits her job because it requires her to lie -- but not before Paul is betrayed by finding her Christianity for Dummies book. She travels to Mexico to teach the children, but Paul eventually finds her and proposes.

So it has a happy ending, with Gwyneth winning over the "walking talking loaf of white bread" and avoiding eternal damnation to boot.

Watch the trailer, if you dare, as posted to YouTube, here: