The Dalai Lama brushes off anti-immigration GOP: 'All white Americans come from outside' 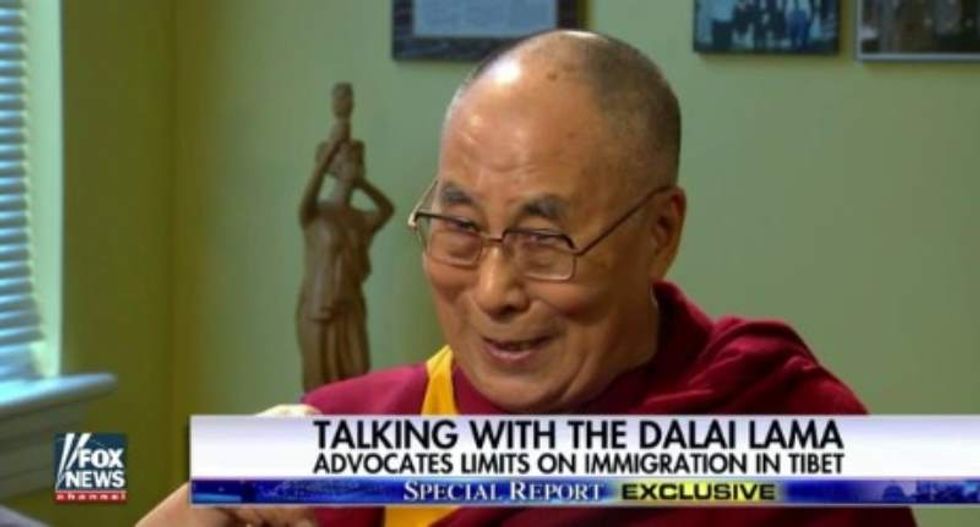 The Dalai Lama laughed when Fox News' Bret Baier asked if his stance on immigration lined up with conservative lawmakers, Media Matters reported.

"You're in essence a refugee," Baier said. "You have now in Tibet an immigration issue with Chinese coming into Tibet to work. So when you hear about the U.S. grappling with that issue, what do you think from your perspective? Some politicians in the US are making the same arguments about immigration and border security and you know, limiting the number of people coming in."

"All white Americans come from outside," the Dalai Lama replied, before seemingly chuckling. "So I think if the several millions or hundred million come from outside, then you have to think seriously. A few millions, easily into this country. No problem."

The spiritual leader also weighed in on the mass shooting attack in Orlando on Saturday, calling into question Baier's suggestion that the gunman could have "killed in the name of religion."

"The very word 'Muslim terrorist' -- that, I think is wrong," he said. "Terrorist is a terrorist. They are not strictly speaking, strictly speaking, they are not practicing religion. The general, genuine Muslim practitioner, wonderful people. And Islam, teach this practice of love. And they pray to Allah, Allah consider you see, is love."

"But the main threat that the US seems to be facing is from that one place," Baier pressed. "A radical version -- a perverted version -- of that religion, right?"

"These people, I do not consider genuine Muslim practitioners," the Dalai Lama replied.