The name’s Bond, James Bond … or should it be Jane? 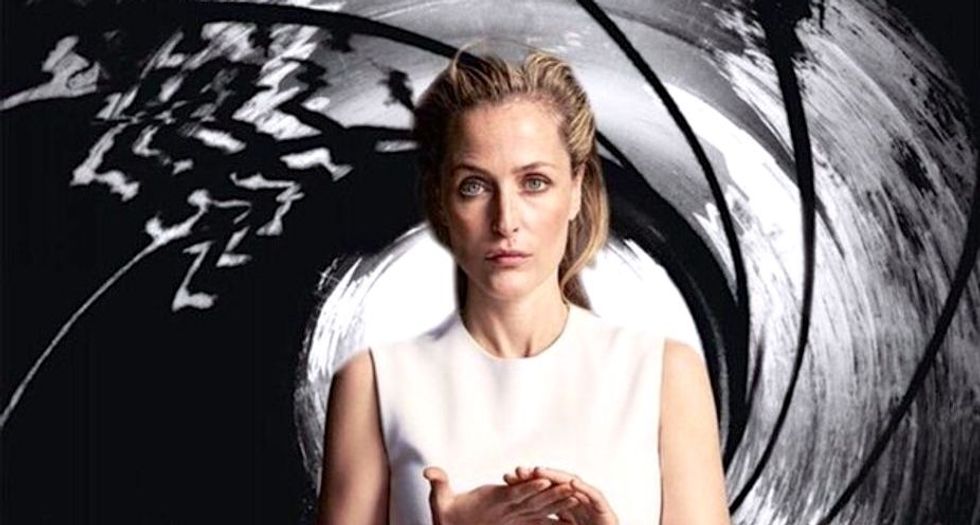 After rumours that Daniel Craig has hung up his Bond boots once and for all, speculation about who will take his place are rife. Will it be Idris Elba? Henry Cavill? Tom Hiddleston? While Hiddleston dismissed his chances, X-Files star Gillian Anderson threw her hat into the ring, tweeting a picture of herself Photoshopped onto the gun barrel background of the James Bond films. It was liked almost 30,000 times – many evidently think it’s time for James to become Jane. Two academics with opposing views make their cases.

No: James is forever

You know the silly “news” season is upon us when the internet starts buzzing with speculation that Gillian Anderson is to be the next James Bond. My own view is that this just ain’t gonna happen.

On the one hand the idea of casting a woman as James Bond offends the Ian Fleming purists, who see it as political correctness gone mad. Bond, they say, was always conceived as a British white male and to make him anything else would be tantamount to sacrilege. Bond is an icon of popular culture and shouldn’t be messed with. You wouldn’t turn Indiana Jones or Luke Skywalker into a woman, any more than you’d want a male Bridget Jones.

On the other hand there are those who argue that James Bond is an ideological and cultural product of a bygone world and that societal attitudes towards gender have changed so profoundly since the 1950s that it shouldn’t matter if he becomes a woman. Two women, Stella Rimington and Elizabeth Manningham-Buller, have both been heads of MI5, and the Bond films saw Judi Dench as “M”, head of the British Secret Service, in place of the elderly Victorian patriarch of Fleming’s novels.

The real issue at stake here is the under-representation of women in strong roles in popular culture. It has to be acknowledged that the Bond films have been complicit in this process: too many “Bond girls” over the years have been feather-brained bimbos cast more for their sexual attractiveness than intelligence. Honor Blackman in Goldfinger (1964) and Diana Rigg, in On Her Majesty’s Secret Service (1969), were honourable exceptions, but the popular “eye candy” image of the “Bond girl” remains. Were we really supposed to accept Denise Richards as a nuclear scientist wearing hotpants in The World is Not Enough (1999)?

But the idea of a cinema action heroine is nothing very new. Pearl White was the original “Serial Queen” in The Perils of Pauline in the silent era and might be regarded as the forerunner of contemporary adventure heroines such as Lara Croft and Sarah Connor. And television has brought us Emma Peel, Buffy, Sydney Bristow and Nikita, all of whom could take care of themselves in a fight and weren’t reliant on a man to come to the rescue.

We don’t need to turn James Bond into a woman. Instead, we just need similar films with female leads. Sara Paretsky’s V I Warshawski books have never had a fair crack in the movies, while Anderson would in my view be ideal casting as Patricia Cornwell’s Kay Scarpetta. There’s a Wonder Woman movie in the pipeline, and I’m sure she’ll be no helpless damsel in distress. And Lara Croft is surely due a return to the big screen. I doubt there’ll be anyone clamouring to cast a man in these roles.

In the wake of Anderson’s “Jane Bond” tweet, more women have declared their interest in being the next Bond. Some in the media have expressed dismay at the prospect, but most of the reasons floated for not having a Jane Bond don’t really stand up.

Many believe Fleming’s vision of Bond was a man who is “suave and womanising but utterly dedicated to queen and country” and that, therefore, he should never change. But Fleming thought of his creation as a parody of imperial spy fiction, saying: “If one has a grain of intelligence it is difficult to go on being serious about a character like James Bond.”

Some argue that Bond is a cinematic icon and has reflected the changing state of masculinity for more than 50 years. Again, Fleming thought his readers would recognise the sexism and racism of Bond as a joke. Having a woman (and a woman of colour especially) take on the role might give the franchise a chance to expose the silliness of thinking that Bond represents the zeitgeist of “what’s considered desirable and admirable in a man at any given moment”.

There is also the argument that Jane Bond can’t be a victory for women because Bond represents the patriarchy. Worrying whether or not she would “sit oddly with the vision of a world in which women leaders effect progress” caricatures feminism as a political project that depends on women at the top to succeed. That said, feminist criticism of the media has long pointed out the symbolic annihilation of women on screen and how their absence contributes to their marginalisation in politics. Jane would at least be a savvy retort; though much like Judi Dench’s M, we should probably expect her to be a temporary one.

Claiming Jane Bond won’t do well at the box-office and therefore will be used as an excuse by studios not to make blockbusters starring women is painfully circular reasoning. The many films starring women that do make good money (such as Thelma and Louise, Charlie’s Angels, The Hunger Games) don’t often convince the studios to make more like them, so if they can ignore those films, Jane Bond can ignore them.

It is also true that the gender switch won’t fix the wider problem of gender inequality in the film industry, nor did Kathryn Bigelow’s Oscar win or Jane Campion’s Palm d’Or. Inequality in the industry is structural and needs systematic change – onscreen representation alone isn’t going to do that.

So then, why shouldn’t there be a Jane Bond? She might reinvigorate the franchise. Or, she might kill the Bond icon. Either way, it’s better to be fearless, like Judi Dench’s M: “If you think for one moment I don’t have the balls to send a man out to die, your instincts are dead wrong.”