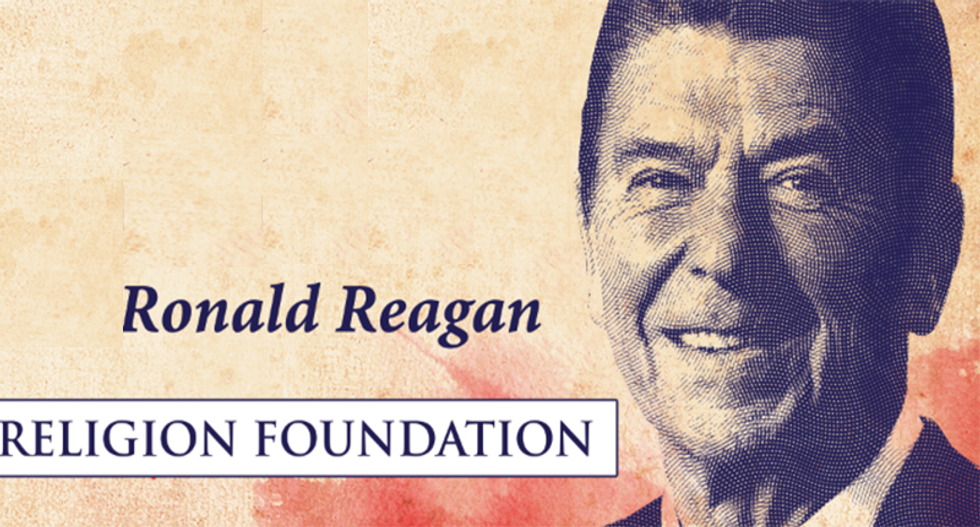 Former President Ronald Reagan's son and namesake Ron Reagan is literally the poster-person against religion. While the younger Reagan has been doing ads on news channels for the Freedom from Religion Foundation, it will be his father's words that will hover over the Republican National Convention in Cleveland, Ohio in July.

"We establish no religion in this country... Church and state are, and must remain, separate," the billboard will read.

The quote is part of a longer statement Reagan made in 1984 to Temple Hillel and Community Leaders in Valley Stream. "We in the United States, above all, must remember that lesson, for we were founded as a nation of openness to people of all beliefs," Reagan said. "And so we must remain. Our very unity has been strengthened by our pluralism. We establish no religion in this country, we command no worship, we mandate no belief, nor will we ever. Church and state are, and must remain, separate. All are free to believe or not believe, all are free to practice a faith or not, and those who believe are free, and should be free, to speak of and act on their belief.”

Co-President of the Freedom from Religion Foundation, Annie Laurie Gaylor, said in a statement that this particular message was important at this point in history.

“The RNC needs to be reminded that our nation is predicated on a godless and entirely secular Constitution,” she said. “The fate of our Establishment Clause hangs in the balance of the election. We’re not voting for the next president — we’re voting for the next Supreme Court justice.”

The local chapter director, Marni Huebner-Tiborsky, agreed that the message is an important one for Republican leaders to remember. "This billboard couldn't be any more timely, and is definitely needed to remind our political leaders and the public that political campaigns should stick to a secular platform, where real change can happen," she says.

Republican Party presidential nominee Donald Trump met with religious leaders last week and unveiled his evangelical advisory committee with former Rep. Michele Bachmann (R-MN). Trump does not have an extensive track record with religion other than to attack others for their beliefs. Though this was enough for evangelical James Dobson to call Trump a "baby Christian."